Several longtime incumbents across North Texas were re-elected to the U.S. House of Representatives Tuesday night, while a familiar face to Dallas County residents now finds himself in Central Texas.

In Texas' 17th Congressional District, a familiar name to many Texans was on the ballot: Democrat Wendy Davis. The former state Senator fell short challenging incumbent Rep. Chip Roy (R-Austin), who was elected to his second term. 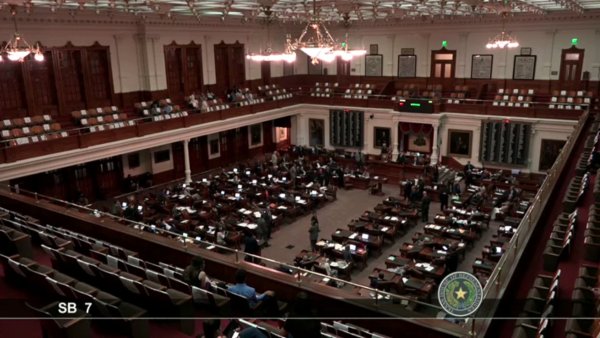 Rep. Ron Wright (R-Arlington) was re-elected to a second term in the House of Representatives, defeating Democrat Stephen Daniel.

Wright was elected two years, taking the seat of the retiring Joe Barton, who held it for 34 years.

Despite nearly four decades as a Republican-held seat, the district was one of 10 in Texas the Democratic Congressional Campaign Committee is targeting.

Wright, the Tarrant County Tax Assessor-Collector before he ran for office, won the election by 8 points over Democrat Jana Lynne Sanchez in 2018. Before serving in Tarrant County, Wright worked as Barton's chief of staff.

This year, Wright was opposed by Daniel, a lawyer, and Libertarian Melanie Black.

The 6th Congressional District covers southeast parts of Tarrant County and most of Ellis County.

With 77% of precincts reporting, the incumbent had earned 64% of the vote to Democrat Lisa Welch's 33%.

Granger's toughest challenge in recent years came not from a Democrat on the left, but in the 2020 primary from the right.

Granger is the ranking member on the House Appropriations Committee, but suffered a setback in February, when the U.S. Army Corp of Engineers’ 2020 work plan budget did not include any new funds for Fort Worth's Panther Island project -- a plan to reroute the Trinity River near downtown to form an island.

Welch and Libertarian Trey Holcomb opposed Granger, who was overwhelmingly re-elected with 64% of the vote in 2018.

The 12th Congressional District includes a large swath of west Fort Worth, Parker County and parts of Wise County, including Decatur.

Flores is one of six Texas GOP congressmen retiring after this cycle.

Sessions represented the 32nd district for 16 years, until he lost to Rep. Colin Allred (D-Dallas) two years ago.

Kennedy, a software engineer, ran on the Democratic ticket and Ted Brown ran for the Libertarian Party.

Flores won the district, which includes part of McLennan and Brazos counties, by 25 points or more in each of the last two elections. Waco and Bryan-College Station both fall within the district's boundaries.

Republican Rep. Chip Roy of Texas is returning to Congress after staving off a high-profile challenge from Democrat Wendy Davis, one of her party's biggest stars in the state.

Roy's victory was a blow to Democrats who spent heavily to flip a district that stretches from San Antonio into liberal Austin. They also had a big name in Davis, who catapulted to fame in 2013 after staging a 13-hour filibuster that temporarily blocked an anti-abortion bill in the Texas Legislature. She ran for governor but badly lost to Republican Greg Abbott in 2014.

Roy is a former aide to Sen. Ted Cruz who quickly established himself as one of Congress' most conservative new members in his first term.

U.S. Rep. Michael Burgess (R-Denton), who has had the seat since 2003, won re-election over Democratic challenger Carol H. Iannuzzi by 23 points Tuesday night.

Prior to being elected to public office, Burgess practiced medicine for nearly 30 years, according to his official government website, and is the most senior medical doctor in the House.

Iannuzzi is a retired contracts negotiator with HP Enterprise Services, according to her campaign website, Iannuzzi has previously served as Democratic precinct chair in Lewisville.

The 26th district covers most of Denton County and part of northern Tarrant County.

The Associated Press called the race for her with 67% of precincts reporting and a 60-point lead over her Republican challenger Tre Pennie.

Johnson served Dallas residents as a state representative and state senator before her election to the House of Representatives. She garnered 91% of the vote in 2018.

The 30th district covers much of southern Dallas County, including downtown Dallas and Dallas Love Field.

Two years ago, Veasey was elected to a fourth term in the U.S. House of Representatives with 76% of the vote in 2018.

Previously a member of the Texas House of Representatives, Veasey was first elected to Congress in 2012.

The district stretches along Interstate 30 from West Dallas to East Fort Worth.