It was a violent Independence Day with more than two dozen people hit by gunfire in Dallas and Fort Worth, five people were killed on July 4.

Fourteen people were shot in five incidents in Dallas, four people are dead.

At around 11:15 p.m. Sunday, police were called to a shooting in the 8200 block of Towns Street where according to Dallas police, five people were shot near Hamilton Park where a group was celebrating the holiday. Three people died according to police. They were identified Tuesday as 17-year-old Mi'quaris Alexander, 19-year-old Hassan Blazer and 22-year-old Alvin Ray Murray II.

Police said Monday an arrest was made, but they did not release the person's name or the charges against them.

Police were also called to a shooting in the 3700 block of Dixon Avenue in Southeast Dallas at around 11:50 p.m. According to police, there was a big crowd gathered at a park near the Larry Johnson Recreation Center where some people were shooting off fireworks. Police say after shots rang out, at least five shooting victims were taken to local hospitals. Police are still gathering information on the circumstances surrounding the shooting. 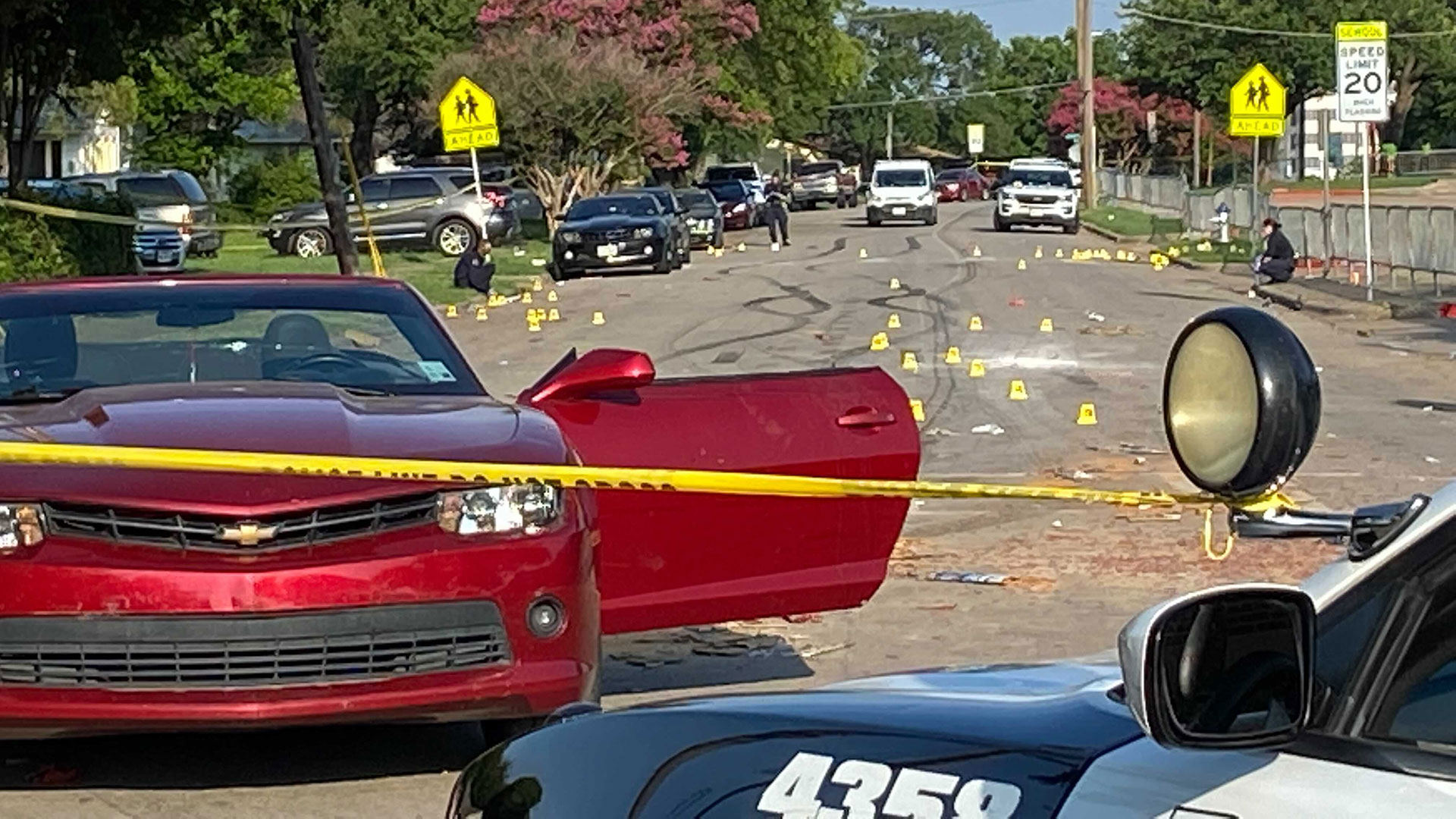 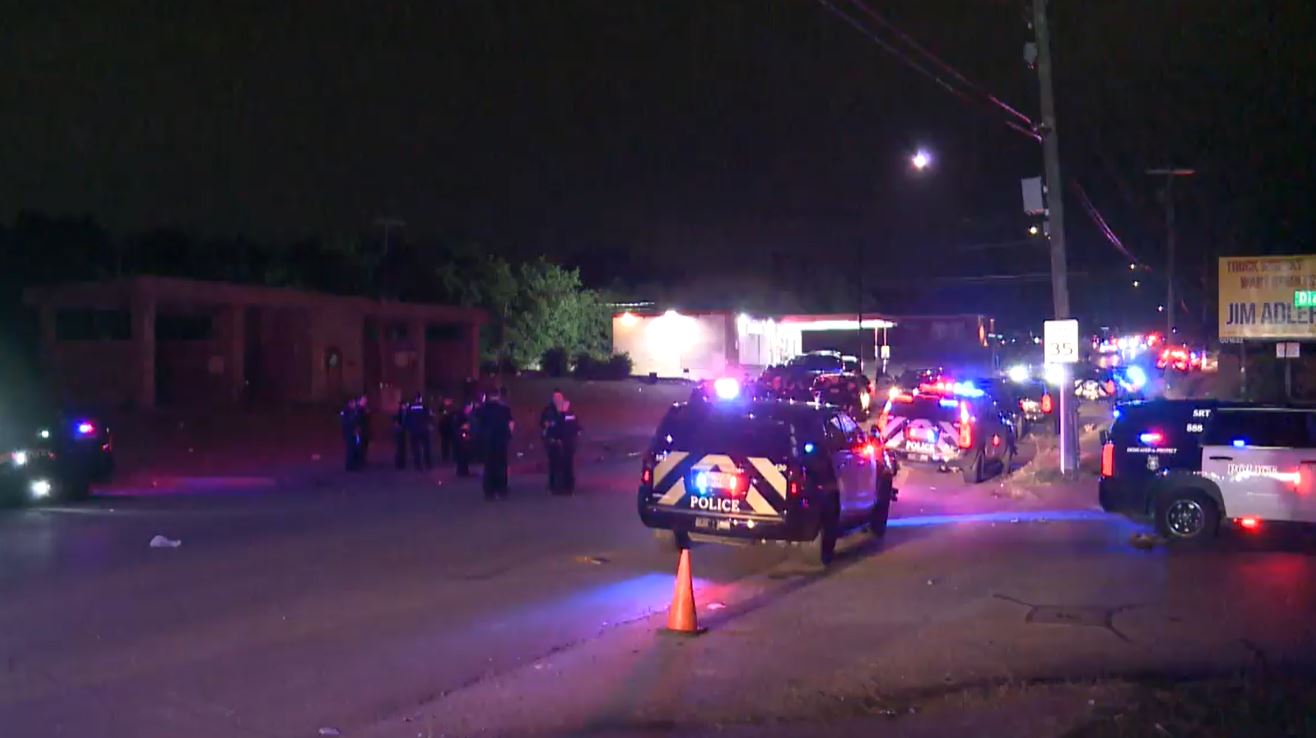 8 Wounded, Girl Hit By Car After Shootout in Fort Worth: Police

Just before 8 p.m. Sunday, Dallas police said they were called to a shooting in the 2900 block of Gould Street. Police said Ronnie Joseph Berry, 61, was shot several times in the street. Dallas Fire-Rescue transported him to a local hospital where he died. A $5,000 Crime Stoppers reward is being offered for information leading to an arrest and indictment.

Just before 10 a.m. Sunday Dallas police were called to a shooting in the 2900 block of Casey Street. Police said officers found a 12-year-old and 14-year-old shot. They told police they were shot at while walking through a vacant lot. Police said they suffered injuries that were not life-threatening. The gunman remains on the run.

Dallas police said their first Independence Day call came at 12:31 a.m. Officers were called to a shooting at the Ridgecrest Apartments in the 5500 block of Plumgrove Lane. Police said someone was causing a disturbance in the courtyard at the location and after a verbal dispute, someone retrieved a handgun that was used to shoot the person in the courtyard multiple times. The shooting victim was taken to the hospital in critical condition, the suspect, whose identity is known to police, ran from the scene.

At 10:37 p.m. Sunday, Dallas police responded to a shooting at 3011 Park Row Avenue. A 43-year-old woman and a 19-year-old man were shot while attending a gathering at the location. Both victims were transported to an area hospital and are being treated for their injuries. Crimestoppers will pay up to $5,000 for information called into Crimestoppers which leads to the arrest and indictment for this or other felony crimes

Michael Mata, the president of the Dallas Police Association said the violence started to increase on Sunday after a relatively calm Friday and Saturday.

"Obviously we had a lot of 911 calls for fireworks and gunshots, but that is the norm, but no major violent incidents until last night late," Mata said. "These crimes, these murders do not happen in a vacuum, people in the community where these incidents happened, they know what happened, they know who that shooter is, they have to help the Dallas Police Department solve these crimes."

One resident in South Dallas described the night of the Fourth of July as a "war zone" with fireworks, which are illegal in Dallas, and random gunfire erupting all around her home.

"It was like we were under siege, it was literally like a war zone, I am not overdramatizing," said Eva Jones, president of the homeowner's association for Queen City. "I watched cars go down the street and fire is coming out of the windows of the vehicles because they were shooting guns as well."

She said it would, "be through the grace of God," that no one's house was burned down or anyone injured with what she witnessed on Sunday.

Jones said it was the worst she's seen in 40 years of living on the corner.

She said she was primarily frustrated that after calling 911 for police around nine times that she didn't see any squad cars in her neighborhood.

"We will bring every tool to bear. Both conventional and nonconventional. We will have officers vigilant, but we will also be working with businesses and other entities throughout our city," said Garcia.

Garcia said last week that the weekend would be a challenge, alluding to the department's demand and the well-known fact that the department is short-staffed.

It was a violent Independence Day with 29 people hit by gunfire in Dallas and Fort Worth. Five people were killed on July 4.

Mata said there were different task forces and extra patrols out, but said officers became especially tied up during the violent events. For example, at least 20 officers were at one of the shootings that had a large crime scene.

Mata said he usually takes less than eight calls a day as a supervisor, and that more than doubled on Sunday.

"Last night I almost answered 20 calls myself, so I was just one of many out there, so again very unfortunate that this citizen did not get the service that she deserved, but there was plenty of that going around across the city," Mata said.

Jones said she wanted more police presence on her street and said beyond Fourth of July, the issues of random gunfire are an issue in their neighborhood.

Reverend Horace Bradshaw is a longtime mentor and activist in Dallas, and a resident of South Oak Cliff. He had a message for those responsible for the weekend violence.

"That’s way too many. If it was one it would be too many. We’re supposed to celebrate on the Fourth of July, not kill one another," Bradshaw said. "I love them, but if you’re my brother and you’re out there killing somebody I need you off the streets."

It was a violent holiday weekend in Dallas, as police investigate at least two major incidents late Sunday night.

Multiple Shootings in Fort Worth

Thirteen people were shot in three incidents in Fort Worth on July 4, one person died.

Fort Worth Police say South Division units were called to a shooting in the 5900 block of Village Course Circle at 11:17 p.m. Sunday. Police said when officers arrived they found two people hit by gunfire. Investigators said shots were fired at a vehicle with five people inside as they were driving near Ramey Avenue. Both suffered injuries that were not life-threatening. The shooter is not in custody.

One person is dead and two others were injured in a shooting just after 8 p.m. Sunday night. Fort Worth police said it happened around 8 p.m. in the 3300 block of Galemeadow Drive. Police said officers arrived to find three gunshot victims. Two were transported to a local hospital in serious but stable condition, another victim was pronounced dead at the hospital. Police said it appeared the shooting stemmed from a domestic dispute, possibly involving a custody battle.

Eight people were shot and a child was hit by a vehicle Sunday morning after gunfire broke out following an argument at 1:30 a.m. Sunday, Fort Worth police said. An officer near the 3400 block of Horne Street heard gunshots according to police, when additional officers arrived they found eight people who had been shot near the car wash. A girl also suffered minor injuries after being struck by a vehicle trying to leave the area, police said. Shooting victims were taken to several hospitals, police said no arrests have been made in connection with the shooting.