Waves of Heavy Rain Today Adding to Risk of Flooding

Overnight storms brought areas of heavy rain and some gusty winds to North Texas early Tuesday morning, and more are on the way.

With additional waves of rain the next several days, rainfall totals of 3 to 8 inches are possible this week. Tuesday's early-morning storms will further increase the risk of flooding, which will likely be the more widespread issue for several days.

Over the weekend the National Weather Service issued a Flash Flood Watch that will remain in effect until Wednesday morning for much of the area and a River Flood Warning has also been issued for several North Texas counties.

Flooding may occur in urban and poor drainage areas. Heavy rainfall may also cause flooding of creeks, streams, and rivers.

Parts of western and northern Dallas County on Sunday received downpours of 4 to 5 inches in a matter of hours.

That resulted in a number of high water rescues, mainly along Highway 75 from NorthPark Center to the High Five and into east Plano.

A Tornado Warning was issued briefly for northern Dallas County Sunday as radar indicated some rotation north of NorthPark Center. That tornado warning was canceled around 2:30 p.m., 15 minutes before it was set to expire.

Survey crews with the National Weather Service confirmed Monday afternoon that there were two separate tornadoes in Dallas County Sunday, an EF-0 in University Park and an EF-1 that hit in North Dallas near Northaven Road. 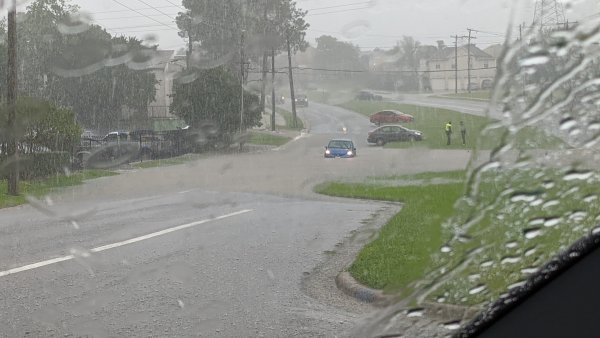 The National Weather Service also issued tornado warnings Sunday for Hill and Ellis counties. Three EF-U tornadoes were confirmed in Ellis County by survey crews on Monday. Though a funnel was spotted in northeastern Hill County Sunday, the NWS did not confirm a tornado in that area.

Multiple rounds of showers and thunderstorms are expected throughout the upcoming week as an upper level low will establish itself to the west, allowing low-level moisture to spread northward.

There will be the potential for heavy rain with amounts of 3-6 inches possible, with isolated higher amounts near 8-10 inches.

Be sure to stay weather aware and have multiple ways to receive warnings.