A sudden Tornado Warning in Dallas on Sunday afternoon came as a surprise to many -- especially to property owners in Preston Hollow.

To people who live and work on Northaven Road, Sunday reminded them of the October 2019 EF-3 tornado that ripped through Dallas and plowed northeast to Richardson.

Sunday afternoon Hart and her husband took shelter in a bathroom when tornado sirens started to blare.

"I didn't know there was any severe weather was supposed to happen," Hart said. "I mean 30 seconds before it hit, we shut the sliding door and we put our feet against it and it was the same thing. My ears started popping again and it was this loud, 'whoosh' noise but it was faster this time."

She said she happened to be on the phone with her daughter, who was the same person she was talking to during the 2019 tornado.

Fortunately, Hart and her husband were not injured either time. When they walked out of the bathroom Sunday, they found debris everywhere and part of the roof missing.

"I'm in shock. I can't, I really can't believe it," she said. "I don't know if it's a tornado or a microburst or straight-line winds, I have no idea, but it doesn't matter the destructions the same."

It took the family a year to rebuild their home after the 2019 storm. They moved in again in September 2020, but this time they had just recently sold the home.

"We just closed on this house and sold it last Friday, the Friday before, to new buyers from out of town, and I almost have survivor's guilt," Hart said. "I feel so bad about it, you know, I'm going to get to leave the house this time, but I'm losing my possessions."

She said she and her husband closed on a new home in Flower Mound and won't be moving there until a couple of weeks from now.

"I'm going to have a tornado shelter, put in as soon as I possibly can," Hart said.

In the meantime family and friends helped them cover up their current items before the next round of rain moves through.

Across the street from the Hart family's home is North Haven Gardens, a nursery that was leveled during the 2019 tornado.

On Sunday, owner Aaron Pinkus said he heard the sirens from his home, but didn't think it could happen again in the same spot. Moments later, he began to receive texts and pictures from employees inside the store.

"It looks like the tornado came through and busted the doors open and then somehow the vortex got inside the building, and it took all the inventory off the shelves and came through here a little bit took down our awning up there, and a bunch of plants over there," Pinkus said. "We've been out here cleaning for about four hours now and I think we got the bulk of it cleaned up." 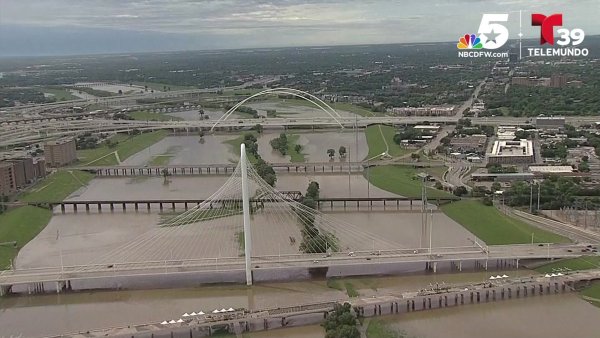 The damage doesn't compare to what they experienced in 2019, but there was still a mess to clean up.

"By the time I got here, (the employees) already started cleaning up. Everyone's all smiles and it's amazing how it could happen a second time and the attitude is still, 'Let's rebuild and move forward,'" he said. "So that rubs off on my wife and I and we're optimistic all smiles basically and I think we'll be open, maybe not tomorrow afternoon but Tuesday for sure."

They're also in the process of getting ready to open a restaurant along with a boutique on the property. Neither of those buildings was impacted.