“As soon as they come back in the state of Texas, they will be arrested, they will be cabined inside the Texas Capitol until they get their job done,” Republican Gov. Greg Abbott says

Democrats in the Texas Legislature bolted Monday for Washington, and said they were ready to remain there for weeks in a second revolt against a GOP overhaul of election laws, forcing a dramatic new showdown over voting rights in America.

Private planes carrying more than 50 Democrats left Austin for Dulles International Airport midafternoon, skipping town just days before the Texas House of Representatives was expected to give early approval to sweeping new voting laws in a special legislative session. The numbers meant the House would not have enough lawmakers in attendance to conduct business and could not, at least for now, vote on the bill.

The cross-country exodus was the second time that Democratic lawmakers have staged a walkout on the voting overhaul, a measure of their fierce opposition to proposals they say will make it harder for young people, people of color and people with disabilities to vote. But like last month’s effort, there remains no clear path for Democrats to permanently block the voting measures, or a list of other contentious GOP-backed proposals up for debate.

On Monday afternoon, a Democratic lawmaker texted a photo (above) to NBC 5 reporter Scott Gordon saying Texas Democrats left the capitol and boarded a bus bound for Austin-Bergstrom International Airport.

Hours after they took off, Abbott told an Austin television station he would simply keep calling special sessions through next year if necessary, and raised the possibility of Democrats facing arrest upon returning home.

“As soon as they come back in the state of Texas, they will be arrested, they will be cabined inside the Texas Capitol until they get their job done,” Abbott said.

As they arrived in Washington Monday evening, the lawmakers said they would not be swayed.

"Texas Democrats are once again making history. Right now, Texas Democratic lawmakers are walking out to break quorum in defense of voting rights in Texas and block further consideration of anti-voter bills HB 3 and SB 1 -- a core subject of an irregular special session called by Republican Gov. Greg Abbott," Texas Democrats said in a statement.

Democrats’ decision to hole up in Washington is aimed at ratcheting up pressure on President Joe Biden and Congress to act on voting at the federal level. Biden is set to deliver a major address on the issue Tuesday in Philadelphia, after facing growing criticism for taking what some on the left call too passive a role in the fight.

“This is a now-or-never for our democracy. We are holding the line in Texas,” said Democratic state Rep. Trey Martinez Fischer. “We’ve left our jobs, we’ve left our families, we’ve left our homes. Because there is nothing more important than voting rights in America.”

The measures are part of the GOP’s rush to enact new voting restrictions in response to former President Donald Trump’s false claims that the 2020 election was stolen. More than a dozen states this year have already passed tougher election laws — but only in Texas have Democrats put up this kind of fight.

In an interview with MSNBC, Crockett said she decided to leave the special session after this weekend's marathon public hearings failed to stop Republicans from pushing forward with a vote.

"The House Democrats here in Texas decided enough was enough," Crockett said. "You saw people come from all over this state at a moment's notice, for the purpose of trying to educate, you know, the committees on their experiences with voting in this state. And, sadly enough, you know, they may as well have stayed at home, because no one was listening to them."

The state has a history of attention-getting political tactics. Texas Democrats, shut out of power in the state Capitol for decades, last fled the state in 2003 to thwart a redistricting plan. They ultimately lost that fight.

"Back in 2003 the Democrats did this twice to fight a re-districting bill that the Republicans were pushing," said SMU political science professor Cal Jillson. "And, ultimately, the Democrats lost. The Republicans got their bill passed. That’s what will happen this time, but it increases the visibility of this fight and increases people’s sense of the importance of this fight."

“We are determined to kill this bill,” said state Rep. Chris Turner, who said he and his colleagues were prepared to run out the clock on a special session that ends early next month.

Turner noted this time the state lawmakers had dual goals. They called on Congress to pass the Democrat-backed, federal voting rights law prior to when they go on August recess, which is around the same time Texas’ special session will end. He said the group would meet with Democrats across Washington, but a White House official said there are no current plans for a White House visit.

Turner said in order to pass the voting rights expansion law, the Senate may have to modify its procedural rules, but added, “I don’t really care how they do it.”

Back in Texas, Republican House Speaker Dade Phelan promised to use “every available resource” to secure a quorum. He did not elaborate, but some House Republicans signaled they would take action when the chamber reconvenes Tuesday. When Democrats fled the state two decades ago state troopers were deployed to bring them back.

In an interview with Austin television station KVUE, Abbott said he was prepared to keep calling special sessions through next year’s election.

“If these people want to be hanging out, wherever they’re hanging out on this taxpayer-paid junket, they’re going to have to be prepared to do it for well over a year, he said.

But it was not immediately clear who was footing the bill for the Democrats’ trip. Martinez Fischer said he would use his own campaign funds to pay for hotels for House members, but declined to comment on who funded the chartered flights. 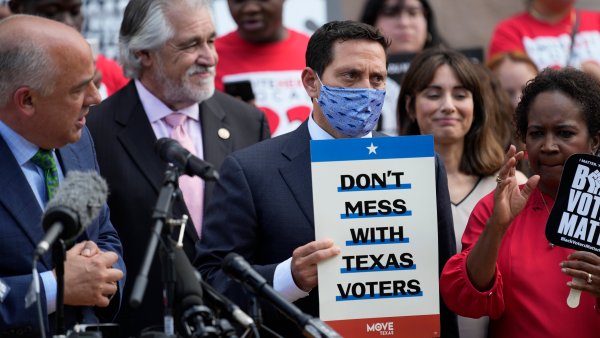 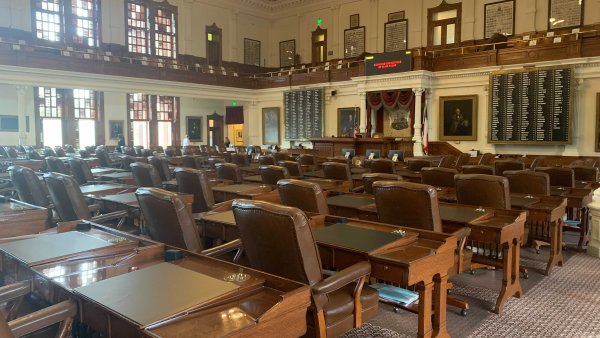 Speaking in the airport parking lot, he blasted the governor for likening the group, which includes many Black and Latino lawmakers, to “animal or property, to say he will corral us and he will cabin us in the capital to get this agenda.” After addressing the media, Black lawmakers led the group in singing ”We Shall Overcome.”

Abbott also gave lawmakers a lengthy to-do list this summer, heavy on hot-button conservative issues including restrictions over how race is taught in schools and banning transgender athletes from playing in girls’ sports.

The decision to flee carries risks and no guarantee of victory in the long run.

Abbott, who is up for reelection in 2022 and has demanded new election laws in Texas, could keep calling 30-day special sessions until a bill is passed. He also punished Democrats after their May walkout by vetoing paychecks for roughly 2,000 Capitol employees, which will begin taking effect in September unless the Legislature is in session to restore the funding. 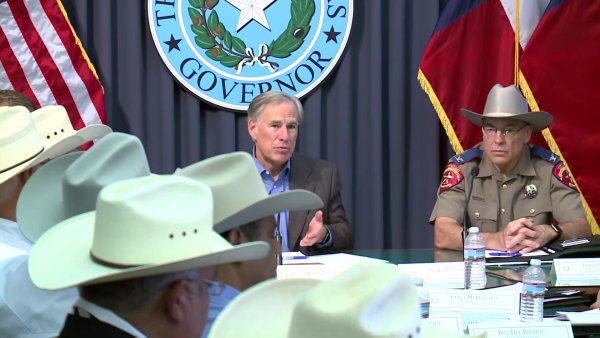 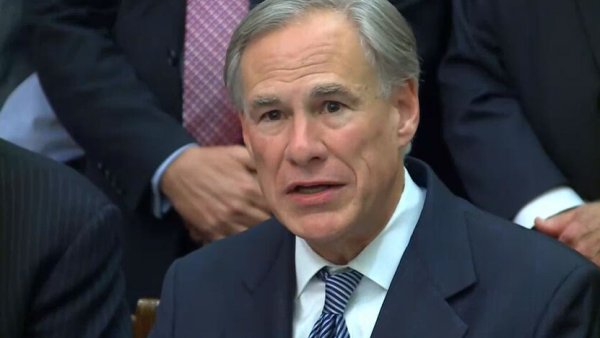 Staying away for an extended time could also carry repercussions in next year’s midterm elections, although many Texas Democrats are already expecting a difficult cycle in 2022, particularly with Republicans set to begin drawing new voting maps this fall that could cement their majorities.

Adding to the fresh anger, a Houston man who gained attention last year after waiting more than six hours to cast a ballot was arrested on illegal voting charges, and put in jail one day before the special session began Thursday. Attorneys for Hervis Rogers say the 62-year-old did not know that his being on parole for a felony burglary conviction meant he wasn't allowed to vote.

Vice President Kamala Harris applauded Texas Democrats for their “courage and commitment” before they boarded the flight. Back in Texas, Republican Lt. Gov. Dan Patrick signaled that he would still try to pass a voting bill as early as Tuesday in the Senate. It was unclear whether Democrats in that chamber would continue showing up.

Democrats in the Texas Legislature are leaving the state for Washington, D.C., in a second revolt against a GOP overhaul of election laws, creating another dramatic showdown over voting rights in America.

How Republicans respond next will be a major test of their resolve.

Republican House Speaker Dade Phelan told Austin television station KXAN last week that "all options are on the table" if Democrats revolt a second time but did not elaborate. When Democrats last fled the state two decades ago -- in an ultimately failed attempt to stop new GOP-drawn voting maps -- state troopers were deployed to try bringing them back.

State Sen. Bryan Hughes, the author of both GOP attempts to pass election changes in Texas, said over the weekend that the legislation had become "bitterly partisan." He defended the new version, which leaves out contentious attempts to ban Sunday morning early voting and make it easier for judges to overturn an election.

"Your ballot is sacrosanct," Hughes said while introducing the bill Saturday. "Everything else in the election process should be bathed in sunshine."

Biden and his team are stressing ongoing legal efforts to safeguard voting rights. They've also promised a major legislative push after Senate Republicans blocked a sweeping election overhaul last month. The president has told reporters he plans on "speaking extensively" on voting rights and that he would be "going on the road on this issue."

Texas Republicans, expectedly, have been critical of the move by the Democrats to deny a legislative quorum. The following is a collection of statements from Republican leaders on the Democrats' departure.

“A number of House Democrats stated their caucus intends to break quorum in an attempt to stall election integrity legislation. These actions put at risk state funding that will deny thousands of hard-working staff members and their families a paycheck, health benefits, and retirement investment so that legislators who broke quorum can flee to Washington D.C. in private jets. The Texas House will use every available resource under the Texas Constitution and the unanimously-passed House Rules to secure a quorum to meaningfully debate and consider election integrity, bail reform, benefits for retired teachers, Child Protective Services reform, Article X funding, and the other important measures Gov. Abbott placed on the special session agenda. The special session clock is ticking -- I expect all Members to be present in our Capitol in order to immediately get to work on these issues.”

“This immature behavior by House Democrats is not only childish; it is a disgrace to democracy,” Attorney General Paxton said. “Their capricious act will not thwart our leadership’s efforts for stronger election integrity, bail reform, retired teacher benefits, and Child Protective Services reform, among other important agenda items. House Democrats have hurt their constituents and demonstrated that when they’re faced with a problem, they run away - literally. It’s shameful and they have failed as elected officials.”

“By pulling another petty partisan stunt and fleeing the state, Texas Democrats are prioritizing a federal takeover of state and local elections over the needs of their own constituents. It’s hard to say who will regret this decision more, the Texas Democrats who flee, or Joe Biden and Kamala Harris who continue to support it.”