In a confession to detectives, a man tells police he killed at least five people and believed he was being called to commit sacrifices

A man arrested Monday night and charged in connection with the deaths of three people whose dismembered bodies were found in a burning dumpster last week has been tied to two other slayings and has confessed to the killings saying he was committing biblical sacrifice.

Jason Alan Thornburg, 41, was booked into the Tarrant County Jail at about 11:30 p.m. Monday on a charge of capital murder of multiple persons. He is currently being held in the jail on a $1 million bond. It's not clear if he's obtained an attorney.

Last Wednesday, Fort Worth firefighters were called to a dumpster fire on the city's West Side. After putting out the fire, firefighters made a horrible discovery when they spotted the burned, dismembered remains of three people inside the trash bin.

One of the victims had several distinctive tattoos and was identified as 42-year-old David Lueras, a man police said had a long criminal record and had ties to Dallas County and northeast Tarrant County.

After initially saying the other two victims found in the dumpster were an unknown adult female and a child, police said during a news conference Tuesday afternoon that they were both adult women and that they may be close to confirming their identities.

Fort Worth police said Tuesday that video surveillance near the dumpster showed the person they believe dumped the bodies was driving a 2005-2010 Jeep Grand Cherokee. Police said there are roughly 7,000 of those vehicles in North Texas, but that a detective noticed specific chrome rims and accents on one that looked similar to the one seen in the video near the dumpster. That SUV, a 2008 Grand Cherokee, was owned by Thornburg.

Detectives said Tuesday that Thornburg, who worked as an electrician, was a person of interest in the suspicious death of his roommate, 61-year-old Mark Jewell, whose body was found inside their burning home on Valentine Street on May 21. The medical examiner's office was not able to determine the man's cause of death due to the explosion in the home. Though he was investigated at the time, officials said they didn't have probable cause to arrest him.

Using GPS data, homicide detectives located Thornburg's SUV at a residence in Arlington and learned he'd recently been staying at the Mid City Inn since June 28.

Police said Tuesday homicide detectives obtained surveillance video from the motel that showed a guest exiting a room carrying large bins police believed contained the dismembered remains of the three victims. Police said the motel guest made several trips from the room to the car and from the motel to the dumpster.

Police said the time frame from when the bins were loaded into the SUV in Euless to when they were dumped in the dumpster in West Fort Worth lines up. 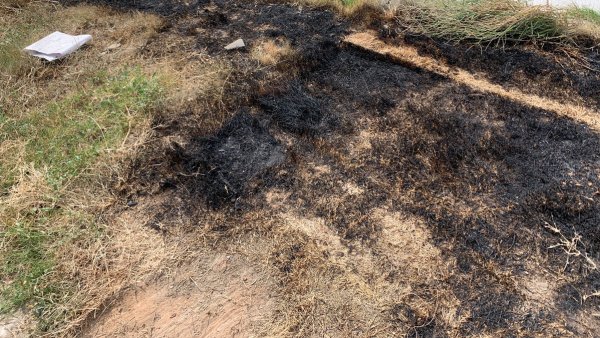 At 5:30 p.m. Monday, detectives approached Thornburg as he left the residence in Arlington and asked if he'd consent to a voluntary interview. He agreed, and during that interview, police said, Thornburg admitted his involvement in the deaths of the people found in the dumpster as well as the man who was found after the fire on Valentine Street.

Police said Tuesday Thornburg shared grisly details of the crimes that would be known only to someone involved in the deaths. Authorities added that the killings in the motel room were apparently done over several days and that the remains were stored in plastic bags until they were transferred to the containers.

According to his arrest warrant affidavit, in his confession, Thornburg said he had an in-depth knowledge of the Bible and believed he was being called to commit sacrifices.

In the arrest document, he also reportedly admitted to killing a girlfriend in Arizona. Fort Worth said they were reaching out to authorities there but did not reveal any further details about that slaying.

While it's not clear how Lueras and Thornburg knew each other, police said Tuesday that the men shared the same room at the Mid City Inn for several days, presumably until Lueras was killed.

Fort Worth police served a search warrant at the motel Tuesday morning. Police said they recovered a knife from Thornburg's motel room.

Officials said Thornburg doesn't have a particularly violent criminal history. He was convicted in the city of Rhome in 2018 on a charge of evading arrest, according to the Texas Department of Public Safety, and was paroled in June 2020. Wise County District Attorney James Stainton said Rhome police tried to pull Thornburg over on U.S. Highway 287 for a broken taillight and he ran from officers. He was sentenced to two years in prison based on prior criminal history, Stainton said.

Court records in Arizona show Thornburg was arrested for carjacking a woman who was stopped at a red light in Tucson in May 2014.

After his arrest, he claimed he was under the influence of alcohol, was going through a divorce, and had argued with his girlfriend, according to the documents.

“I was emotional, not in my right mind,” he said.

He said he was raised by his mother and grandmother after his parents divorced when he was 1-year-old and moved into a foster home at age 10. He dropped out of high school but later earned his GED, he said.

Thornburg was sentenced to nine months in prison with 98 days credit for the time he already served.

At the time, court records show he had already been arrested on three misdemeanor charges and one drug-related felony.

Though records at that time didn't indicate any reported mental health problems, licensed professional counselor Anna Arwine says in serial cases like this one, it's not unusual to see a history of mental illness.

"As a therapist, somebody had to see something, somewhere down the road had to have thought, that's just not normal behavior. Or that statement they made, that was a little off. That's the first thing that comes to my mind," said Arwine. "Is there really mental health issues at play in this case? And if so, then how does that impact the case and what can we learn from this?"

A man arrested Monday night and charged in connection with the deaths of three people whose dismembered bodies were found in a burning dumpster last week has been tied to two other slayings and has confessed to the killings saying he was committing biblical sacrifice. Scott Gordon reports.