One of the biggest artists in country music now has a place of honor in Fort Worth.

Singer/songwriter Miranda Lambert was inducted into the National Cowgirl Museum and Hall of Fame on Tuesday. The annual event honors strong women of the west -- past and present.

Lambert was one of five women honored at the ceremony at Dickies Arena. The singer, 37, told the crowd of 1,300 she'd been nervous about the award all day and joked she would feel better if she had her guitar. Even so, Lambert clearly understood the significance of the moment.

"And the biggest thing to me is the common theme of women celebrating women. That's the most beautiful thing I could ever ask for. So thank you so much for letting me in your club, girls. I love it!" she said in her speech. 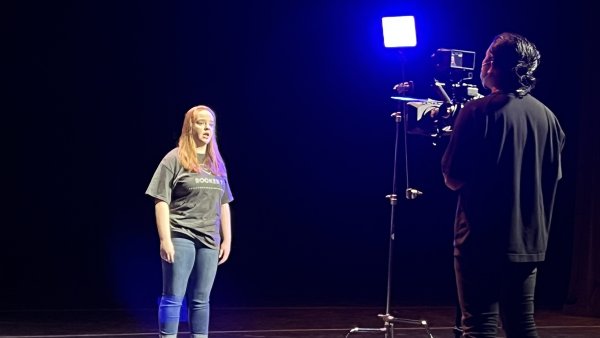 "It's very humbling and definitely in the top five of things that have ever happened to me. So, I'm very, very thankful," Lambert told NBC 5 in an exclusive conversation following the ceremony.

NBC 5’s Deborah Ferguson exclusively spoke with country music star Miranda Lambert after she was inducted into the National Cowgirl Museum and Hall of Fame Tuesday in Fort Worth.

We chatted in front of her new display at the Cowgirl Hall of Fame. The East Texas native now has a permanent place in the only museum of its kind in the world. Visitors can walk by it and see her trademark pink guitar and a picture of rescue dogs that have been part of her life since her days growing up on a farm in Lindale, about two hours east of Fort Worth.

"I would love for people to take away that I guess, I had to learn being here, too, that I'm not a cowgirl. I don't. I just learned to ride at 30 years old and I'm still working on it, you know. But I think when reading all about it and realizing what this museum means and this Hall of Fame embodies is, there's cowgirls of all kinds. And it's really about grit, determination, drive," she said.

Those qualities put Lambert on a 20-year career that started at the age of 17 singing in bars around Texas to now, the most decorated artist in the history of the Academy of Country Music Awards. She has won 35 ACMs, nine consecutive for Female Artist of the Year; three Grammy Awards, six American Country Awards, 11 Country Music Television Awards, and 14 Country Music Association Awards.

She's come through with hit after hit singing songs about life.

"I feel like Loretta Lynn said it best when she said, 'You gotta go live a life so you have something to write about,' she said. "I think I've just sort of done that even when I was young and didn't have a lot of life behind me. I just gathered from other people's stories and experiences, and I still do that today. Every couple of years I make a record and it's like, here's a picture of what I've been going through the last two years."

Earlier this month, Lambert and the trio Pistol Annies released their first-ever Christmas album, Hell of a Holiday. And, a week before that, she dropped the new single 'If I Was a Cowboy.'

"I love 'If I Was Cowboy' 'cuz I got to use some of my favorite western slang, and I feel like it was kind of perfect timing like the stars aligned. Because the Cowgirl Hall of Fame being now and the single just launched. I don't know, I feel like maybe this next phase musically for me and generally in life is using a little bit more of that cowgirl mentality of chasing things harder. So I feel like this sets me up for a whole new, for the next decade. I don't even know what that's gonna bring but I'm excited about it," she said.

Lambert also talked about feeling inspired by life, love and her inclusion in a sisterhood of almost 250 women who've been inducted into the Cowgirl Hall of Fame since the '70s.

"This really is special. And you know, what it does for me is like. It reminds you of all the work you've done, number one. But it also like, lit a whole new fire. 'cuz I felt like watching all these amazing women and what they've accomplished, it just lit a whole new fire of like I need to be bolder and be bigger and set new goals, blaze new trails because possibilities are endless," Lambert said.

Lambert's trails have taken her into entrepreneurship and nonprofit work. She has several enterprises under her brand. She has a clothing line called Idyllwind with a new perfume of the same name, a brand of wine called Red 55 Winery, and owns The Pink Pistol boutique in her hometown. In May 2021, she became the first female artist to open her own bar, Casa Rosa, in the Lower Broadway entertainment district of Nashville, Tennessee.

Lambert and her mother, Bev Lambert, founded MuttNation Foundation in 2009 to shine a spotlight on rescue animals through adoption drives, donation drives at her concerts, grants towards shelters in every state, and special circumstance rescues. The charity has raised more than $4.5 million for the cause since its inception.