David Finfrock Works to Get Well

NBC 5’s Senior Meteorologist has been struggling to make it through his forecast segments without coughing, and often losing which caused viewers to write in and post on social media -- both concerned and upset.

"Finfrock sounds like a bad case of the flu… go to bed man." - viewer Scott Gordon via email

"It's been a while since I watched channel 5 news and David was coughing a lot back then, and he's still coughing." - Jacqlene D Clark on Facebook

The issue was getting so serious one of NBCDFW.com’s most popular stories Wednesday came from viewers looking up this 2016 video explaining his coughing fits.

NBC 5 Chief Meteorologist David Finfrock explains what exactly has been causing him to cough so frequently while on the air.

Finfrock addressed the current issue during NBC 5 News at 6 p.m. on Thursday.

“I’ve been kind of messed up, so I’m going to start with a little disclaimer here, I did go to the doctor again today - two shots, two prescriptions, an inhaler - I’m going to get over this sooner or later,” Finfrock said. “But if I cough, please excuse me.”

Finfrock says it's not the flu. He caught a cold that has settled in his chest, that along with his mountain cedar allergies is all it takes to trigger a cough when talking.

"I feel great, but talking is more of an issue, which is a problem for our viewers," Finfrock said.

Everyone at NBC 5 joins North Texas in wishing Finfrock gets well soon. 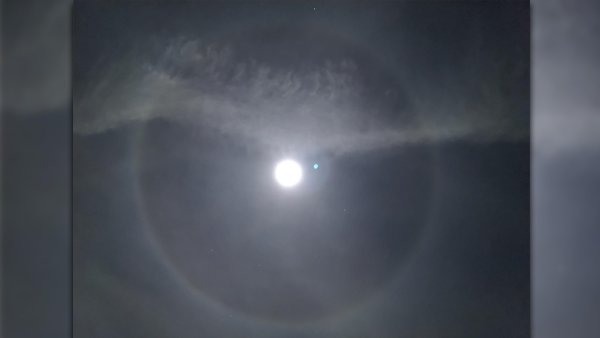 What Was That Ring Around the Moon Last Night?