Dak Prescott injured his ankle in a game Oct. 11 against the New York Giants at AT&T Stadium

Dak Prescott said he didn't need the long-anticipated return to his home field, where the devastating ankle injury happened last year, to consider himself completely recovered.

The star Dallas quarterback still might take a moment to reflect on the past 50 weeks when the Cowboys (1-1) play their home opener against Philadelphia (1-1) on Monday night, the same way Prescott has while reaching other benchmarks in his recovery.

Newy Scruggs and Jean-Jacques Taylor can't believe the reports that Cowboys offensive tackle La'el Collins attempted to bribe an NFL drug tester. Plus, who do the Cowboys go to more against the Eagles, Ezekiel Elliott or Tony Pollard?

With this seemingly final milestone, Prescott prefers to focus on the fans. They will fill 80,000-seat AT&T Stadium for the first time since the pandemic kept capacity below 50% in 2020 -- before and after the compound fracture and dislocation of Prescott's right ankle.

"Knowing that when I run out there, once again whether it's pregame or if it's in a moment within the game, to see up there and with COVID and knowing what we all went through last year, to have them all back, it will be exciting," Prescott said. "I'll take that moment, I'll be thankful for it, but then flip my mind right back again to the Eagles defense and what I have to do to win the game." 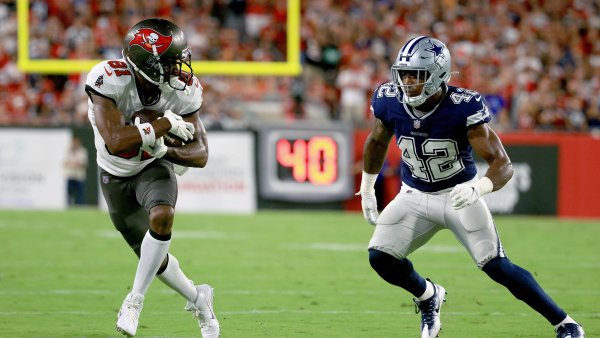 The trauma of the moment was significant enough that tight end Dalton Schultz says he doesn't remember much about what ended up being a 37-34 victory over the New York Giants last Oct. 11, when backup Andy Dalton led a drive to the winning field goal.

"Sometimes you're not able to remember stuff clearly," Schultz said. "I remember a couple plays from that game, but as a whole not much. It was emotional as hell, but it's like you have no choice. Next guy up, here we go. We've got to win a game."

The Cowboys lost their first four games without Prescott last year before improbably keeping their playoff hopes in the weak NFC East alive until the final week of the season, eventually missing the postseason at 6-10.

With the Cowboys set to host the Eagles on Monday, Fran Duffy of PhiladelphiaEagles.com breaks down the matchup. Joseph Hoyt of The Dallas Morning News previews the Battle for the Iron Skillet between TCU and SMU, and a look at crosstown high school football rivalries in Rockwall and Flower Mound.

Prescott was phenomenal in his first game back, throwing for 403 yards and three touchdowns while the Cowboys went ahead late before losing to Super Bowl champion Tampa Bay and seven-time champ Tom Brady 31-29 on a field goal in the final seconds.

The 2016 NFL Offensive Rookie of the Year's numbers were much more modest in Week 2 (237 yards, no TDs), but he led a drive that consumed the final 3:54 and ended with Greg Zuerlein's 56-yard field goal for a 20-17 victory at the Los Angeles Chargers.

"It's important anytime Dak is out there," said coach Mike McCarthy, whose first year in Dallas was marred by Prescott's injury, among others. "He's the face of our football team. Just from the offensive perspective, we're different on offense when he's in charge."

Asked if he thought playing on the home field for the first time since the injury was out of sight, out of mind for Prescott, Schultz said, "Oh yeah, 1,000%. Don't even ask him about it." 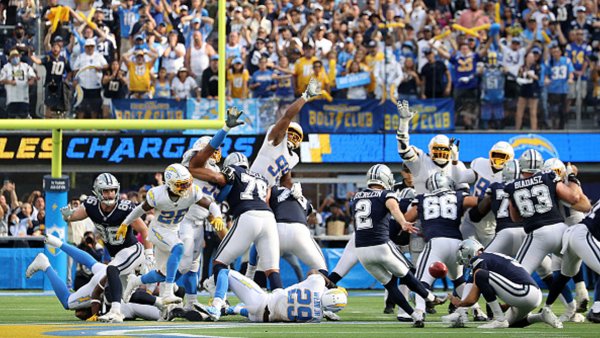 Four-time All-Pro right guard Zack Martin, who missed six games last year battling a calf issue, hadn't even thought to ask, perhaps another illustration of how Prescott is looking at this game simply as the next one, and not the first home one since he got hurt.

"I didn't even think about that," Martin said. "Again, with Dak, the most important game is the next game. I would imagine he's treating it like any other game. It's going to be rocking Monday night. We're looking forward to that."

Prescott paused for a moment before taking the field at training camp for the first practice and acknowledged something similar would be on his mind before the opener at Tampa. Now that he's played two games, it's different this time.

"All of those boxes are checked," Prescott said. "Obviously the last time I played was in front of our home crowd, but just to get out there and do it again at AT&T, I think it will be fun. As we said, I'll take a moment. I won't take any of it for granted, but all the boxes are checked and just ready to go out here and get a win."