NBC 5 Meteorologist Andy Wallace said Saturday ice and  snow will begin to melt, with road conditions improving dramatically for Sunday.  Clouds with areas of light rain and drizzle will be likely through Monday.

Low visibility and snow-covered roads are likely to blame for as many as 40 vehicles that are reported to have slid off the snow-covered highway Friday. The southbound lanes of U.S. Highway 75 were closed due to the dangerous conditions.

Missing Attachment For many drivers Friday, short trips turned into three hour journeys due to snowy, icy conditions on the High 5 in north Dallas.

The Fort Worth Police Department reported as of 7:30 p.m. officers had worked 160 minor accidents, 57 major accidents and took 25 hit and run reports since midnight. 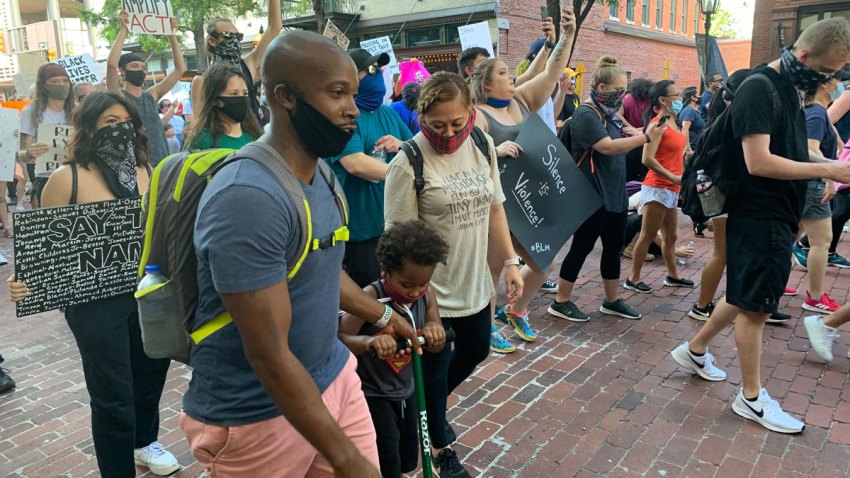 The Arlington Police Department said between the hours of  midnight and 7:45 p.m. the city had seen 34 minor accidents, 33 major accidents and 115 calls for assistance.

Due to inclement weather, more than 150 school districts have reported early closings since the snowfall began at about 8 a.m. See the latest closings and delays here.

Six Flags Over Texas announced the amusement park will not open on Saturday due to the winter weather conditions.

The Texas Rangers announced that due to weather and road conditions, the Globe Life Park box office and call center would be closed Saturday.

Dallas/Fort Worth International Airport was one of the most delayed airports in the country Friday morning.

Airport spokesman David Magaña says about 700 Saturday flights had been canceled. About 600 were cancelled Friday, forcing about 5,000 travelers to spend the night at the airport. The airport provided cots, blankets and toiletries to the passengers.

D/FW Airport advises all customers or anyone meeting flights to stay updated on the latest flight information.

Dallas Love Field reported that 12 flights had been canceled and 37 more were delayed.

Missing Attachment The winter weather brought out some Good Samaritans in North Texas as a married couple helped rescue several drivers stranded on the roads.

Meanwhile, the Texas Department of Transportation's trucks have barely had any rest after back-to-back events this week and the trucks are gearing up again to pre-treat roads.

"Brine is just one more tool in our toolbox. We still use the salt, sand, salt-based de-icers. But yes, this is really the first season we've used it extensively," said TxDOT spokesman Val Lopez. "We're pleased with the results and we'll start incorporating it more."

"We still have enough stocks on hand for a multiday event," said Lopez. "And if it goes on more than a few days, we have the availability to order more or actually to get some from are neighboring districts that aren't hit quite as hard."

Winter weather has come late this year and many wonder if it'll end soon.

"In normal years, I'd say the last bad event of the season comes in February. But this has been such an odd year. You really can't tell," said Lopez.

The first day of spring is March 20.

The City of Dallas escalated from "scouting mode" to Ice Force 1 at 10 a.m. Friday. The city had 35 sanding trucks covering bridges, overpasses and other locations critical to public safety like hospitals and fire stations. Crews will work 12-hour shifts according to Dallas City spokeswoman Sana Syed.

All garbage and recycling collection has been canceled Saturday. Dallas Animal Services opens at noon and some libraries have been closed.

The Fort Worth Transportation Authority announced Saturday that due to inclement weather all bus routes, including Molly the Trolly, are suspended until 1 p.m. Updates will be posted on The T's website.

Dallas Area Rapid Transit said Friday that all passengers should expect delays due to weather conditions. DART is operating normal schedules and monitoring conditions. Buses are subject to local road conditions and updates will be posted on DART's website.