How to Save Your Trees During Summer Heat

It's mid-June and Texas is already being hit with extreme heat, here's what you can do to help your trees in these conditions

It is only mid-way through June and Texas has already seen triple-digit heat with very little rain, with the trend expected to continue.

The anticipation of drought can cause thoughts of water shortages, increased wildfire risk and more, but what do drought conditions mean for trees?

WHAT IS A DROUGHT?

Drought is defined as a relatively long duration with substantially below-normal precipitation, typically occurring over a large area.

Texas is no stranger to drought. According to the US Drought Monitor, in 2011, more than 80% of Texas experienced exceptional drought conditions. The drought killed an estimated 300 million trees.

Experts at Texas A&M Forest Service said tree fatalities occur during drought because of the significant stress it can place on trees.

"A stress is anything that reduces the capacity of the tree to function efficiently and grow vigorously," said Karl Flocke, Texas A&M Forest Service woodland ecologist.

"Stresses can affect growth, nutrient uptake and the ability of the tree to defend itself" against things such as heat and disease, said Flocke.

Drought alone may not kill your trees but it can be the tipping domino and should raise concern. 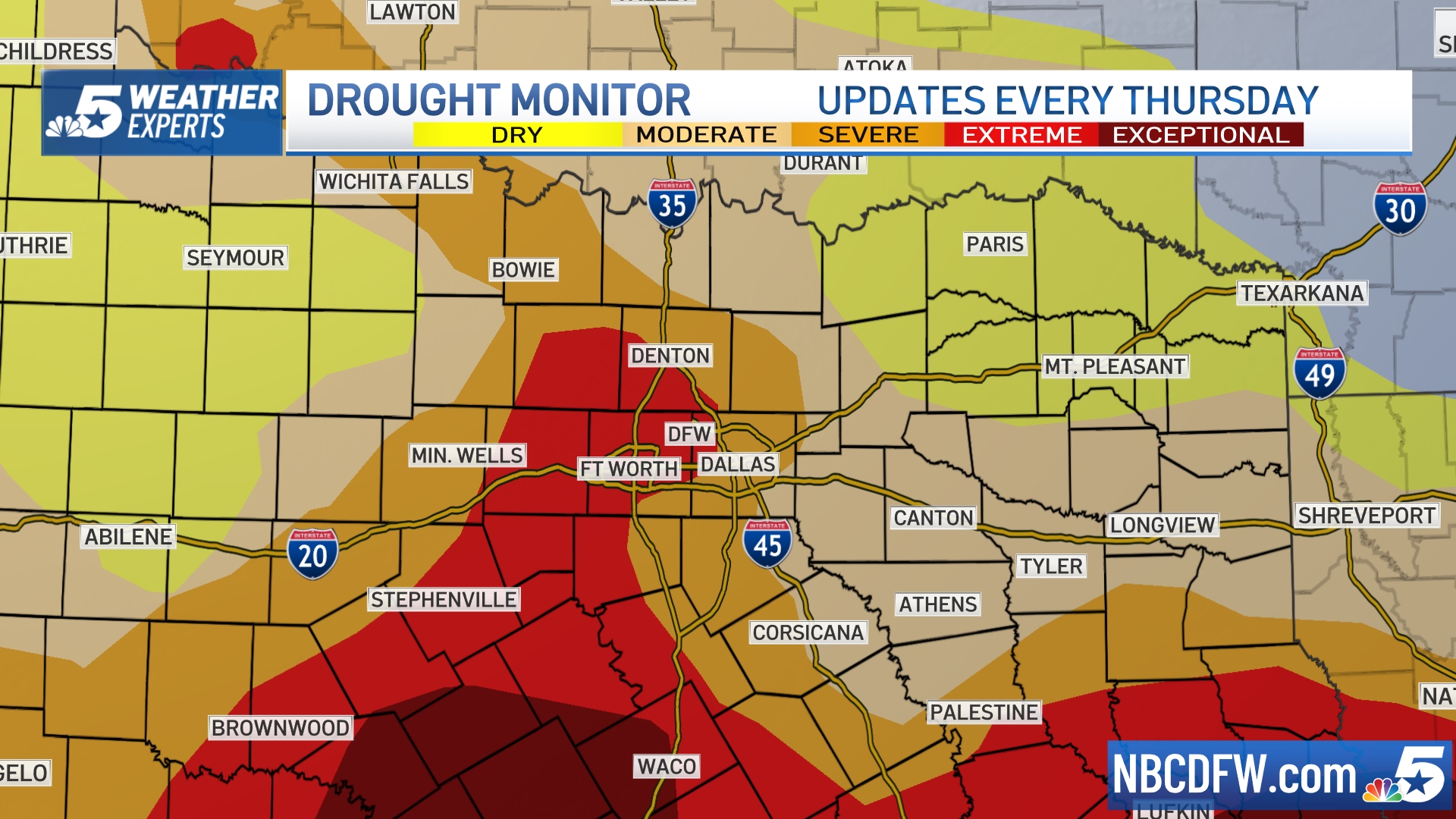 WHAT HAPPENS TO TREES DURING A DROUGHT?

During a drought, the lack of water causes trees to photosynthesize less which leads to a lack of nutrients needed to survive and grow.

Courtney Blevins, Texas A&M Forest Service urban forester said "the things to look for on your tree are leaves drooping or wilting, small or malformed leaves and the yellowing of leaves and browning of tips."

Some tree species like junipers may lose all of their leaves. However, falling leaves do not necessarily mean your tree is dead.

On smaller trees, you can use your nail to scrape smaller twigs. If there is green underneath, the tree is alive. In weeks, leaves may begin to grow again. If you are concerned your tree is dead, contact a certified arborist for a professional opinion.

HOW TO REDUCE TREE STRESS

The best way to reduce tree stress is to provide supplemental water. The amount and frequency of the water will depend on your tree and area.

"If you have established trees that are well-adapted to your location, it's very likely that they might not need supplemental water at all," Flocke said.

However, monitoring is still important for all trees. If you see signs of stress and the soil is dry, it's time to begin watering. To test soil dryness, stick a long screwdriver in the ground. If the screwdriver does not go easily six to eight inches into the soil, watering is needed.

"Start by watering the area around the canopy of the tree," said Flocke. "Not just at the base of the tree or around the edge of the dripline but water the entire area underneath the canopy until you have water pooling and running off the surface."

Watering can be done with a hose, sprinkler or bucket. A good rule of thumb for the amount of water your tree needs is two to three gallons per one-inch trunk diameter.

In terms of frequency of watering, try to mimic what a normal summer would look like, watering every 10 days to two weeks. Large, established trees may not need much watering but extreme temperatures warrant watering a couple of times a month. When watering, adhere to any water use restrictions in your area.

Flocke said to avoid watering during the heat of the day because of increased evaporation. "Either early in the morning or later in the evening is the best time to water."

Another way to reduce tree stress is by mulching. Mulch is easy and inexpensive and it conserves water, regulates soil temperature and improves soil health.

During a drought, it's imperative to avoid adding more stress to your tree. First, avoid pruning unless absolutely necessary.

"Pruning, even when you have to, is adding stress because you are wounding the tree," said Blevins. "If you're pruning out live branches or live leaf areas, you're removing food and the site where the tree's root growth hormone is developed, affecting root growth and further stressing the tree."

Blevins said the exception to pruning is a dead branch or one that is a hazard to its surroundings.

Another common mistake during a drought is using fertilizer.

"Just generally applying fertilizers without knowing if there is a deficiency is a really bad idea," said Blevins. "If there is not a nutrient deficiency then it's not going to help anything and it can actually hurt things and make the tree worse."

During summer heat and especially during drought conditions, monitor your trees for stress symptoms and add supplemental water when necessary.