Here's the latest on each of the Mavs' reported signings

After a first-round exit to the Los Angeles Clippers, the Dallas Mavericks are looking to improve their roster in free agency this summer.

Here's the latest on each of the Mavs' reported signings:

Note: All reported deals are currently verbal agreements, as free agents can not officially sign contracts until 11 a.m. Friday. 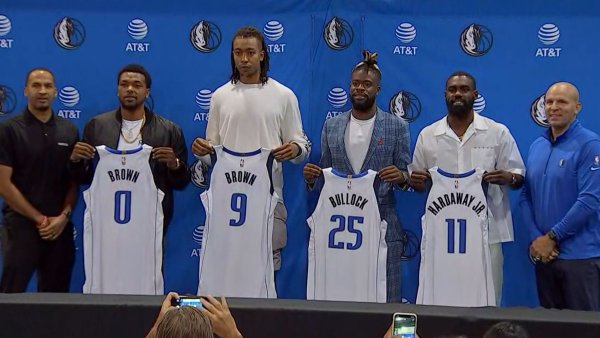 According to Townsend, resigning Hardaway was a priority as free agency began at 5 p.m. Monday afternoon.

The Mavericks agreed to terms with former New York Knicks guard Reggie Bullock, which was first reported by Marc Stein.

The Athletic's Shams Charania reported that the deal with Bullock would be worth three years, $30.5 million.

The Mavericks will be the 30-year-old's sixth NBA team.

Brown agreed to terms with the Mavericks on a 2-year deal, the Dallas Morning News's Brad Townsend reported.

The 46th overall pick in the 2017 NBA Draft, Brown played three seasons in Milwaukee before his last season with the Houston Rockets.

He averaged career-highs in the season with the Rockets, collecting 8.2 points and shooting 42% in 24.1 minutes a game.

Brown played four years at Southern Methodist University from 2013-2017 before being drafted.

Center Boban Marjanovic was the second Maverick to quickly resign with Dallas once free agency began on Monday.

Marjanovic agreed to a deal with the Mavericks, the Dallas Morning News's Brad Townsend reported, although exact terms of the deal have not yet been released.

Marjanovic played his past two seasons in Dallas after signing a 2-year, $7 million deal in 2019.

The 32-year-old started three games for the Mavericks in their first-round playoff loss against the Clippers.