The singer first made the announcement during a performance at American Airlines Center in Dallas Thursday night and again in a tweet shared by both the Cowboys and AT&T Stadium on Friday morning.

"Considering I'm a huge football fan, the Dallas Cowboys were always on our TV on Thanksgiving Day growing up, so it is a complete honor to be a part of their 25th Thanksgiving Day halftime show supporting The Salvation Army's Red Kettle Campaign," Combs said in a statement. "I'm used to seeing my friend Ezekiel Elliott jump into the Salvation Army's red kettle, so I've become very familiar with their program, and I'm humbled to be able to try and help put food on people's tables and presents under their trees for Christmas. I hope lots of people will become aware of how they can help this year and beyond through my performance."

The halftime show will mark 25 years the Cowboys have partnered with the Salvation Army to kick off their annual Red Kettle Campaign, which is in its 131st year.

"Luke Comb's energy and spirit are just what we need to put a spotlight on the campaign in this milestone year and especially when so many people are struggling due to pandemic poverty," said Charlotte Jones, executive vice president and chief brand officer for the Cowboys and former national advisory board chairperson for The Salvation Army. "We are so excited to have Combs perform on our national stage for a halftime show that I'm sure will inspire hope and generosity." 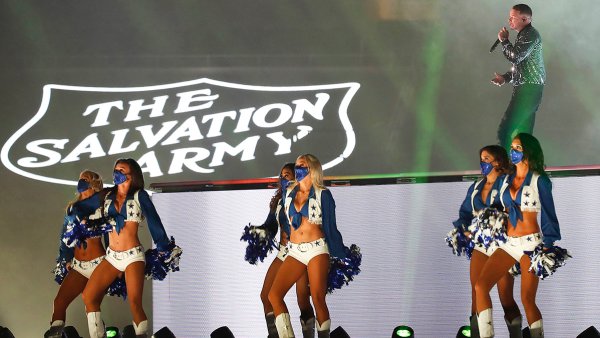 The Salvation Army says the 2021 campaign is the most important yet, as the organization will provide Christmas gifts, food, shelter, rent, and utility assistance to millions of people struggling to keep a roof over their heads this holiday season due to pandemic poverty.

In a statement, the Salvation Army said funds raised in 2020 helped more than 30 million Americans and that they estimate they'll need $175 million -- almost 50% more than what was raised in red kettles in 2020 -- to help keep Americans in their homes this holiday season and beyond.