A North Texas driver captured an apparent case of road rage on video Friday showing a man attack another driver's car with a machete after a minor crash on LBJ Freeway.

The incident took place in Dallas along westbound Interstate 635, just north of Walnut Hill/Kingsley Road, where Dallas police said the driver of a Chevrolet HHR rear-ended a Subaru.

According to the driver of the Subaru, a wreck on the highway was forcing drivers to merge and the HHR driver tried to move into his lane. He says he exchanged words with the passenger about their car getting over.

When the recording starts, the HHR and Subaru are rubbing fenders. The driver of the HHR, straddling two lanes, appears to try to move up and in front of the Subaru, only to be overtaken in the lane.

The drivers collided again and that's when the video shows the driver of the HHR got out of his car, walked over to the Subaru and began swinging a machete, smashing rear car windows. The driver said he was glad his children weren't in the car.

After four swings, more words are exchanged between the two and the man then walked calmly back to his HHR.

You might think the situation is over, but the driver of the HHR accelerated and again tried to pull in front of the Subaru driver who, again, did not yield, and hit the quarterpanel of the HHR, sending it into a very slow, 180-degree spin.

The HHR accelerates out of the frame, driving along LBJ in the wrong direction for an unknown distance.

The 39-year-old driver of the Subaru filed a report with the Dallas Police Department, classified as vandalism and damage to property. He told police he thought the man swung a bat at his car, but he later saw the video he says he realized it was a machete. Dallas police watched the video Monday afternoon and determined the object was a machete. 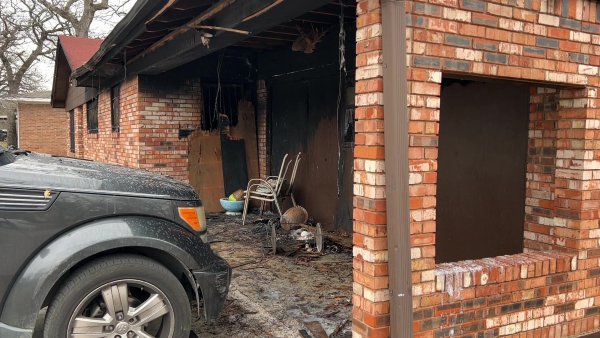 The identity of the driver of the HHR has not been confirmed.

Editor's note: NBC 5 originally reported the man was swinging a machete. Police said the victim thought it was a bat and that is what was included in the police report - and in subsequent versions of this article. After reviewing the video, Dallas police said they, too, believe the object is a machete.