Corey Kluber threw the the major leagues' sixth no-hitter this season and second in two nights, leading the New York Yankees over the Texas Rangers 2-0 on Wednesday night.

The 35-year-old right-hander, nicknamed Klubot for his robot-like demeanor, came within a four-pitch walk to Charlie Culberson in the third inning of throwing a perfect game.

Kluber, a two-time American League Cy Young Award winner, pitched his gem a night after Detroit Tigers right-hander Spencer Turnbull threw one against the Seattle Mariners, marking the first no-hitters on consecutive days since 1969, when Cincinnati's Jim Maloney threw one on April 30 and Houston's Don Wilson on May 1. 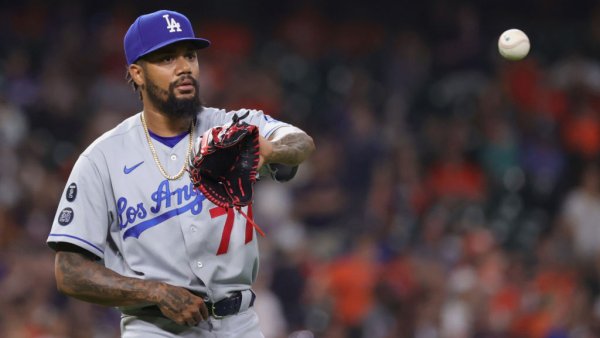 "I had butterflies in that ninth inning, I'm getting a little emotional now, even just getting to witness that was was really, really special," manager Aaron Boone said. "And to see his teammates and the excitement of everyone for Corey and just the excitement for themselves being a part of such a thing. What a performance."

Kluber (4-2) struck out nine and and threw 71 of 101 pitches for strikes in his ninth start for the Yankees. With his fastest pitch at 92.5 mph, he mixed 31 curveballs, 27 cutters, 23 sinkers, 18 changeups and two four-seam fastballs.

Kluber was pitching on that same mound when he was hurt after one inning last season, when he tore a muscle in his right shoulder on July 26 in his Texas debut.

That was the second straight shortened season for Kluber, whose 2019 season ended May 1 when he was hit on the forearm by a comebacker. He left the Rangers as a free agent to sign an $11 million, one-year deal with the Yankees.

Right fielder Tyler Wade made a running catch of pinch-hitter David Dahl's flyball for the second out in the ninth inning before Willie Calhoun's game-ending groundout to shortstop Gleyber Torres. Wade entered in the third inning after Ryan LaMarre injured a hamstring.

Boone said he got nervous on the ball Dahl hit, thinking it was going to get down the line, but then noticed what a good jump Wade had gotten on the ball.

Wade said he wasn't sure, unable to hear the bat off the ball with a screaming crowd of 31,689 -- many of them Yankees fans.

"It stinks. It's baseball. No-hitters happen. There's been a lot so far this year. Unfortunate for us that we've been a part of two of them," Culberson said. "It just shows you how good these pitchers are, these teams are and what they're doing."

It was the 12th no-hitter in Yankees history, the 11th in the regular season and the first since David Cone's perfect game against Montreal on July 18, 1999. It was the fifth against the Rangers, who were nalso at home April 9 when San Diego native Joe Musgrove threw the first no-hitter in Padres history.

"We expected some outings like that in our ballpark, unfortunately not against us," Rangers manager Chris Woodward said. "I can't say enough good things about him. I'm not surprised by this guy's success. I've watched this guy go through his routine and the work he puts in."

New York got its only runs in the sixth inning when Kyle Higashioka had a leadoff walk and scored on a triple by Wade. DJ LeMahieu followed with a sacrifice fly against Hyeon-Jong Yang (0-1).

"Obviously wish this guy well," Woodward said, "but I didn't wish him that well."

The four no-hitters in May are the most in a month since June 1990. It is also the first time three three teams have been no-hit twice in one season, with the Rangers joining Cleveland and Seattle.

Yankees: LaMarre grabbed at his right hamstring just before getting to first base when running out a groundball. ... OF Clint Frazier (neck issues) was out of the lineup for the second game in a row. "I don't know if it's stiffness or what, but we're looking into all that and what it could mean," Boone said. ... C Gary Sanchez, who left Tuesday night's game with cramping in his left hamstring, was available to play. Boone said he had always anticipated Sanchez not playing Wednesday night before the day game for the series finale.

Rangers: 3B Brock Holt (right hamstring strain) played his second rehab game with Double-A Frisco. He has been out since May 3.

The Yankees are 6-3 going into the finale of their trip. Domingo German (3-2, 3.62 ERA) pitches for New York against Rangers right-hander Dane Dunning (2-3, 4.34) whose ninth start will be the most among AL rookies.