Roy Williams has been at the center of Cowboys-talk, basically, since he arrived in Dallas.

Originally, there were questions about his ability to adapt to Dallas' offense; then there were those who wondered aloud whether or not the trade to acquire him would go down as a historic bust (ahem, Troy Aikman); in between, there were countless proponents and detractors coming from any which way, and a (as it turns out) false claims that Williams has never seriously lifted weights.

Answering those concerns was Jeff "Mad Dog" Madden, the legendary strength and conditioning coach of the University of Texas.

Attempting to answer the more looming and, for Dallas, crucial concerns, is also a man who calls Austin home, Longhorns' head coach Mack Brown. I ran across his press conference remarks as reported by Mike Heika over at the DMN College Sports Blog. 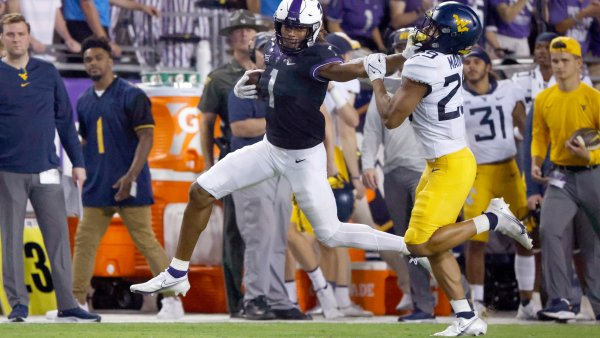 "Roy Williams is one of the great athletes I've ever been around," Brown started. "He's really a good person. He's been in a tough situation in Detroit."

Okay Mack, I think we can all agree on that. Williams is certainly a great athlete, and playing in Detroit from 2004-2008 would be a loathsome spot for anyone who likes to score touchdowns. As far as Williams as a person...he seems agreeable enough.

"I think when he came into Dallas last year, he came in late and didn't really know the system," Brown continued. This too, is true. Williams didn't exactly hit the ground running in Dallas. How long, exactly, it takes for a receiver to learn, and feel comfortable, in a new system, I don't know. But I, like Mack, will give Williams the benefit of the doubt on this one.

"I think we'll see Roy Williams have a breakout year and be as good as any receiver that we've ever seen,'' Brown concluded.

Roy Williams having a breakout year isn't inconceivable; he is, after all, only two years removed from a Pro Bowl appearance; he has worked very hard to develop a relationship with his quarterback in the offseason; and, unless something terrible happens, Dallas' offense in 2009 will be a sight better than that of Detroit in any of the 4 1/2 years he was there.

But one of the greatest receivers we've ever seen?

Williams has shown the capacity to put up fairly monstrous numbers, albeit only once, when he caught 82 passes for 1,310 yards and seven touchdowns in 2006. But Williams season-high for touchdown grabs is eight.

Terrell Owens has not caught  less than nine in any season since the 2000 season, unless you count 2005. That was the year Mr. Getcha Popcorn Ready managed to anger the entire city of Philadelphia, get suspended and throw quarterback number two under the proverbial bus. The suspension limited Owens to seven games--and he still caught six touchdown passes.