Woman charged with aggravated assault against a public servant, arresting document says she fired toward a police officer inside the airport

A woman who fired several rounds near the ticketing counter inside Dallas Love Field Airport late Monday morning was yelling about her marriage and threatened to blow up the airport in the moments before she was confronted and shot by a Dallas police officer, police say.

Dallas Chief of Police Eddie Garcia said the woman, identified by police Monday afternoon as 37-year-old Portia Odufuwa, was dropped off at the airport just before 11 a.m. by an Uber driver.

Showing surveillance video from the airport during a news conference Tuesday, the chief said the woman entered the airport and went to a restroom before exiting several minutes later with a dark-colored hoody pulled tightly over her head and with her hands in her pockets. He said she then went to the ticketing area and was seen walking around the kiosks.

Garcia noted the woman's behavior near the kiosks drew the attention of a nearby uniformed Dallas police officer, identified as Officer Ronald Cronin, who was walking toward her when she stopped and said she had an announcement. The woman, according to witnesses, began talking about her marriage, incarceration and made threats to blow up the airport.

Showing surveillance video from the airport during a news conference on Tuesday, Dallas Police Chief Eddie Garcia said the woman entered the airport and then walked into a restroom. In the video, the woman can be seen leaving the restroom and walking toward a kiosk area, pointing the gun toward the ceiling where police said she fired two shots. She...

In the airport surveillance video, the woman can be seen pointing the gun toward the ceiling where police said she fired two shots. She was quickly confronted by Cronin who police said ordered her to drop the weapon. Police said when she pointed the gun in the direction of Cronin and a bystander he fired several shots, striking the woman multiple times.

“You have to shoot and stop the threat. Him moving and looking for cover, that’s just where the round went,” Garcia said. “If you look at what that officer had to do with, quite frankly, shooting over some people, trying to get a line of sight, kind of trying to find the perfect angle to get a shot at her as quickly as possible.”

No other injuries were reported and Garcia added he was proud of the quick response from all of the officers working inside Love Field, including the 15-year veteran who took down the armed woman.

In a tweet, Garcia said that officers can be trained on tactics and scenarios but that they can't train officers to be brave or show courage. Garcia said Cronin was both a guardian and a warrior on Monday.

During the investigation, according to an arrest warrant affidavit obtained by NBC 5 Tuesday morning, police said they found a round in a kiosk near where the officer took cover that they said came from the woman's gun, indicating she fired at least once in the officer's direction.

Garcia said the woman's gun was capable of holding 16 rounds. They found five rounds remaining in the gun and three casings at the scene.

The chief said the woman was taken to Parkland Memorial Hospital where she underwent surgery and was said to be in stable condition.

Dallas police said Odufuwa has been charged with aggravated assault against a public servant. Garcia said she may face other federal charges. No further information about her motivation for the shooting has been confirmed by the police. 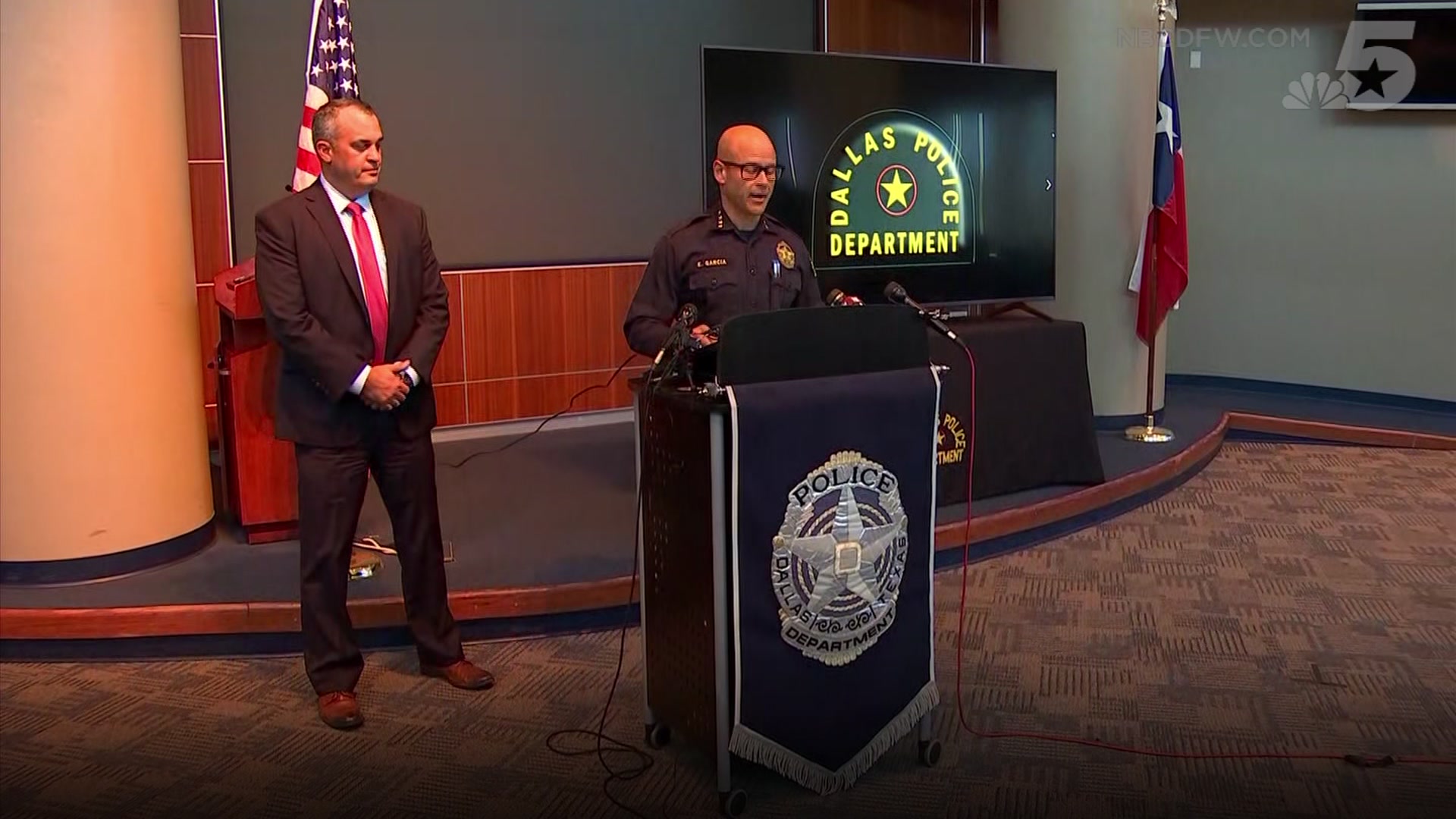 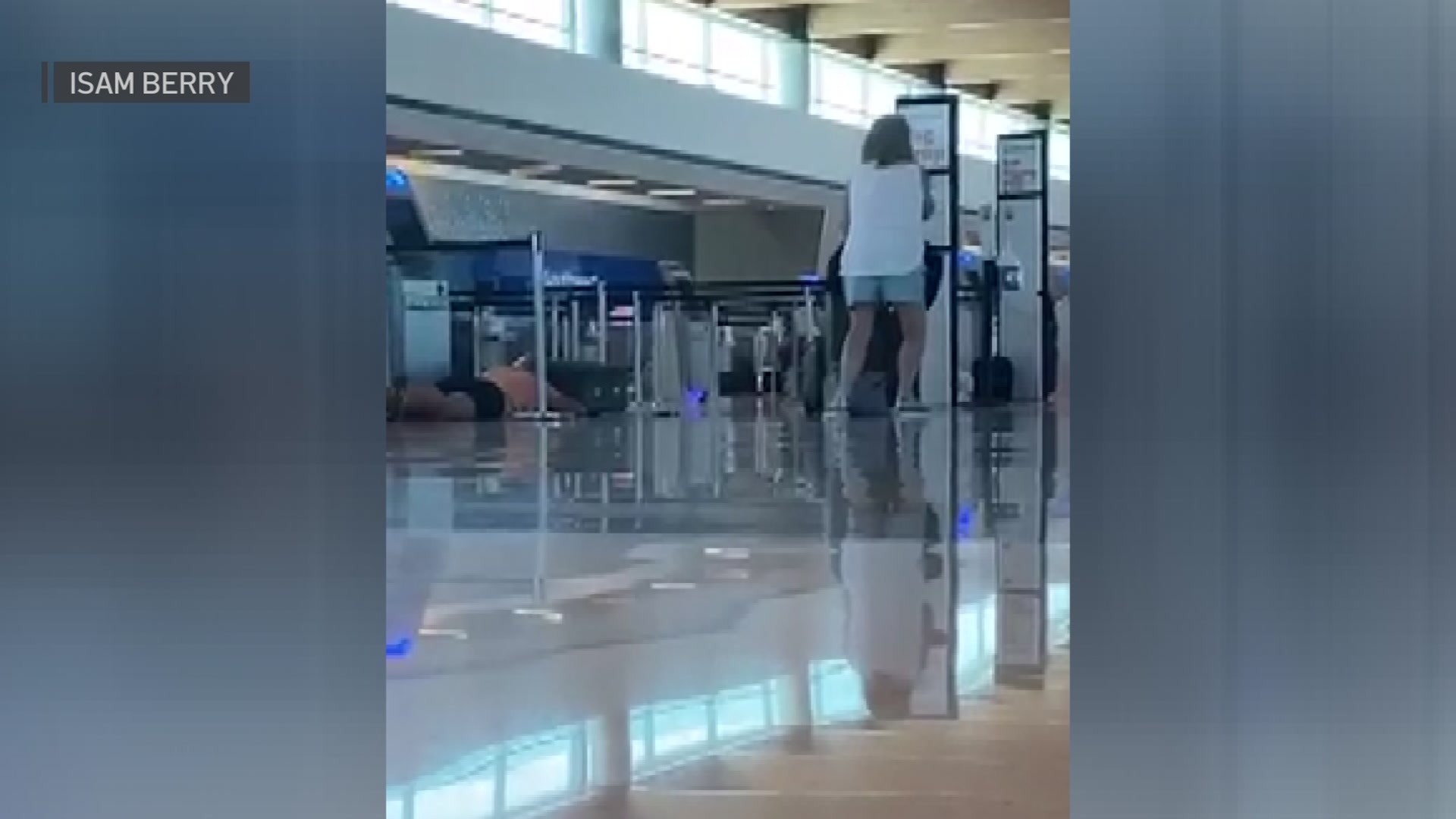 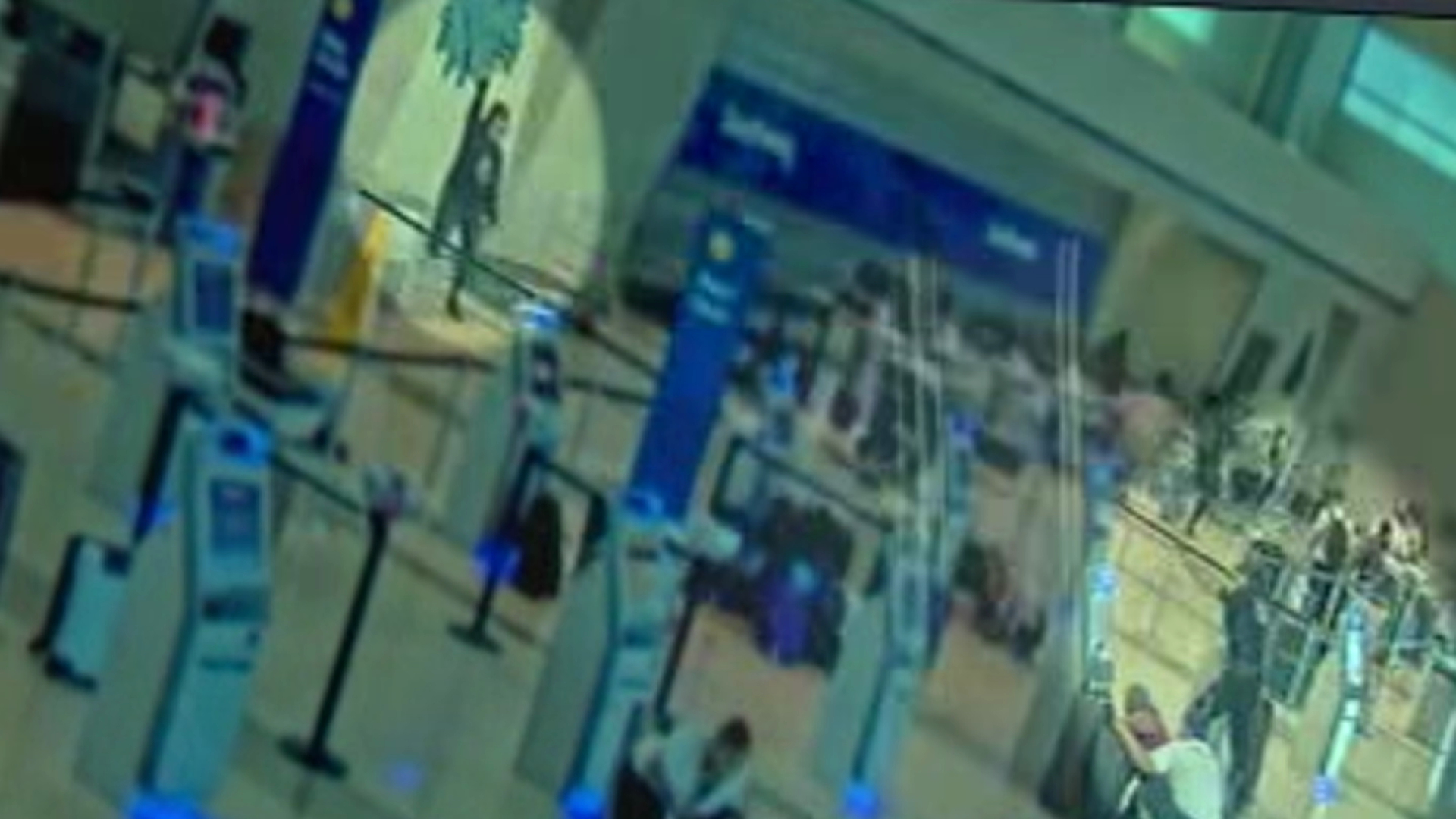 Based on the surveillance video shown Tuesday afternoon, it does not appear that Odufuwa changed clothes after arriving at the airport, as originally reported by police. The investigation into the shooting is ongoing and Garcia reiterated Tuesday that he expected elements to change as more is learned about what happened.

The Dallas FBI and ATF are assisting Dallas police in the investigation. The FAA told NBC 5 that the incident is a police matter.

The shooting wasn't the first violent incident at the airport. In 2016, a police officer shot and wounded a man outside of Love Field after police said he advanced toward the officer with large landscaping rocks in his hands after battering his ex-girlfriend's car with a traffic cone and rocks as she dropped him off at the airport.

DALLAS POLICE SAY WOMAN WAS PROHIBITED FROM HAVING A GUN

Garcia said Tuesday that Odufuwa was legally prohibited from possessing a firearm since August 2018 based on her history, which he shared during a news conference Tuesday afternoon. According to Garcia, Odufuwa was arrested in connection with the following incidents.

Odufuwa has been found incompetent for trial more than once and has been referred to outpatient mental health services.

Garcia said the gun Odufuwa used Monday was not registered to her and that Dallas police are working with the FBI and ATF to determine where the gun came from and how it came to be in her possession.

According to the arrest warrant affidavit, after entering the airport and leaving the restroom Odufuwa headed toward the ticket counter at Southwest Airlines at about 11:06 a.m. It was there where witnesses said she made comments about her purported husband while shouting threats to blow up the airport.

Colby James spoke with NBC 5 Monday afternoon and said he was standing near the woman when she pulled out a gun and started shooting.

James said the woman said she had an announcement to make and said something about her husband cheating.

"She basically said her announcement, talking about her husband was cheating or something. And she basically said she was about to blow this sucker up. After she said that she pulled out a gun. She fired the first shot in the air and basically, everybody scattered," James said. "We were running. There were 10-12 more shots after that."

Karen Warner told The Dallas Morning News that she was checking in for her flight when she heard a loud argument about 20 feet behind her, followed by a gunshot. Then she started running.

"I heard about 10 more shots while I was running away," said Warner, who couldn't discern what the argument was about.

Cellphone video shared with NBC 5 showed travelers in the secure area of the airport on the ground, behind chairs at the gates and sheltering in place while the shooting unfolded.

WHO DROPPED OFF THE ARMED WOMAN AT LOVE FIELD?

According to the arrest warrant affidavit, the woman was dropped off at the airport at about 10:57 a.m.

Police said the woman exited a 2015 Kia Rio with Mississippi license plates and entered the airport without any luggage.

During a news conference on Tuesday afternoon, Garcia said police have spoken with the driver and learned he was an Uber driver and not involved in the incident. 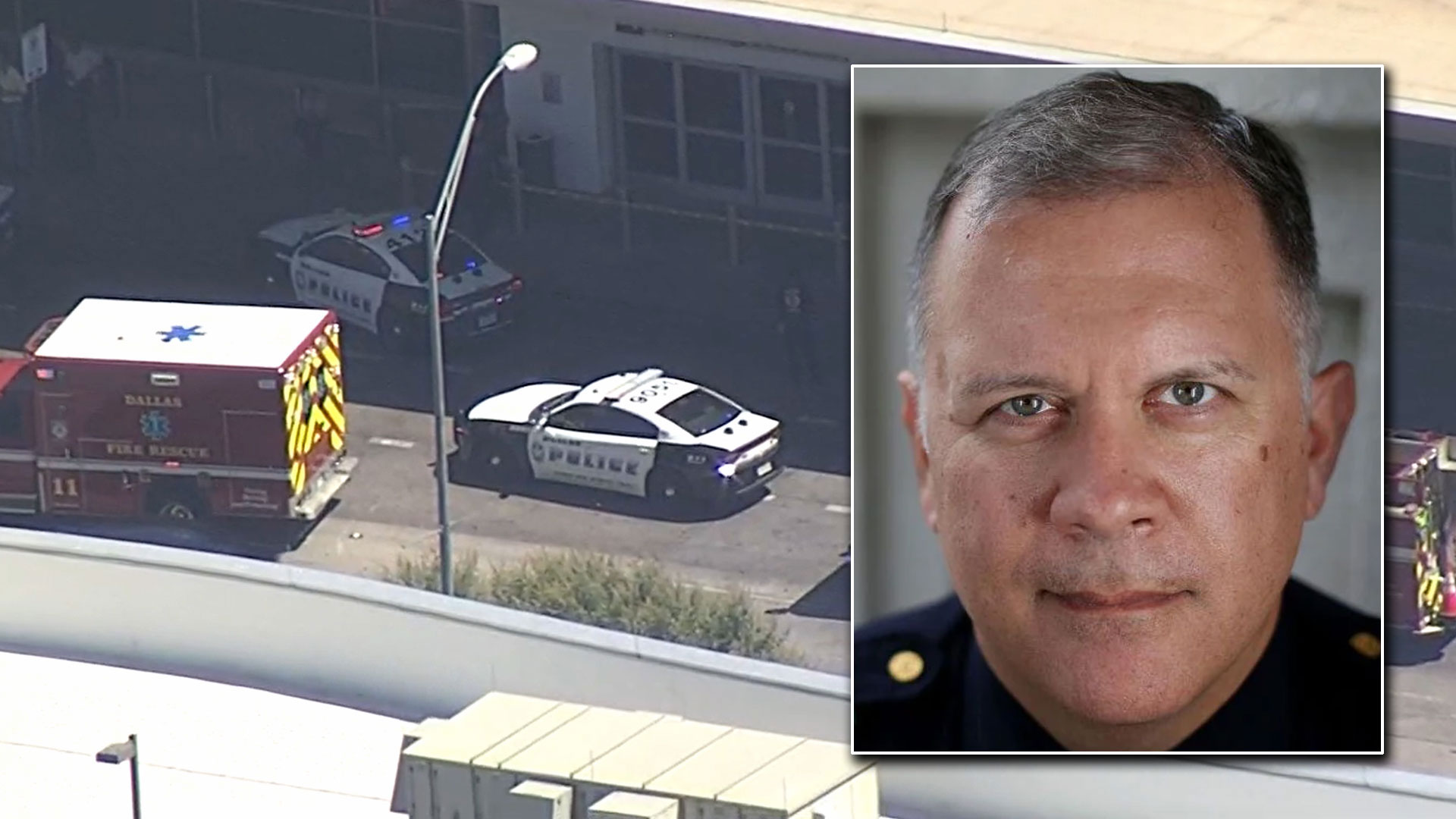 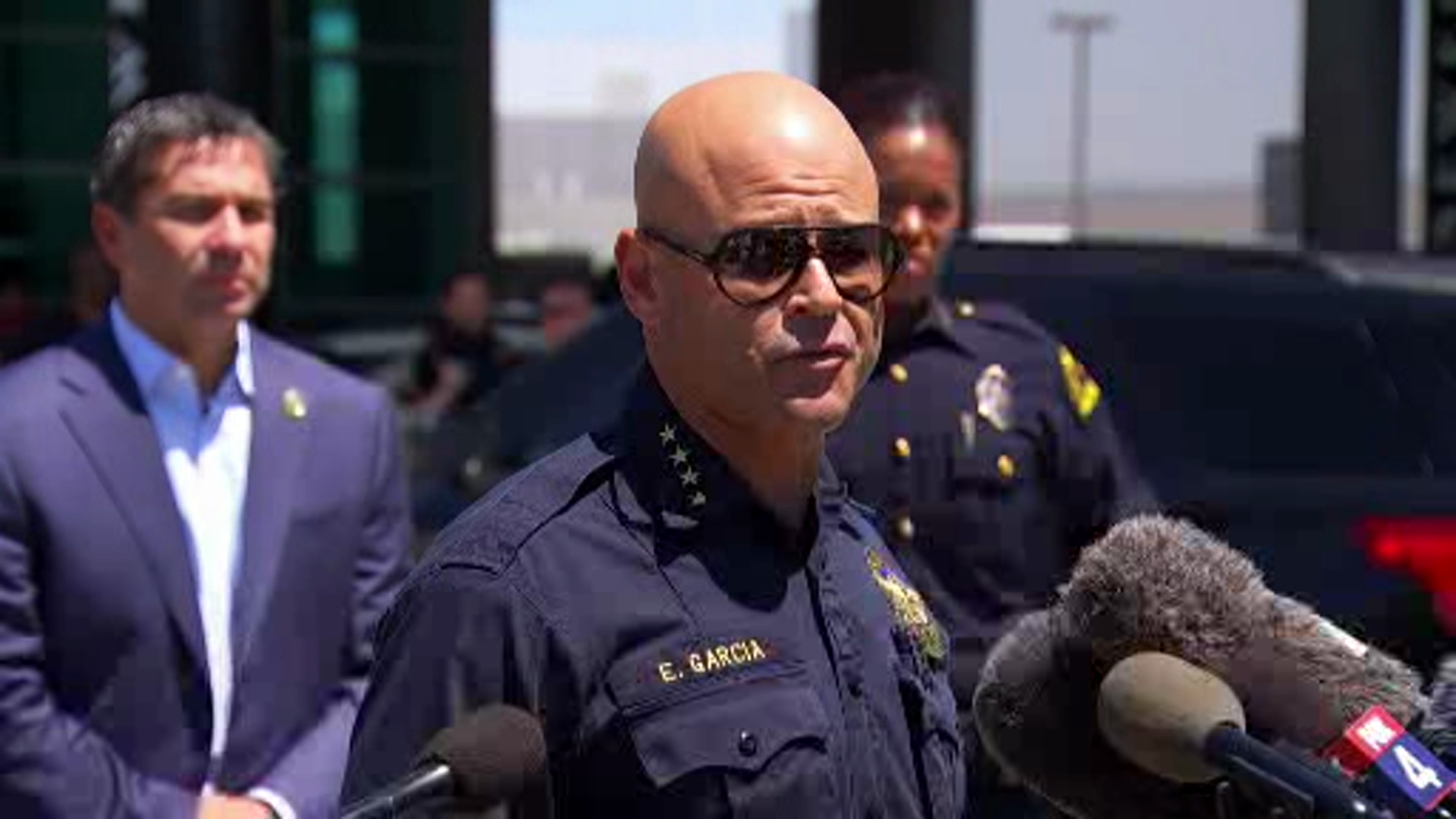 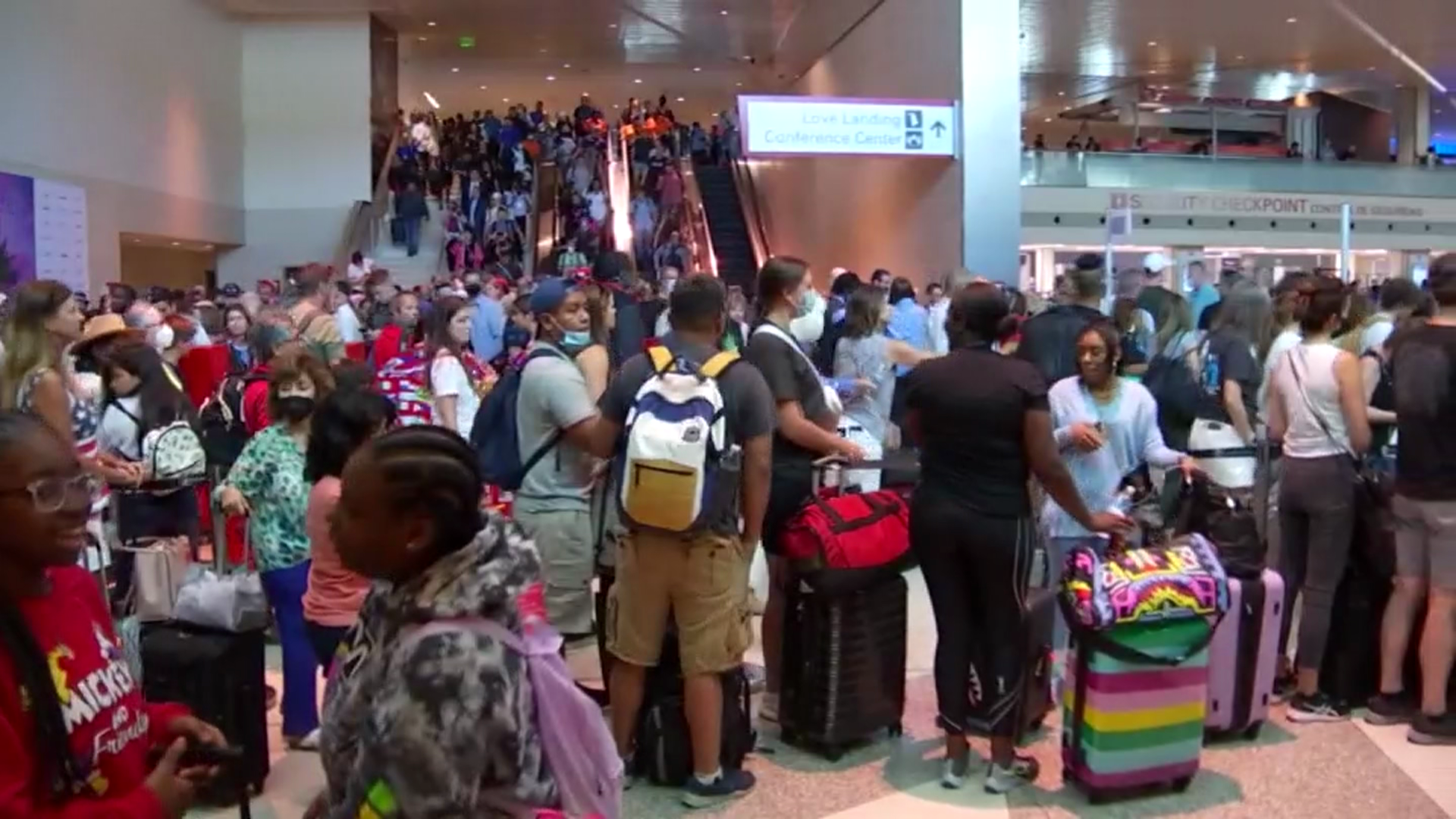 ROCKWALL CHIEF PASSING THROUGH SECURITY WHEN SHOTS WERE FIRED

Max Geron, Chief of Police in Rockwall, told NBC 5 in a phone interview Monday morning that he and his family were going through security when they heard gunshots.

Geron said a number of shots were heard near a baggage or ticket counter area. He said he grabbed his kids and that the TSA agents responded quickly by shuffling travelers into secure areas.

He said the TSA then got word that "the shooter was down" and they were evacuated out of the airport and sequestered in an outdoor location.

All inbound flights to Love Field, which is one of the Dallas-Fort Worth area's two major airports, were held at their departure points until 2:30 p.m. Monday The airport suspended airport operations during the investigation but said at about 3:45 p.m. that flight operations had resumed.

Travelers were still encouraged to check the status of their flight before heading to the airport.

Love Field said at about 2 p.m. Monday afternoon that while operations at the airport were suspended passengers were moved out of the terminal to be rescreened by the TSA. Video from inside the airport Monday afternoon showed a congested scene with travelers filling the lobby area near ticketing and baggage claim. 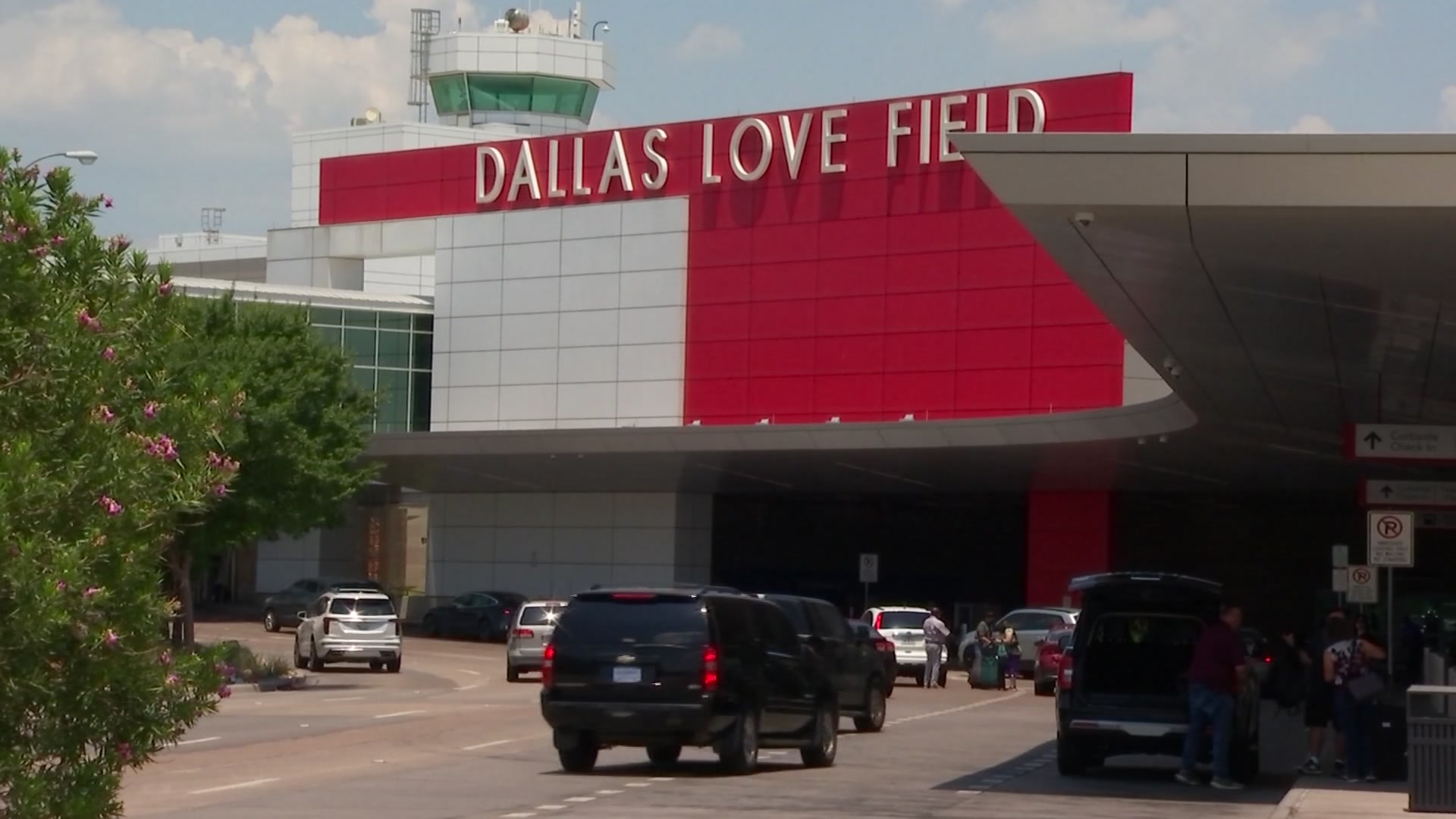 Dallas Love Field Airport, Airlines Work to Get Back on Track After Active Shooter Situation 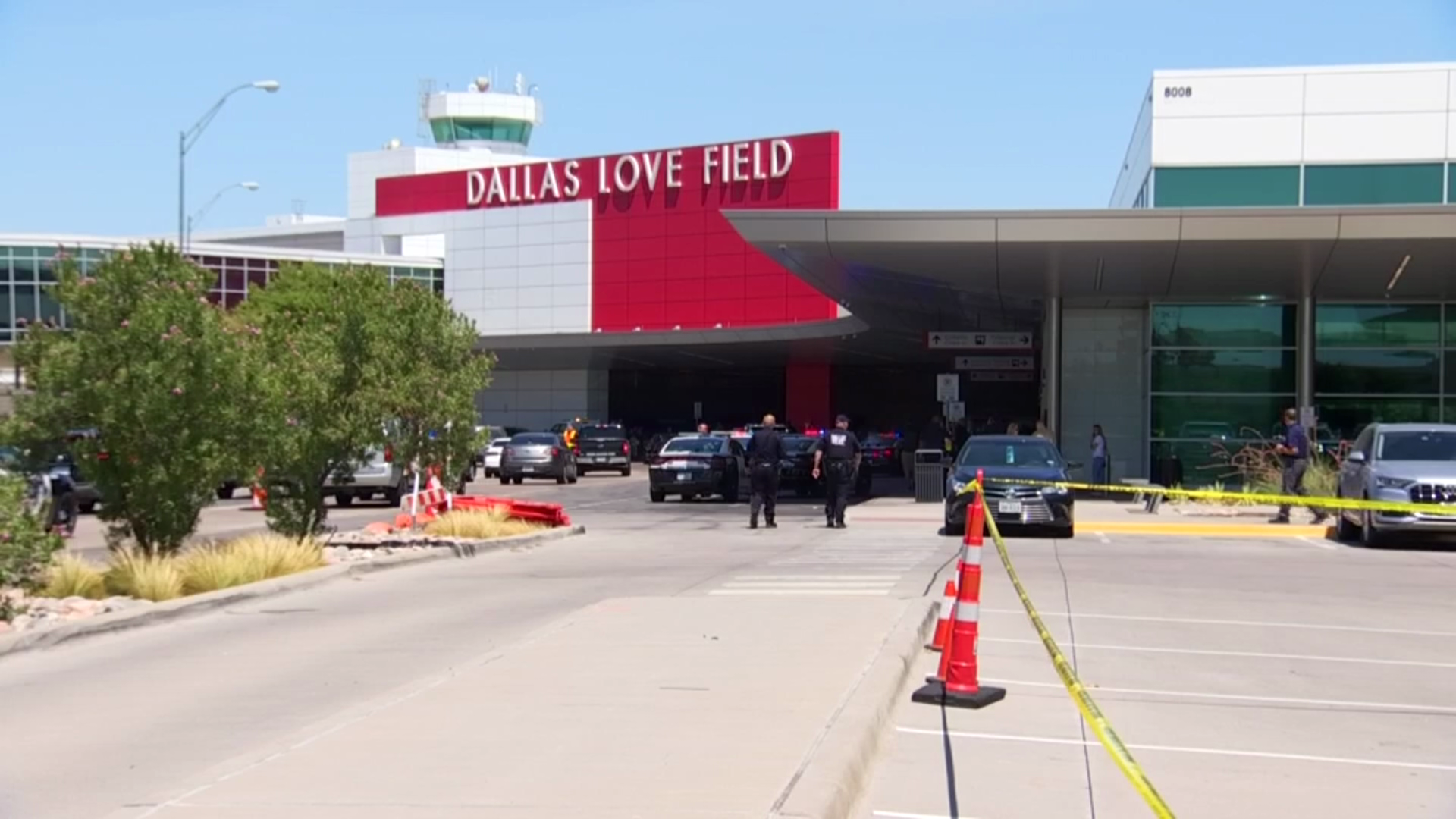 Delays Winding Down at Love Field Airport After Shooting 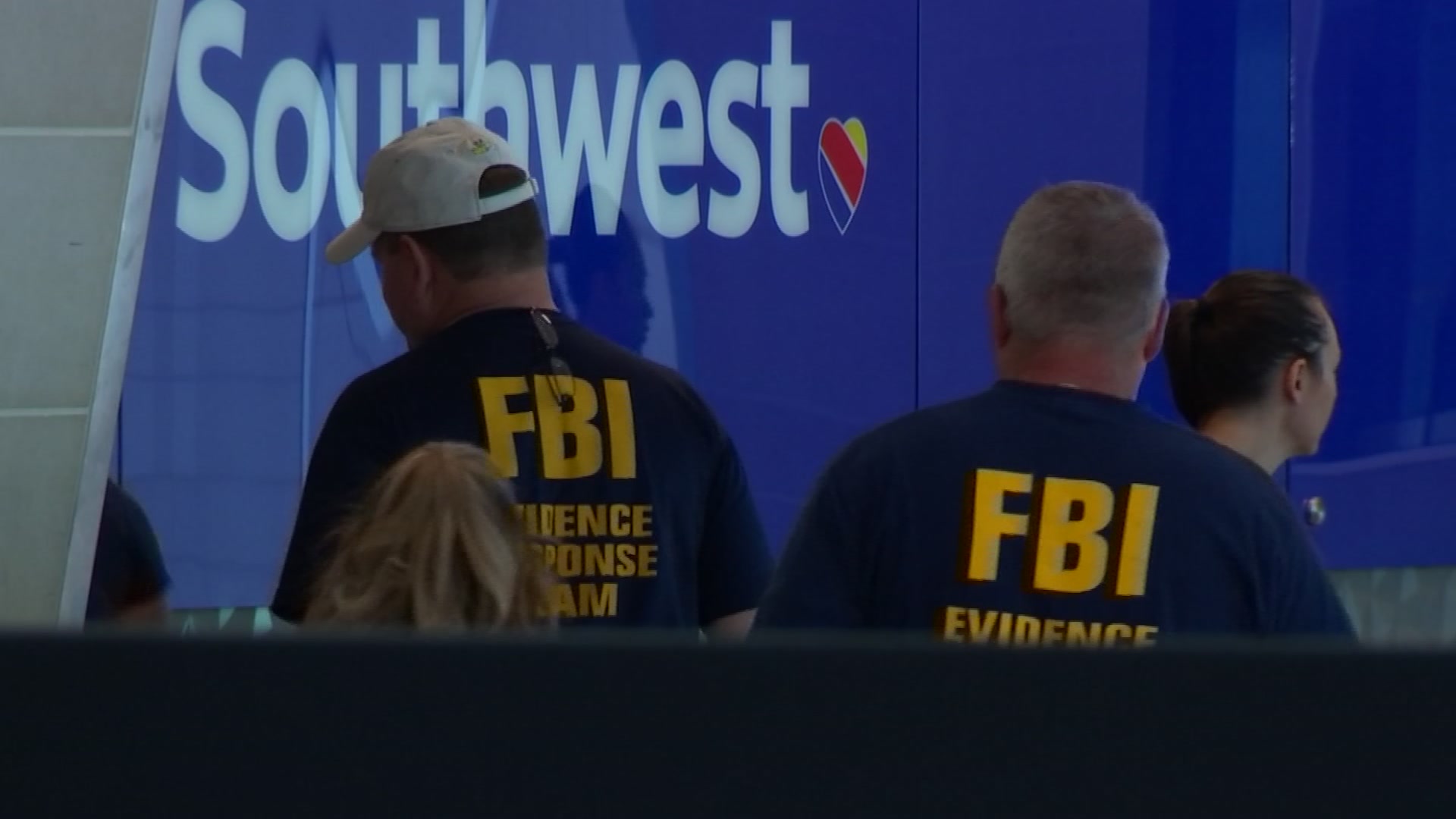 After Shooting, Love Field Airport Operations Resume Back to Normal

Southwest Airlines issued the following statement early Monday afternoon saying they "paused all departures and arrivals as we wait for additional information from authorities" and that "there’s no greater priority for us than the safety of our employees and customers, all of which are reportedly safe."

Lynn Lunsford, with the FAA, told NBC 5 after noon Monday that there was no immediate estimate Monday afternoon on the number of flights diverted due to the incident.

A 15-year-old girl is dead after a pickup truck crashed into her home Sunday evening, White Settlement Police said. The driver was arrested for intoxication manslaughter and assault.
Delays are unwinding down at Dallas Love Field after a shooting sent passengers running and others diving behind chairs and counters for safety. A woman is in custody after a police officer shot her seconds after the opened fire. NBC 5's David Goins reports.