Casino Projects Ad on Side of ‘Leaning Tower of Dallas'

To see a live feed of the demolition of "The Leaning Tower of Dallas" click here.

An Oklahoma casino took advantage of Dallas' newest landmark Tuesday night, projecting an ad onto the side of the "Leaning Tower of Dallas."

An ad for Choctaw Casino & Resort in Durant, Oklahoma appeared on the side of the tower Tuesday night saying, "Have Better Luck With Us."

“Yesterday once we realized the building was still there, one of our art directors had a great idea for capitalizing on that," said Cassandra Grenfield, strategist and producer for The Richards Group.

The ad agency's building sits on the other side of the Central Expressway, giving employees a birds-eye view of "Leaning Tower of Dallas."

An ad for Choctaw Casino & Resort in Durant, Oklahoma was projected on the side of the tower Tuesday night. Demolition crews began to use a wrecking ball to take down the remaining portion of the building on Monday, but the development company said Tuesday it could takes days or weeks to completely finish the demolition process.

“It’s been fantastic, you’ve literally had nose prints form watching it every day it’s in our backyard, it’s fantastic," said Glenn Dady, Creative Director for The Richards Group. In Dec., he was announced as the successor to the company's founder, Stan Richards.

Dady said he too has enjoyed the "Leaning Tower of Dallas" and watched the creation of it from his office when the initial implosion took place.

“I was here the day that it went down and my grandson with a photograph with his finger holding it up," he said.

The agency's decision to turn the concrete slab into a billboard for one if its clients was an idea that came up very quickly.

Grenfield said the thought to create a real-life meme came to fruition around noon on Tuesday, they then had to get Choctaw to agree. Once the casino gave them the green light, the agency reached out to one of its vendors to project the image.

The vendor had to build a riser near their parking lot to put the heavy-duty project on.

“We knew that once the building was still standing, that there were going to be tons of internet memes and continued messaging about that and so and so it was a great opportunity to incorporate Choctaw and make them part of that culturally relevant moment," said Grenfield.

“People are giddy here today, it’s really fun looking at it, lots of congratulations," said Dady about the reception to the billboard.

The tower was scheduled to be imploded Feb. 16, but the center core of the building survived the implosion.

Monday, demolition crews began using a wrecking ball to take down the remaining portion of the building, kicking off a process that may take three to four days to complete.

In between, the "Leaning Tower of Dallas" became a social media sensation, with people stopping by to strike a pose with what remained of the structure.

The development company said Tuesday it could take days or weeks to completely finish the demolition process.

Wednesday afternoon they had to suspend using the wrecking ball due to the wind. 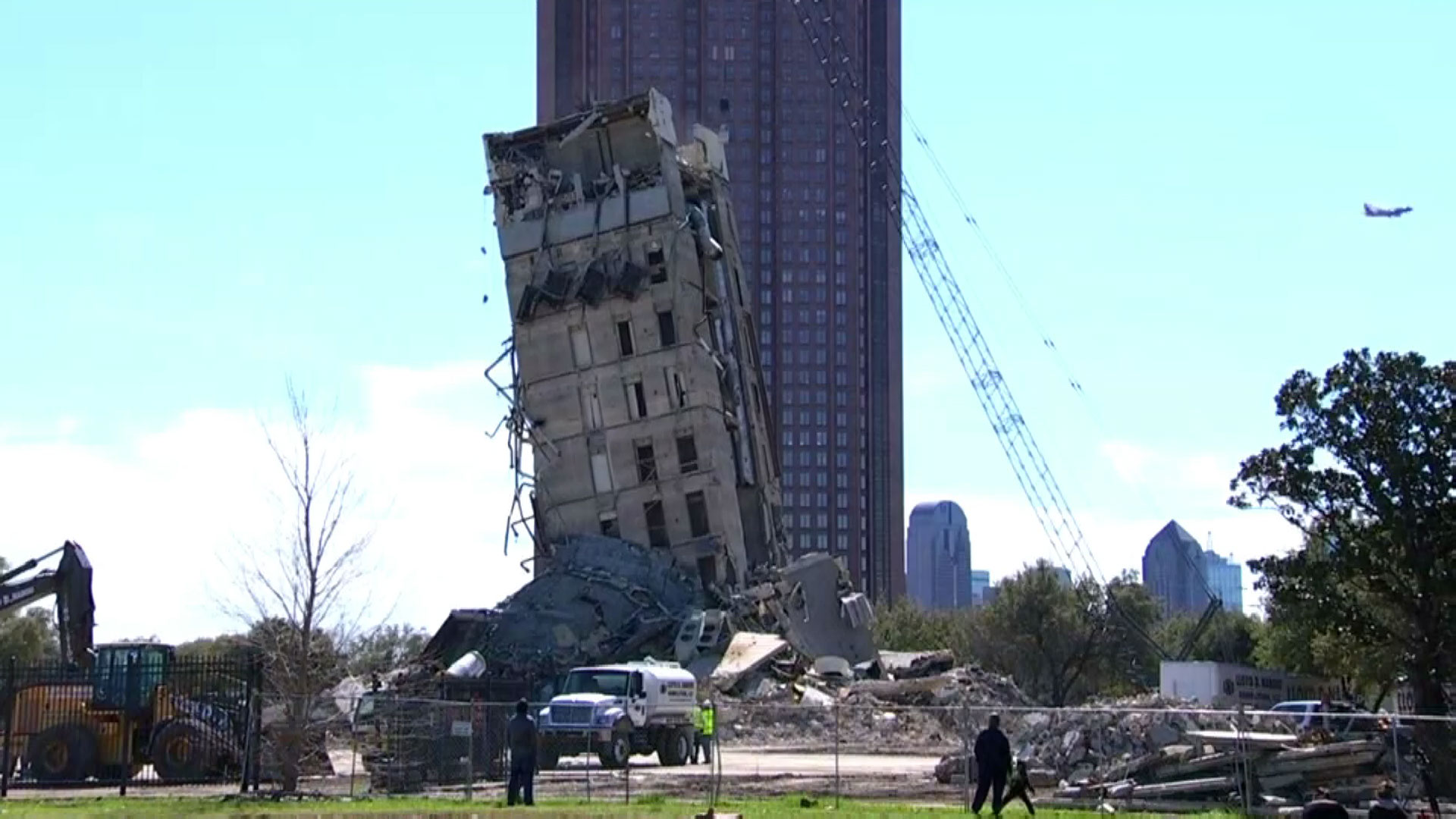 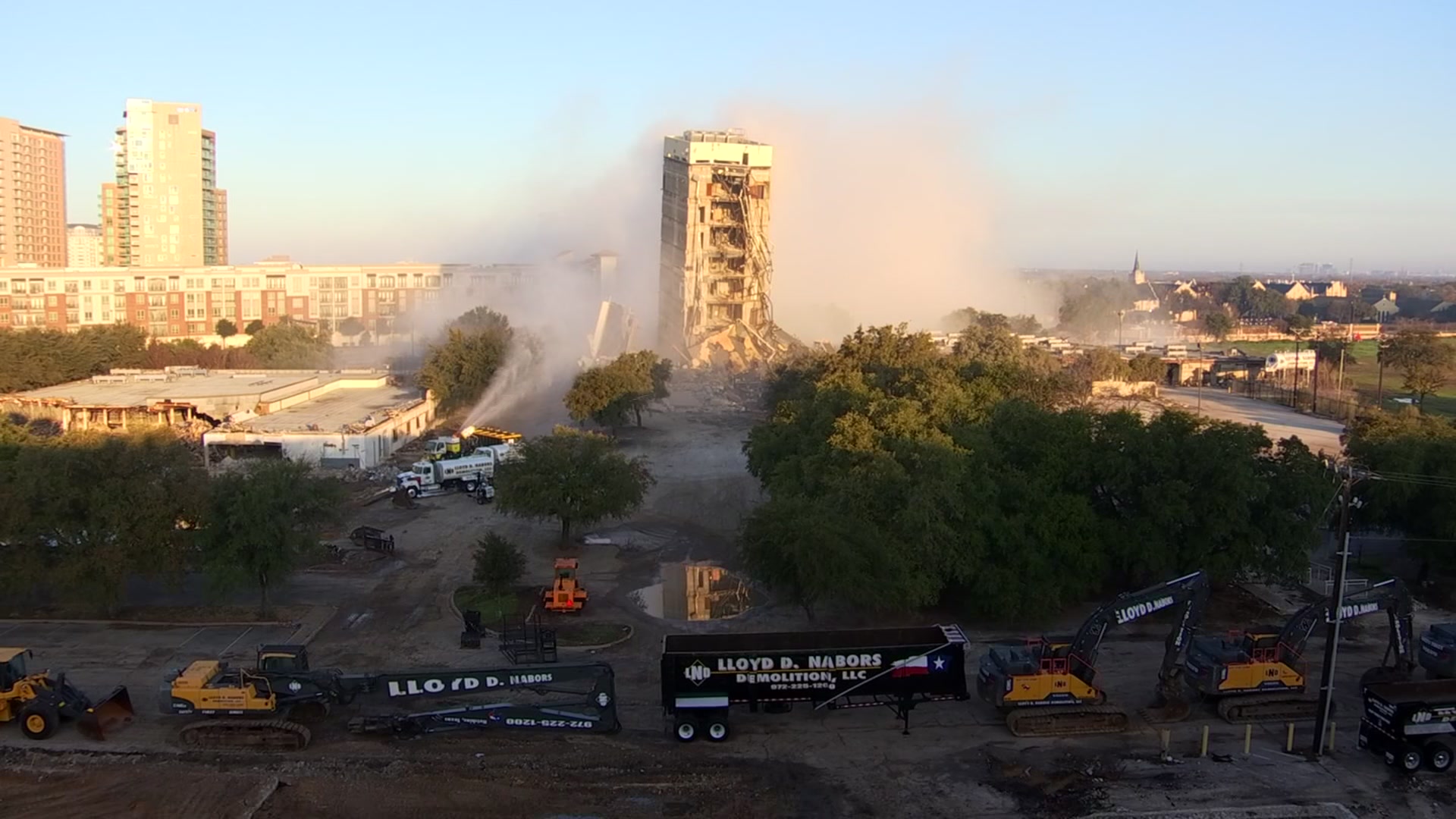