A tornado that was visible on the S-Band Radar is confirmed to have crossed I-35E at that location, NBC 5 Meteorologist Grant Johnston says

Emergency officials on Tuesday will be surveying the damage left by at least two tornadoes during severe weather Monday night in North Texas.

In Hill County, the National Weather Service confirmed an EF-2 tornado brought 130 mph winds to an area northwest of the town of Blum. The tornado touched down at about 7:25 p.m. Monday.

Those injured included three truck drivers whose big rigs were sent out of control along Interstate 35E, near Waxahachie, as a tornado passed overhead.

Authorities in Ellis County give an update Tuesday morning on the emergency response to destruction left by a tornado and severe storms Monday night.

"We're blessed that it wasn't a lot worse," Little said during a news conference Tuesday morning. "We don't know exactly what level the tornado was, but we do know of the straight-line winds."

A survey team from the National Weather Service will be examining the damage to determine the strength of the tornado.

"But it's obvious to me when you look at the damage, there was a touchdown of some type here last night," Little said.

The drivers of three tractor-trailers involved in the crash were taken to Baylor Scott & White Medical Center in Waxahachie. One of the drivers was seriously injured, a DPS spokesman said.

"I've heard that contractors jumped out of their trucks last night on 35 and handed their saws and machines to the guys that were stuck in the semis," Little said. "They literally cut one guy out from the bottom of the 18-wheeler."

Both sides of the interstate were closed for about five hours. All lanes were reopened shortly after 3 a.m.

An early investigation indicated two tractor-trailers were pushed into the center divider with a third being pushed off the interstate. At least one of the big rigs was toppled over, spilling what appeared to be a shipment of Nutella.

Search and rescue teams worked through the night in the damaged area, outside the town of Forreston, pulling residents from mobile homes that had toppled over.

First responders from cities across multiple counties were at one point hampered by traffic congestion due to the closure of the interstate and U.S. Highway 77, Ellis County Emergency Management Coordinator Samantha Pickett said.

In Forreston, a boil water notice will be in effect due to power outages and the lack of running water, Pickett said. A water distribution site will be set up at WDC Recycling.

Damage was also reported southwest of Dallas-Fort Worth.

NBC 5 viewers shared their videos of a tornado funnel near Blum Monday evening.

In Granbury, the roof of a church in the 1900 block of West Highway 377 was ripped off by the wind, Hood County Sheriff Roger Deeds said. No one was in the church at the time and no injuries were reported. 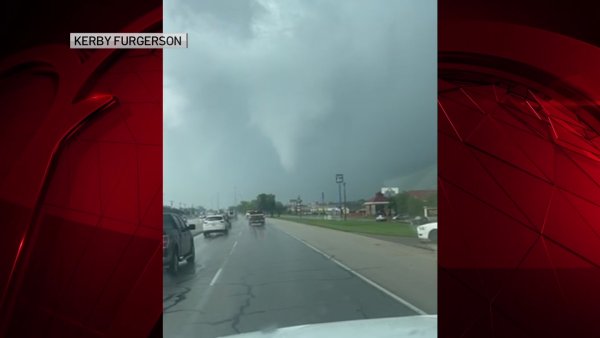