Looks like the rust is gone for Simone Biles. Well, almost.

The reigning Olympic and world gymnastics champion put on a dazzling show at the U.S. Championships on Friday night, posting a score of 59.550 that makes her seventh national title a practical certainty.

The 24-year-old expressed a bit of frustration after miscues on balance beam and uneven bars during the U.S. Classic two weeks ago, her first meet in more than 18 months. She certainly looked more polished with the Olympic Trials in three weeks and the Tokyo Games less than 50 days away.

Wearing a leotard with the outline of a goat -- a nod to her status as the Greatest of All Time -- on her right shoulder, Biles showcased why she's in a class all her own, even on a night when she chose to keep her latest possibility-pushing innovation under wraps.

Biles wowed in Indianapolis last month when she became the first woman to complete a Yurchenko double-pike vault in competition. She landed it in practice Wednesday but opted to go with a pair of vaults with lower difficulty instead. She drilled her Cheng and took a pretty sizable step after landing her Amanar but still had little trouble posting the highest score -- 15.800 -- of the night.

She wasn't done. Her uneven bars routine was largely mistake-free just two weeks after falling to the mat after failing to make a connection. Floor exercise -- a minute-plus showcase of the soaring athleticism that's made Biles the rare gymnast with massive crossover appeal -- continues to be an issue. Sort of. Biles tumbles with so much power that control is sometimes a problem. She stepped out three times, leaving her with a somewhat exasperated look on her face afterward.

Not that it mattered. Even with the mandatory deductions, her 14.650 score was still nearly a half-point ahead of Leanne Wong's 14.200.

"Tonight I feel like it was really good," Biles said. "It was definitely better than Classic. … Floor could have been a little bit better. I need to control my adrenaline a little bit better going into my passes but I'm not mad at today's meet at all." 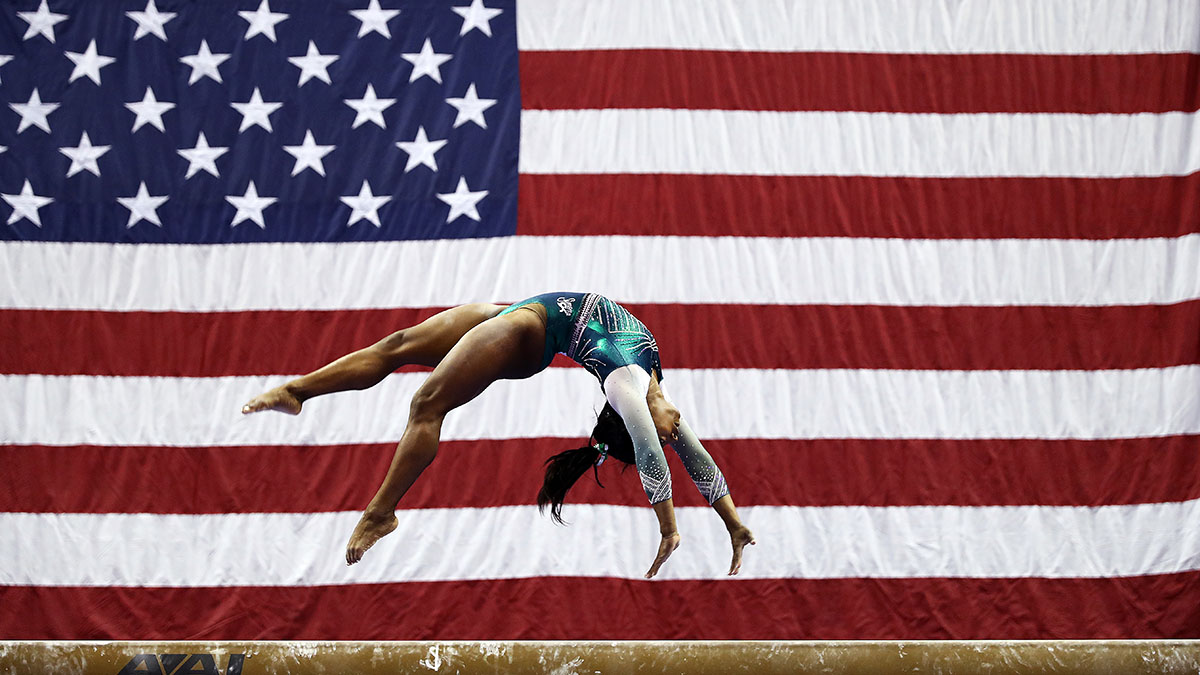 Biles And Who? Olympic Picture Cloudy at US Championships 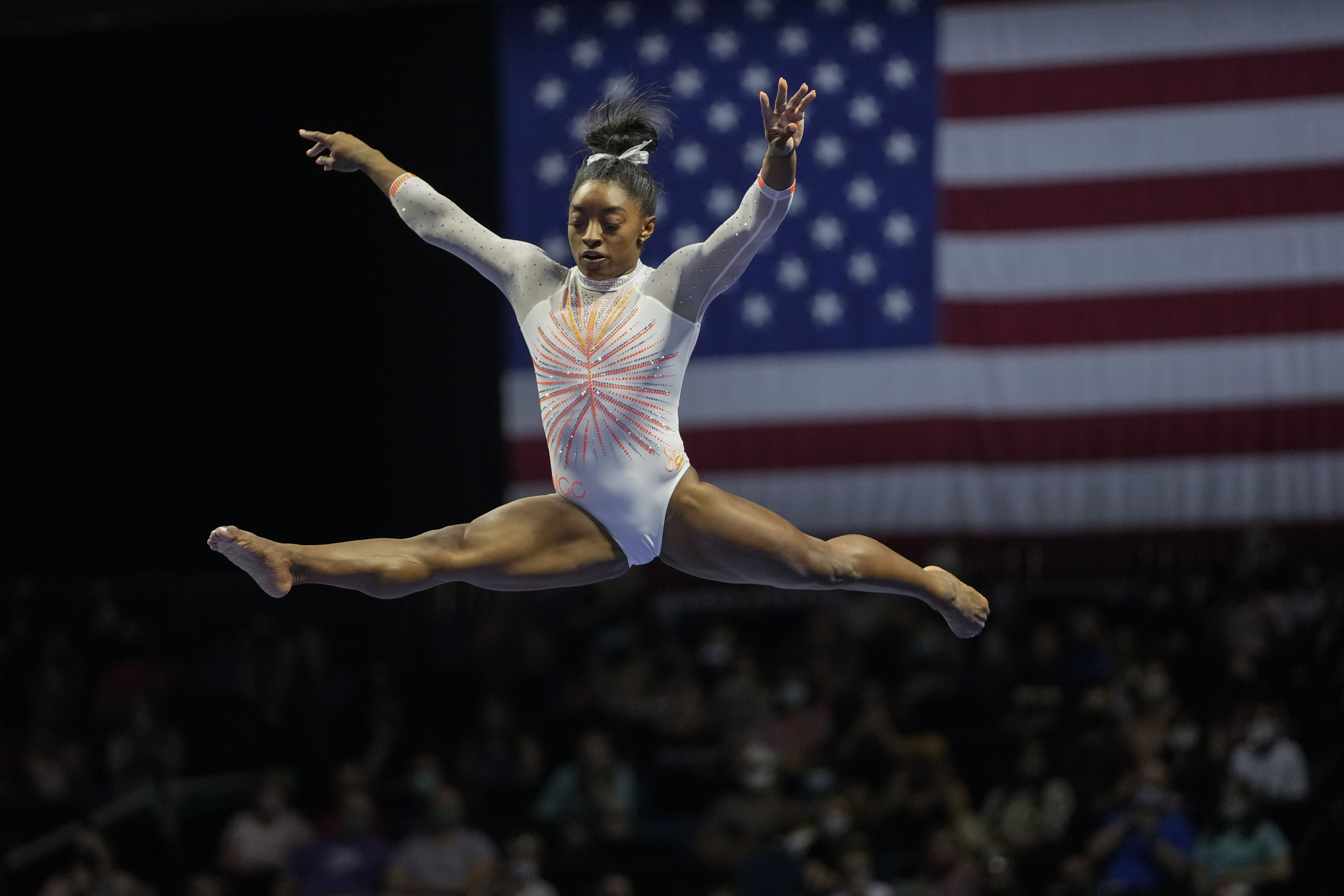 While Biles is basically running a systems check as she attempts to become the first woman in more than 50 years to repeat as Olympic champion, the picture of who will join her in Tokyo is starting to come into focus.

Sunisa Lee, competing on a balky ankle that's forced her to walk with a noticeable limp any time she's not competing, started with a spectacular series on uneven bars -- where she's one of the best in the world -- and hung in there the rest of the way. Her score of 57.35 thrust her back into the conversation, a conversation that seemed iffy after competing on just two events last month.

Not so much anymore. With her father, John, watching from the stands for the first time since being partially paralyzed in the summer of 2019, Lee looked every bit the gymnast who is among the world's best when she's at her best.

"It just felt really good to be back out there because I feel like people kind of counting me out a little bit because I was only doing bars and beam for a little bit," Lee said. "But I think better by Trials. I think I'll be back to 100 percent."

Jordan Chiles continued her remarkable rise. Her confidence seemingly growing with each rotation, Chiles is making a compelling case for an Olympic berth. The 20-year-old is third overall at 56.900 finished in the top six in all four events, including runner-up to Biles.

Perhaps just as importantly, she found a way to survive a sometimes iffy balance beam set, a sign of just how far she's come since she started training alongside Biles two years ago.

Jade Carey is fourth, followed by Wong, Kara Eaker and Emma Malabuyo. Kayla DiCello, coming off a steady third at Classic, came off both bars and beam and finds herself in ninth.

Two-time Olympic medalist Laurie Hernandez's night ended early. The 20-year-old hyperextended her right knee while attempting her beam dismount during warmups. She gutted through her routine and appeared to be in pain after finishing. Hernandez ended up scratching on uneven bars but tweeted she is "keeping an open mind" about competing during Sunday's finals.

Chellsie Memmel, the 2005 world champion and a 2008 Olympic silver medalist, competed in three of four events. With the crowd roaring at every turn, she finished fifth on vault and sixth on beam. While Memmel is not in serious contention for an Olympic berth, her comeback wasn't "Tokyo or bust." The 32-year-old made significant strides from Classic and more than held her own with a group of athletes who are in some cases literally half her age.