‘This Has to End': Jill Biden Sees Ukraine Moms' Heartbreak

Most of the Ukrainians who have fled to Romania, mainly women and children, have moved on to other countries, but about 100,000 remain, officials said

Jill Biden heard heartbreaking stories Saturday from Ukrainian women and children who fled Russia’s war and found safe haven in Romania, with one mother telling the U.S. first lady of a harrowing escape after being holed up in a cramped, cold basement with her traumatized 8-year-old daughter.

Reaching Romania “was a game change for us,” Svitlana Gollyak of Kharkiv, Ukraine, told Biden in her native language during the first lady's tour of a Bucharest public school hosting refugee children. Gollyak said her daughter "feels much better here. ... No more tears and she adapted very nicely.”

Biden told Gollyak and the other women, “I think mothers will do anything for their children,” adding that they were “amazingly strong and resilient.”

Biden said her message to the families was “we stand with you.” During a craft activity, she watched as the children scrawled messages on paper cutouts of their hands. One young Ukrainian girl wrote, “I want to return to my father.” Biden later told reporters the girl’s words were “heartbreaking.”

The first lady praised the Romanian government and relief organizations for the range of humanitarian aid they are providing to refugees. At the school, the first lady — herself a teacher — saw how teachers are helping some of the approximately 900,000 Ukrainians who have fled to Romania since Russia invaded Ukraine on Feb. 24.

“Really, in a lot of ways, the teachers are the glue that help these kids deal with their trauma and deal with the emotion and help give them a sense of normalcy,” Biden said. 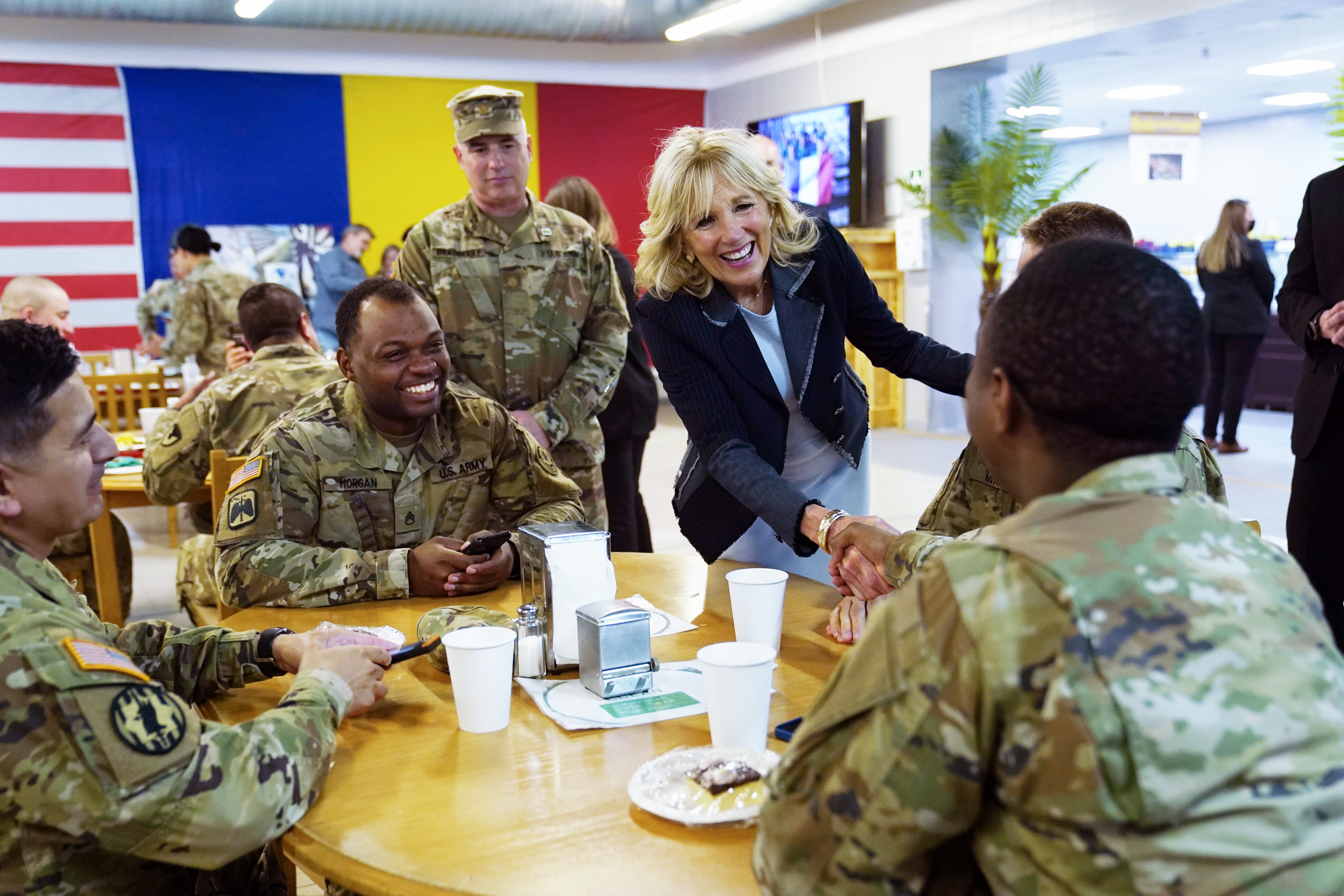 Jill Biden Visits Europe to Meet With Ukrainian Refugees, Thanks US Troops She added that she saw signs of hope for families who “felt that there was some structure to their lives and they were getting supplies. They all realized how much money the United States has been giving to Ukraine and to the refugee situation and to Romania to support the refugees.”

Most of the Ukrainians who have fled to Romania, mainly women and children, have moved on to other countries, but about 100,000 remain, officials said.

Earlier, Biden was briefed at the U.S. Embassy on the relief effort. Her visit to Eastern Europe comes as President Joe Biden is pressing Congress to pass an additional $33 billion in security and economic assistance for Ukraine.

Jill Biden called the show of solidarity “amazing" but also “just the beginning.” She said it was inspiring for Romanians “to welcome all these refugees into their homes and offer them food and clothing and shelter and give them their hearts.”

But she also cautioned that much more needs to be done by the U.S. and allies to assist Ukraine.

“We’re all hopeful, right,” she told reporters. “We wake up every morning and think ‘this has to end’ but it still keeps going on and on.”

About 7,000 Ukrainians cross the border and arrive in Romania daily, said Pablo Zapata, the Romanian representative for the U.N. refugee agency.

The United Nations, other agencies and the Romanian government are assisting refugees with food, shelter, education, health and mental health care, and counseling, among other services.

Biden asked specifically about the provision of mental health services and whether summer school was available to help refugee students catch up on their education. She said later that “the whole world is seeing that we need more mental health” assistance for the children and their parents.

The first lady is on the second day of a four-day trip to Romania and Slovakia, which shares a border with Ukraine, that is designed to showcase U.S. support for the refugees. Biden was scheduled to spend Sunday, Mother's Day, meeting with refugees in Slovakia and visiting a border village.

Biden had lunch with Romania's first lady, Carmen Iohannis, at her private residence. Iohannis, who accompanied Biden during the school visit, kept her job as an English teacher when her husband took office, just like Biden kept hers teaching at a Virginia community college.

The emotional thread to Biden's day continued after she arrived in Slovakia's capital. At her first stop, she left flowers at a memorial dedicated to Jan Kuciak, a 26-year-old investigative journalist, and his fiancee, who were assassinated in 2018. The case triggered a political crisis and brought down the country's government.