In GOP Embrace of Truckers, Accusations of Double Standard From Both Sides

Former President Donald Trump, who repeatedly called Black Lives Matter protesters “thugs” and “anarchists,” said there's “a lot of respect” for the overwhelmingly white truckers who blocked streets in the Canadian capital and shut down border crossings with the U.S. to oppose COVID-19 restrictions.

To Republican Sen. Ted Cruz, the truckers who parked bumper to bumper are “heroes” fighting for a righteous cause. Fox News Channel’s Sean Hannity sent “solidarity, love and support” to the drivers, who also defied police orders to clear Ottawa’s streets and ignored a court order forbidding them from blaring their horns. GOP Sen. Rand Paul encouraged them to head south and “clog” streets in the U.S.

The embrace of the truckers by some of the nation's most prominent conservative voices has drawn new accusations of hypocrisy and allegations that GOP leaders apply a racist double standard to large protests, including the Jan. 6 insurrection at the U.S. Capitol involving a mostly white crowd of Trump supporters.

Earlier this month, the Republican National Committee called the Jan. 6 attack “legitimate political discourse.” But only months before the insurrection, Trump, Cruz and other conservatives excoriated protests against police brutality and racial injustice that were largely peaceful, with some instances of looting and unrest.

“This shows again that there is just an unequal right to express dissent in the United States,” said Karen Pita Loor, a professor at Boston University’s School of Law. She called conservatives' support “two-faced,” saying that conservatives appear to support a white, conservative rights movement, but "when you have Black Lives Matter protesters on the street that are ‘thugs,’ they scare you."

Conservatives counter that there’s a double standard on the other side — that liberals support the idea of protesting until they disagree with the cause. 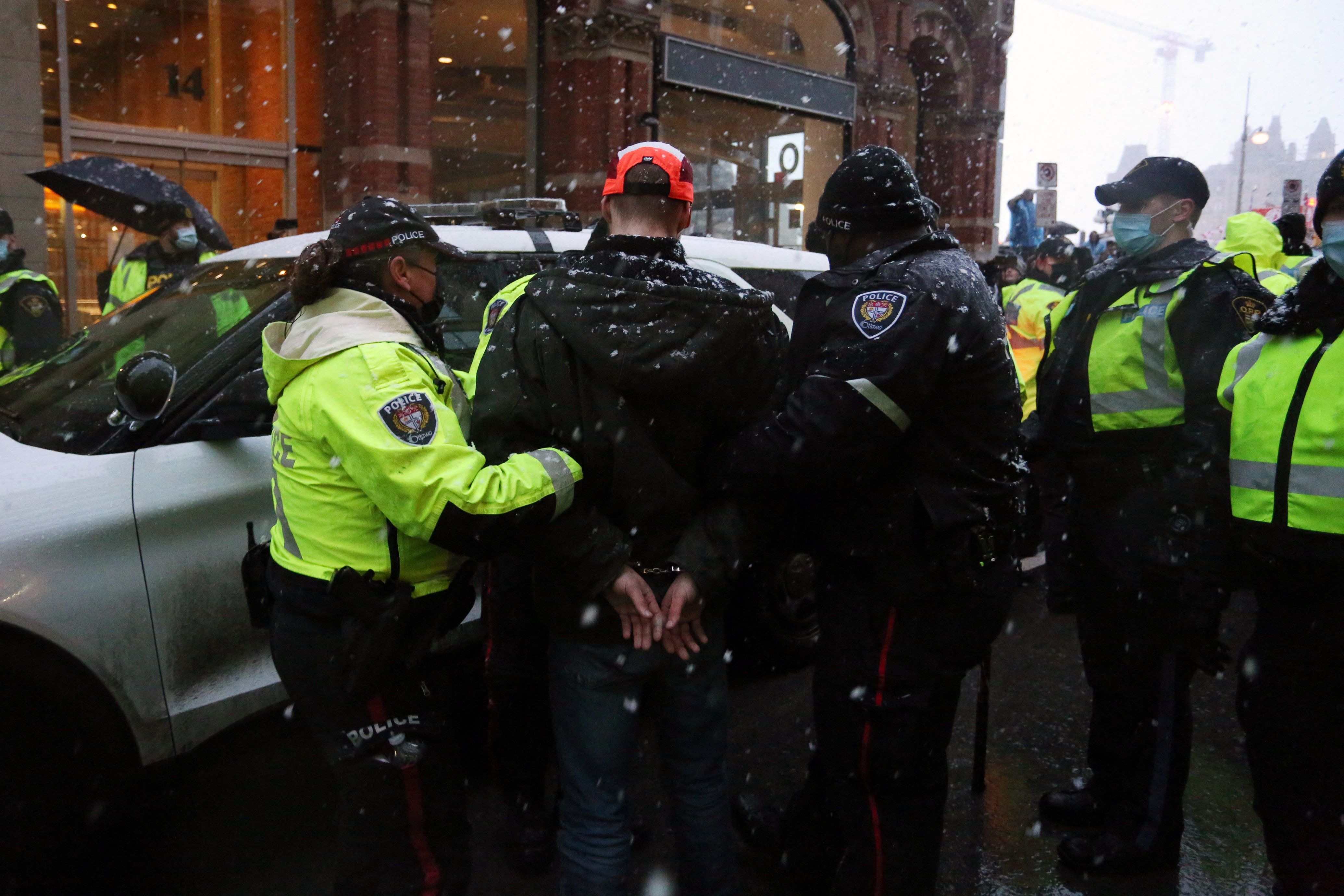 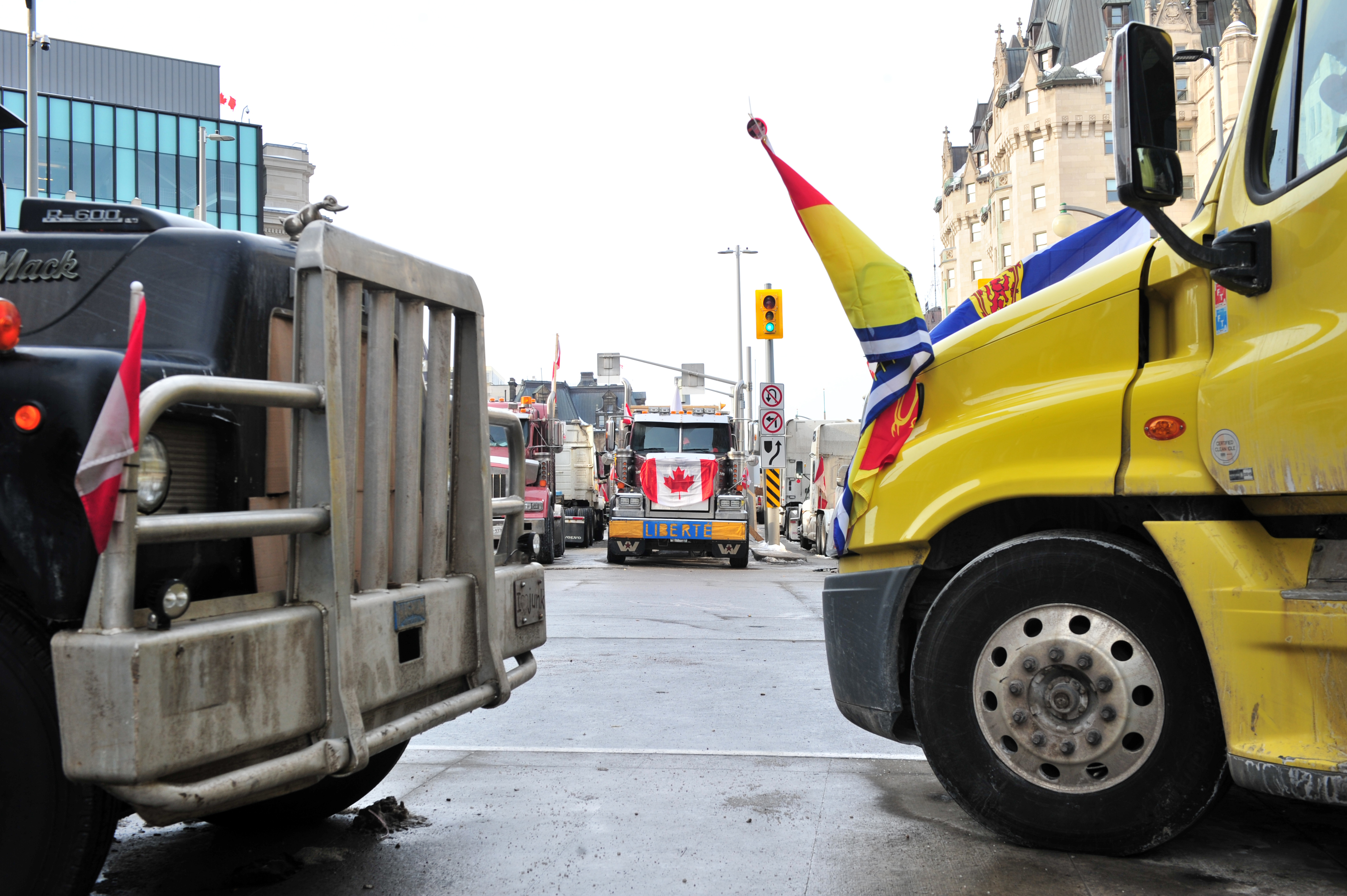 US Backers of Canada Protests Sent Funding North. Its Biggest Impact May Be Back Home

The Canadian protests known as the Freedom Convoy were declared a national emergency and an illegal occupation of the capital. For weeks, the drivers blocked streets to oppose vaccine mandates for truckers in Canada and other pandemic restrictions. They also blocked U.S. border crossings, inflicting economic damage on both countries.

On Thursday, hundreds of truckers in Ottawa stood their ground as police poured in, threatening to break up the demonstration. Workers put up extra fences around government buildings, and officers began sealing off much of the downtown area to outsiders to prevent them from coming to the aid of the protesters.

Conservatives say there is a clear distinction between the Canadian protests and instances of violence during protests over the killing of George Floyd by a white officer in Minneapolis, including buildings set on fire in that city and Portland, Oregon.

“All Americans have the right to peacefully protest. But there’s a stark contrast between civil disobedience — which has been a time-honored tradition in our country — and burning down buildings, looting businesses, and violently attacking actual peaceful protesters and innocent bystanders,” Paul said. The Republican from Kentucky was surrounded and confronted in 2020 by people protesting the death of Breonna Taylor, a Black woman fatally shot by police.

A Cruz spokesperson echoed those comments, saying that the senator “has been very clear” about the right to nonviolent protest. “What people don’t have the right to do is assault another person, loot and firebomb buildings — those actions are not exercising a constitutional right no matter the circumstance.”

Hannity said this week that the difference between the Black Lives Matter protests and the truckers is that the demonstrations in Canada have been peaceful.

At the Alberta border town of Coutts, across from Montana, where a blockade disrupted trade for more than two weeks, police arrested 13 people and seized guns and ammunition earlier this week. Four men also face a charge of conspiracy alleging that they plotted to kill Royal Canadian Mounted Police officers.

The support from conservatives in the U.S. goes beyond the words of politicians. Right-wing activists who oppose pandemic mandates and Canada's liberal prime minister, Justin Trudeau, have also donated money to the demonstrations, hoping that the protests will help motivate American voters ahead of this year's midterm elections.

Mario Morrow, a Black political consultant who has served both GOP and Democratic governors in Michigan, called Republicans' support for the Canadian protests “hypocrisy at its highest level.”

The protests included a blockade of the Ambassador Bridge, which connects Detroit and Windsor, Canada, and carries 25% of all trade between the two countries. The demonstrations also forced the shutdown of a Canadian Ford plant last week. Shortages due to the blockade forced General Motors to cancel a shift last week at its midsize-SUV factory near Lansing, Michigan.

Police broke the blockade at the bridge — the border's busiest and most important crossing — last weekend, arresting dozens of demonstrators.

“There is no way that the supporters, especially Republicans, can justify the funding support, the moral support and the political statements they are making by supporting these tactics," Morrow said. He also said the protesters would not get the same support if they were "anything other than conservative white individuals."

“They would have been locked up — day one,” he said.

Cruz last week praised the truckers for standing up against liberals who imposed mandates they “have no right to impose.” He said the protesters spoke not just for Canadians, but also for Americans.

“I think it is powerful to watch,” he said.