NEW YORK - With Barack Obama ahead of John McCain in recent national polls, some observers wonder if he could meet the same fate as Al Gore in 2000, when he won the popular vote but lost the presidency to George W. Bush.

Gore lost because Bush won a majority of the electoral votes, which are allocated to the winner of the popular vote in each state. Gore took the national vote because he received an excess of support in California, New York and other large, heavily Democratic states.

NBC News Political Director Chuck Todd said this type of “split result” is unlikely this year, but he observed that the McCain camp may be banking on it anyway.

“The McCain folks realize their only path now is an Electoral College path,” Todd said. “It’s very hard for him to win the popular vote.” 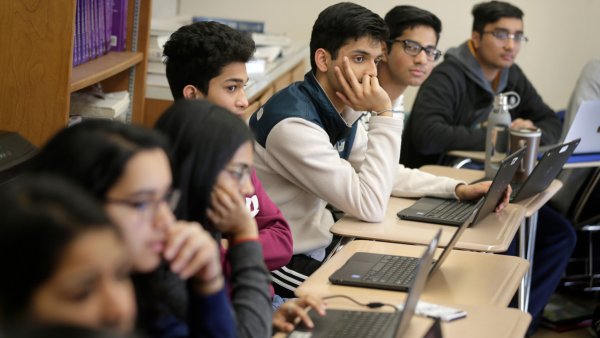 Clamorous Students in Rhode Island Participate in Government — by Suing It

Obama’s lead in recent polls is 7.2 percentage points, according to Pollster.com’s running average. And RealClearPolitics gives the Democratic candidate a 7.3 point lead in its recent average of national polls.

According to Todd, McCain may not be able to overcome this gap because Obama is saturating the airwaves with ads. These television spots should help Obama run up decent vote numbers — even in states he is likely to lose.

The Democratic candidate is also is likely to win big in populous states like California and Illinois, padding his vote total even further.

At the same time, Todd said, McCain could still win the presidency by squeaking by in just enough states to get the 270 votes needed to snag an Electoral College victory.

“You throw all that together and it is conceivable that Obama wins the popular vote by three or four million and he loses the Electoral College,” Todd said, adding: “I don’t think it is a big chance.”

Not the first time
If there is a split result this year, it would be just the fifth time in U.S. history that the candidate receiving a plurality of the popular vote did not become president. Previous instances include the elections of 1824, 1876, 1888, and of course 2000.

The 2004 presidential election almost had a similar outcome. Bush defeated John Kerry by more than three million votes in that contest, and he won the Electoral College, 286-252. But if just 100,000 Bush voters in Ohio had chosen Kerry instead, then the Democrat would have won the state and the election despite losing the popular vote.

Nate Silver, founder of the electoral projections Web site fivethirtyeight.com, puts the odds of Obama losing a split result at less than one percent this year.

Silver actually projects that McCain, not Obama, has a better chance of winning the popular vote but losing the Electoral College. He puts the odds of that happening at around 1.25 percent.

“The rationale behind that is basically that Obama has so many states in which he is playing offense he has a lot more paths to victory,” Silver said. “McCain really has to sweep all the swing states, whereas Obama …between Ohio and Florida and Virginia and Colorado and all these states, he can lose five out of six or six out of seven and still win.”

Silver said that reliably Republican states, like Oklahoma and Idaho, tend to vote for their candidates by larger margins than do Democratic states.

“Where the country is red it tends to be really red,” he said, which could help McCain's raw vote total.

'Very hard mathematically'
Silver, who first gained recognition forecasting the performance of baseball players, said his models suggest that a one-point advantage in the popular vote translates to a 70 percent chance of winning the Electoral College. At two points, the odds of winning the electoral college are 90 percent, and at three points, 95 or 97 percent.

“If you get more than a two or three point gap, it is very hard mathematically to have split result. That remains the case by and large in this election,” he said.

The National Journal’s Mark Blumenthal, a former Democratic consultant and founder of Pollster.com, said that McCain would have to make up a lot of ground in national polling to allow for a split result.

“It would take a pretty significant narrowing of the lead nationally or the polls being massively wrong,” he said.

Blumenthal said it is unlikely that McCain could close the gap in a handful of swing states and win the Electoral College without also moving national polls.

“The idea that somehow you can focus on six states and only move them while the rest of the nation stays frozen – that’s not very realistic,” he said. “All of this is sort of interesting, and we talk about it like it is moving pieces on a chessboard, but the reality is, and this is my main point, if the national margin doesn’t close, none of that is going to happen.”