Biden Transition Gets Govt OK After Trump Out of Options

The federal government recognized President-elect Joe Biden as the “apparent winner” of the Nov. 3 election on Monday, formally starting the transition of power after President Donald Trump spent weeks testing the boundaries of American democracy. He relented after suffering yet more legal and procedural defeats in his seemingly futile effort to overturn the election with baseless claims of fraud.

Trump still refused to concede and vowed to continue to fight in court after General Services Administrator Emily Murphy gave the green light for Biden to coordinate with federal agencies ahead of his Jan. 20 inauguration. But Trump did tweet that he was directing his team to cooperate on the transition.

Monday’s fast-moving series of events seemed to let much of the air out of Trump’s frantic efforts to undermine the will of the people in what has amounted to a weekslong stress test for American democracy. But Trump’s attempts to foment a crisis of confidence in the political system and the fairness of U.S. elections haven’t ended and are likely to persist well beyond his lame-duck presidency.

She acted after Michigan on Monday certified Biden’s victory in the battleground state, and a federal judge in Pennsylvania tossed a Trump campaign lawsuit on Saturday seeking to prevent certification in that state.

President-elect Joe Biden nominated former chair of the Federal Reserve, Janet Yellen, to be Secretary of the Treasury. Here are five things to know about Yellen.

It also comes as an increasing number of Republicans were publicly acknowledging Biden’s victory, after weeks of tolerating Trump’s baseless claims of fraud. The president had grown increasingly frustrated with the flailing tactics of his legal team.

In recent days, senior Trump aides including chief of staff Mark Meadows and White House counsel Pat Cipollone had also encouraged him to allow the transition to begin, telling the president he didn’t need to concede but could no longer justify withholding support to the Biden transition.

Yohannes Abraham, executive director of the Biden transition, said the decision “is a needed step to begin tackling the challenges facing our nation, including getting the pandemic under control and our economy back on track.”

President-elect Joe Biden has tapped a former deputy director of the CIA to be director of national intelligence. Here are five things to know about Avril Haines.

Murphy, a Trump appointee, has faced bipartisan criticism for failing to begin the transition process sooner, preventing Biden’s team from working with career agency officials on plans for his administration. The delay denied Biden access to highly classified national security briefings and hindered his team's ability to begin drawing up its own plans to respond to the raging coronavirus pandemic.

Murphy insisted she acted on her own.

“Please know that I came to my decision independently, based on the law and available facts. I was never directly or indirectly pressured by any Executive Branch official—including those who work at the White House or GSA—with regard to the substance or timing of my decision,” she wrote in a letter to Biden.

Trump tweeted moments after Murphy's decision: “We will keep up the good fight and I believe we will prevail! Nevertheless, in the best interest of our Country, I am recommending that Emily and her team do what needs to be done with regard to initial protocols, and have told my team to do the same.”

Max Stier, president and CEO of the nonpartisan Partnership for Public Service, criticized the delay but said Biden’s team would be able to overcome it.

“Unfortunately, every day lost to the delayed ascertainment was a missed opportunity for the outgoing administration to help President-elect Joe Biden prepare to meet our country’s greatest challenges," he said. "The good news is that the president-elect and his team are the most prepared and best equipped of any incoming administration in recent memory.”

President-elect Joe Biden is expected to nominate Linda Thomas-Greenfield as U.S. Ambassador to the United Nations. Here are five things to know about the career diplomat.

Senate Democratic leader Chuck Schumer said the GSA action “is probably the closest thing to a concession that President Trump could issue.″ Noting that the nation “faces multiple crises that demand an orderly transition,″ Schumer urged Democrats and Republicans to “unite together for a smooth and peaceful transition that will benefit America.″

Murphy’s action came just 90 minutes after Michigan election officials certified Biden’s 154,000-vote victory in the state. The Board of State Canvassers, which has two Republicans and two Democrats, confirmed the results on a 3-0 vote with one GOP abstention. Trump and his allies had hoped to block the vote to allow time for an audit of ballots in Wayne County, where Trump has claimed without evidence that he was the victim of fraud. Biden crushed the president by more than 330,000 votes there.

Some Trump allies had expressed hope that state lawmakers could intervene in selecting Republican electors in states that do not certify. That long-shot bid is no longer possible in Michigan. 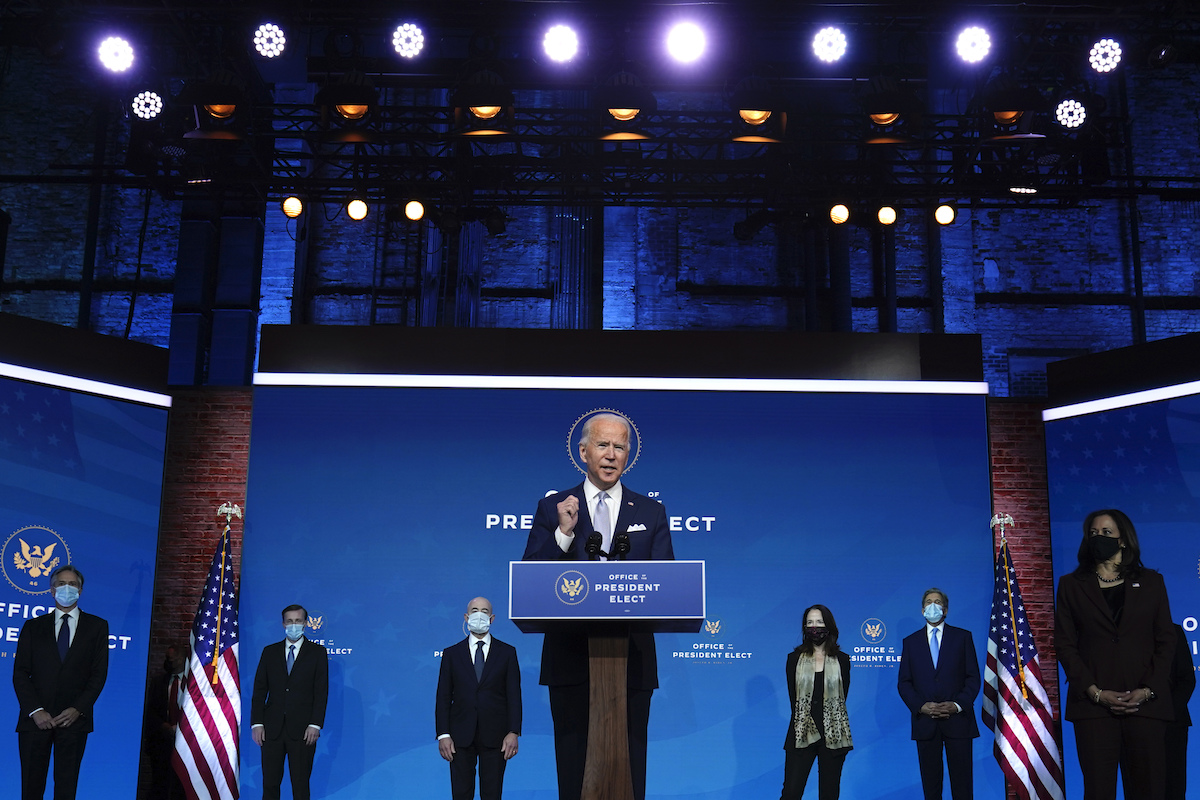 ‘America Is Back': Biden Pushes Past Trump Era With Nominees 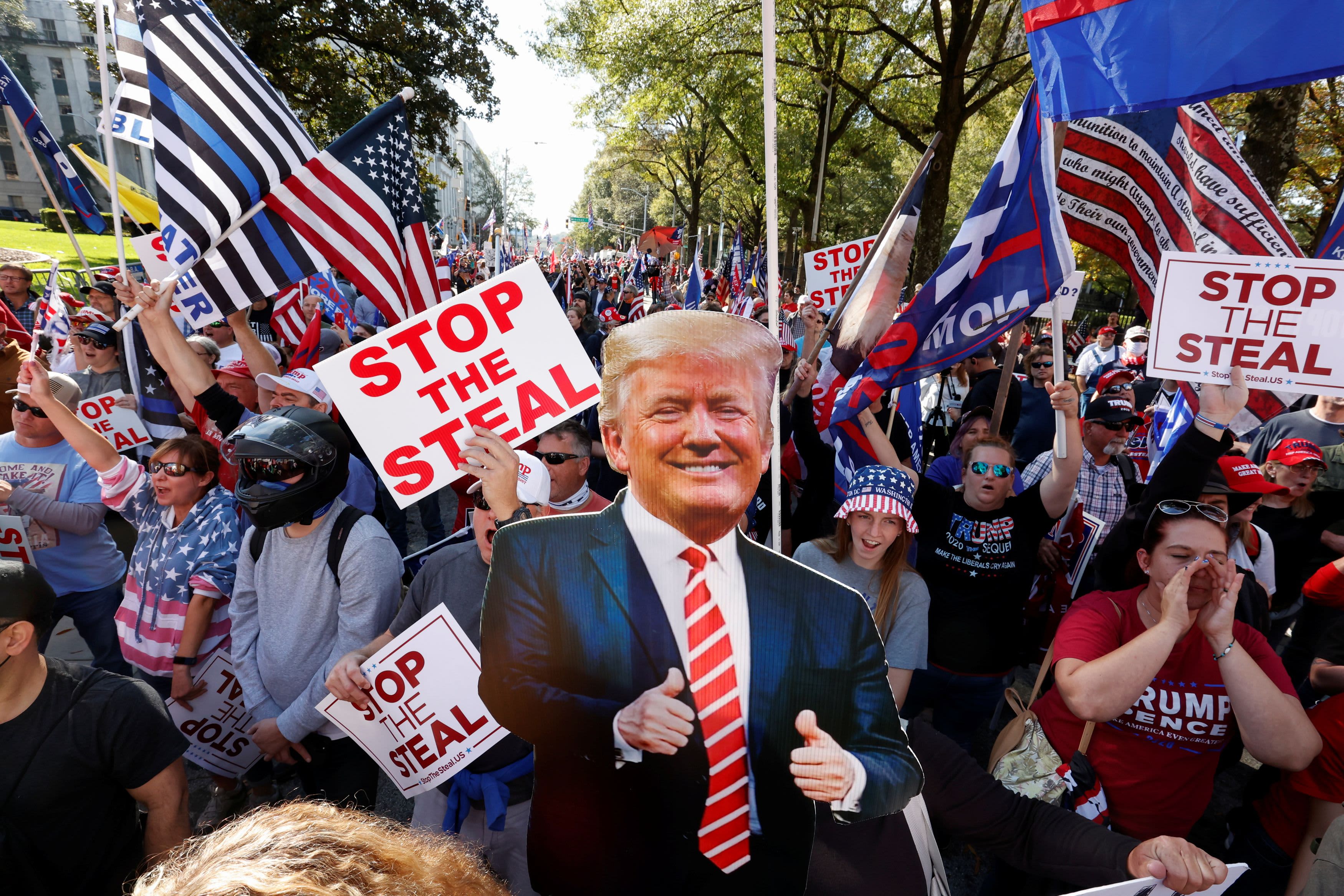 “The people of Michigan have spoken. President-elect Biden won the State of Michigan by more than 154,000 votes, and he will be our next president on January 20th,” Michigan Gov. Gretchen Whitmer, a Democrat, said, adding it’s “time to put this election behind us.”

Trump was increasingly frustrated by his legal team, led by former New York City Mayor Rudy Giuliani, whose erratic public performances drew bipartisan mockery in recent weeks. Still, the legal challenges were expected to continue, as Trump seeks to keep his supporters on his side and keep his options open for opportuntities post-presidency.

In Pennsylvania on Saturday, a conservative Republican judge shot down the Trump campaign’s biggest legal effort in the state with a scathing ruling that questioned why he was supposed to disenfranchise 7 million voters with no evidence to back their claims and an inept legal argument at best.

President-elect Joe Biden has selected Antony Blinken to be his nominee for secretary of state.

But the lawyers still hope to block the state’s certification, quickly appealing to the 3rd U.S. Circuit Court of Appeals in Philadelphia, which ordered lawyers to file a brief Monday but did not agree to hear oral arguments.

The campaign, in its filings, asked for urgent consideration so it could challenge the state election results before they are certified next month. If not, they will seek to decertify them, the filings said.

Pennsylvania county election boards voted Monday, the state deadline, on whether to certify election results to the Department of State. The boards in two populous counties split along party lines, with majority Democrats in both places voting to certify. After all counties have sent certified results to Secretary of State Kathy Boockvar, she must then tabulate, compute and canvass votes for all races. The law requires her to perform that task quickly but does not set a specific deadline.

In Wisconsin, a recount in the state’s two largest liberal counties moved into its fourth day, with election officials in Milwaukee County complaining that Trump observers were slowing down the process with frequent challenges. Trump’s hope of reversing Biden’s victory there depends on disqualifying thousands of absentee ballots —- including the in-person absentee ballot cast by one of Trump’s own campaign attorneys in Dane County.