Abbott Rolls Back ‘Catastrophic' Truck Inspections at One Crossing, Others Will Continue

Texas DPS checks of all commercial vehicles coming through other Mexican states will continue, Abbott said; the Texas Commissioner of Agriculture has called on the governor to end the policy, calling it 'catastrophic'

Texas Gov. Greg Abbott says he's directing the Texas Department of Public Safety to immediately suspend mandatory checks of all commercial vehicles crossing the Texas-Mexico border at Nuevo León upon an agreement with the governor of that state to enhance security on the southern side of the border that will curtail trafficking.

Abbott said the DPS will continue mandatory inspections of all commercial vehicle traffic entering the state at more than two dozen other international crossings until he has similar assurances of security from the governors of those Mexican states.

Abbott admitted Wednesday the policy he implemented last week led to long delays at the border and said the DPS could suspend the checkpoints on vehicles coming through the state of Nuevo León after striking an agreement with Gov. Samuel Alejandro García Sepúlveda to create checkpoints on the Mexican side of the border.

"Border bridges have become clogged because of a policy by Texas to thoroughly inspect vehicles coming from Mexico," Abbott said. "Gov. Garcia has begun and will continue enhanced border security enforcement measures on the Nuevo León side of the border … to prevent illegal immigration from Nuevo León into Texas."

The border between Texas and Nuevo León is about nine miles long and has one crossing at the Laredo-Colombia Solidarity International Bridge.

The most dramatic backups of commercial trucks along Texas' 1,200-mile border have occurred at other international bridges that do not share the border with Nuevo León.

Abbott hoped to reach similar agreements with the governors of other Mexican states but said until then the Texas DPS would continue to thoroughly inspect vehicles crossing from those locations.

"Now listen, I understand the concerns that businesses have trying to move products across the border. But I also know well the frustration of my fellow Texans and my fellow Americans caused by the Biden Administration not securing our border," Abbott said. "The ultimate way to end the clogged border is for President Biden to do his job and to secure the border."

Abbott then urged those frustrated by the gridlock at the border to call the president or their congressperson and show their support for the continuation of Title 42 expulsions which the Biden Administration has said would end May 23.

Abbott warned border sheriffs on Monday to start preparing now for the roughly 18,000 migrants expected to cross into Texas per day after Title 42 expires.

During Wednesday's news conference, Abbott said the DPS reported that 25% of the trucks inspected by state troopers were determined to be unsafe and pulled out of service due to mechanical issues such as bad brakes or poor tires. Abbott theorized removing those trucks from the roads may have saved the life of a Texan crossing the street.

Democrat Beto O'Rourke, who is challenging Abbott for governor this November, said Abbot's directive to search every commercial vehicle crossing the border is "job-killing, inflation-spiking chaos."

“Greg Abbott’s chaos at the border is crushing businesses, raising prices for Texans, causing supply chain delays, and hurting the economy of our state and this country. While the people of Texas — led by border communities — forced him to back down in Laredo, we will keep the pressure on to end his job-killing, inflation-spiking chaos at every other Texas port of entry,” O'Rourke said.

Texas Democrats released a statement Wednesday afternoon saying the governor's order to inspect every commercial vehicle intentionally slowed down trade, resulted in losses of $30 million in goods, and is unnecessarily adding to inflation.

Since Monday, Mexican truckers have blocked the Pharr-Reynosa International Bridge in protest after Abbott last week directed state troopers to stop and inspect trucks coming into Texas. Unusually long backups — some lasting 12 hours or longer — have stacked up elsewhere along Texas’ border.

Frustration spread within members of Abbott’s own party: Texas Agriculture Commissioner Sid Miller, a Republican, called on the governor to cease his commercial truck inspection project, calling it a "catastrophic policy which has now led to Mexican truckers blockading the border" and is forcing some trucks to reroute hundreds of miles to Arizona.

“You cannot solve a border crisis by creating another crisis at the border. These Level 1 inspections serve as a ‘clog in the drain’ and divert commerce and jobs to more western ports of entry," Miller said in a statement. "This is not solving the border problem, it is increasing the cost of food and adding to supply chain shortages. Such a misguided program is going to quickly lead to $2 lemons, $5 avocados, and worse."

Not even a week into the inspections, the Mexican government said Tuesday that Abbott’s order was causing “serious damage” to trade and that cross-border traffic had plummeted to a third of normal levels.

In a statement Wednesday, White House Press Secretary Jen Psaki said Abbott's border delays were disrupting the supply chain and raising prices for families in Texas and around the United States.

"Gov. Abbott's unnecessary and redundant inspections of trucks transiting ports of entry between Texas and Mexico are causing significant disruptions to the food and automobile supply chains, delaying manufacturing, impacting jobs, and raising prices for families in Texas and across the country," Psaki said. "Local businesses and trade associations are calling on Gov. Abbott to reverse this decision because trucks are facing lengthy delays exceeding five hours at some border crossings and commercial traffic has dropped by as much as 60%. The continuous flow of legitimate trade and travel and CBP's ability to do its job should not be obstructed. Gov. Abbott's actions are impacting people's jobs and the livelihoods of hardworking American families." 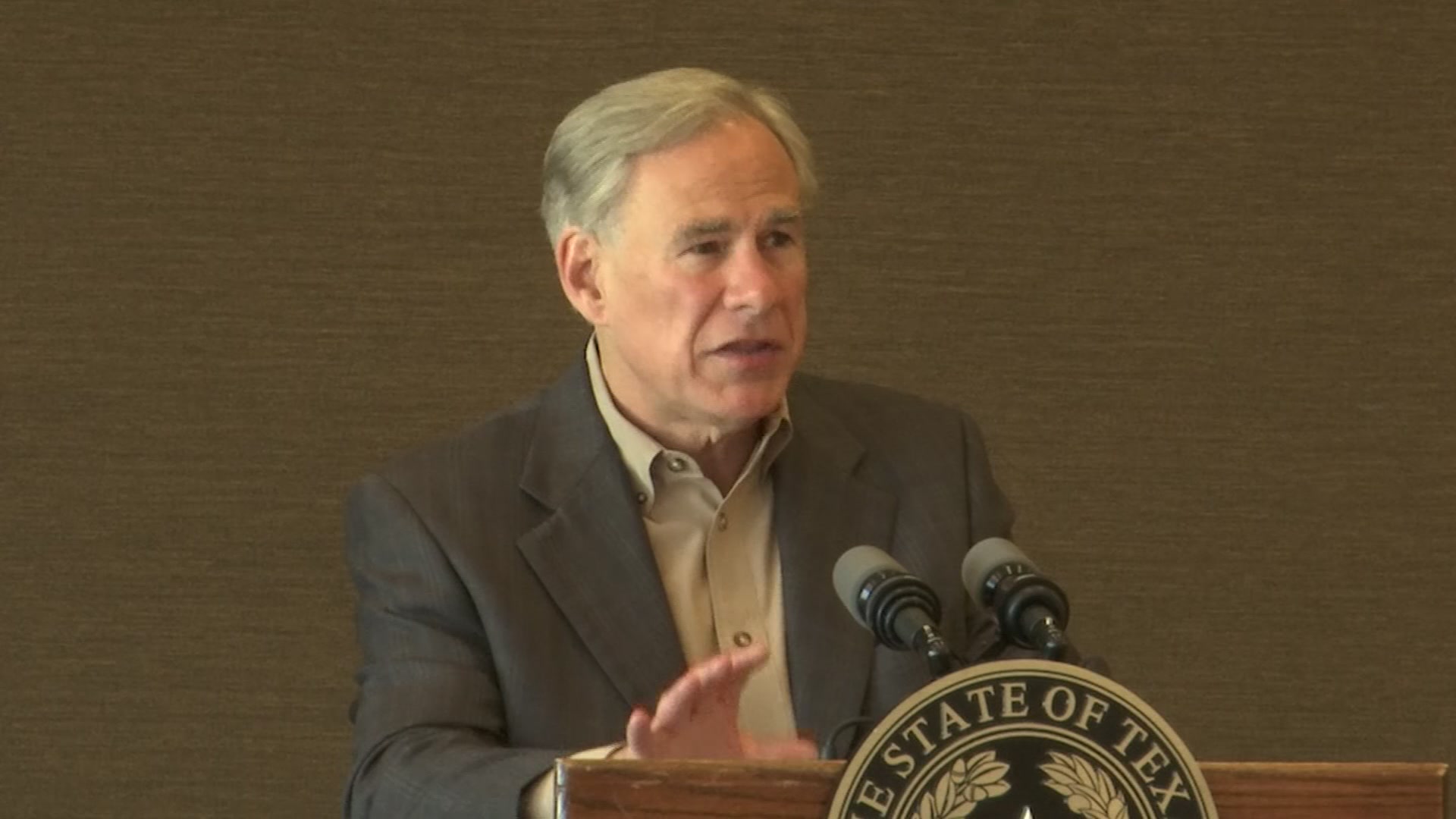 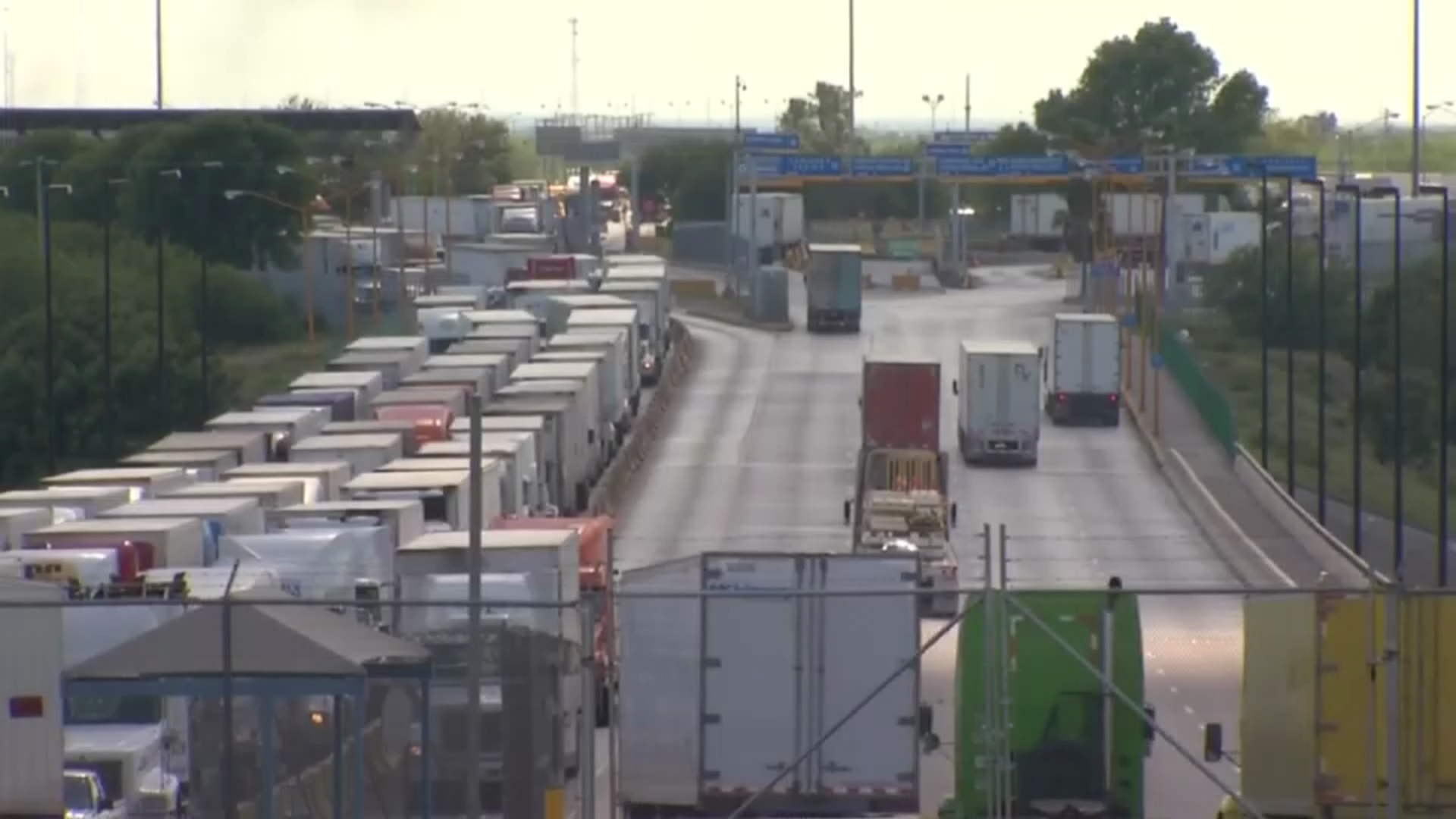 The gridlock is the fallout of an initiative that Abbott said is needed to curb human trafficking and the flow of drugs. But critics question how the inspections are meeting that objective, while business owners and experts complain of financial losses and warn U.S. grocery shoppers could notice shortages as soon as this week.

“I do describe it as a crisis because this is not the normal way of doing business,” said Hidalgo County Judge Richard Cortez, whose county includes the bridge in Pharr. “You’re talking about billions of dollars. When you stop that process, I mean, there are many, many, many, many people that are affected.”

The shutdowns and slowdowns have set off some of the widest backlashes to date of Abbott’s multibillion-dollar border operation, which the two-term governor has made the cornerstone of his administration. Texas already has thousands of state troopers and National Guard members on the border and has converted prisons into jails for migrants arrested on state trespassing charges.

Abbott warned last week that inspections would “dramatically slow” border traffic, but he hasn’t addressed the backups or port shutdowns since then. His office didn’t reply to a message asking for a comment Tuesday.

Texas Gov. Greg Abbott (R) says the state will begin enhanced vehicle inspections at the border and will send migrants to Washington D.C. on charter buses in response to the federal government ending Title 42 expulsions next month.

The disruptions at some of the world’s busiest international trade ports could pose economic and political threats to Abbott, who is seeking a third term in November. Democrat Beto O’Rourke, the former presidential candidate who is running against Abbott for governor, said during a stop in Pharr on Tuesday that the inspections were doing nothing to halt the flow of migrants and were worsening supply chain issues.

He was joined by Joe Arevalo, owner of Keystone Cold, a cold-storage warehouse on the border. He said that although Texas state troopers have always inspected some trucks crossing the border “they’ve never, ever, ever held up a complete system or a complete supply chain.”

An estimated 3,000 trucks cross the Pharr bridge on a normal day, according to the National Freight Transportation Chamber. The Pharr bridge is the largest land port for produce, such as leafy green vegetables, entering the U.S.

Mexico supplies about two-thirds of the produce sold in Texas.

“We’re living through a nightmare, and we’re already suffering through a very delicate supply chain from the pandemic and to try to regrow the business,” Arevalo said.

The additional inspections are conducted by the Texas Department of Public Safety, which said that as of Monday, it had inspected more than 3,400 commercial vehicles and placed more than 800 “out of service” for violations that included defective brakes, tires, and lighting. It made no mention of whether the truck inspections had turned up migrants or drugs.

The order’s impact quickly spread beyond Texas: U.S. Customs and Border Protection officials confirmed Tuesday that there was another blockade at the Mexican customs facility at the Santa Teresa port of entry in southern New Mexico, not far from El Paso. Those protests are misguided since New Mexico has nothing to do with Texas’ inspection policies, said Jerry Pacheco, executive director of the International Business Accelerator and president of the Border Industrial Association.

He said the protests were costing businesses millions of dollars a day.

“Everybody down here is on a just-in-time inventory system,” Pancheo said. “It’s going to affect all of us, all of us in the United States. Your car parts are going to be delivered late, your computer — if you ordered a Dell or HP tablet, those are going to be disrupted.”

Ed Anderson, a professor at the McCombs School of Business at the University of Texas at Austin, compared the disruptions to those caused by February’s trucker blockade in Canada that forced auto plants on both sides of the border to shut down or scale back production. During that protest, trucks looking for other entries to cross into the U.S. wound up causing congestion at other bridges, a scenario that Anderson said might now be repeated on the southern border.

Anderson said consumers would likely begin noticing the effects by the end of this week, if not sooner.