A man investigators believe drove a shooter to a Garland convenience store where three teenagers were shot and killed and another wounded on Sunday is now in custody after surrendering to police.

Richard Acosta, 33, was arrested Monday and charged with capital murder of multiple persons, Garland police said in a news release. His bond is set at $1,000,000.

In the video, a shirtless boy or man could be seen crouching while walking toward the store and carrying a handgun. He swings open the door and starts shooting into the store from the doorway.

Police said he fired more than 20 rounds from a .40-caliber pistol.

The victims were identified Monday by police as 14-year-old Xavier Gonzalez, 16-year-old Ivan Noyala and 17-year-old Rafael Garcia. A 15-year-old is recovering at a hospital.

The suspected shooter was wearing a baseball hat, blue surgical mask and dark-colored athletic shorts. Police said he got into a white Dodge Ram pickup with a scrape along much of the passenger side, which they allege was driven by Acosta.

Investigators believe that the shooting is in retaliation from a previous disturbance and that Sunday night's shooting was a targeted attack on at least one person inside the store.

Investigators said Tuesday that the truck seen in the surveillance video has also been located.

A 14-year-old taken into custody Monday has since been released to his family and is not facing charges, according to police spokesman Lt. Pedro Barineau. The teen "has intimate knowledge of the shooting, and he is cooperating with the investigation," police stated, noting the release was "based on new information in the investigation."

The teen, who was not named by police, remains a person of interest, Barineau said.

Police continue to investigate, and will release more information as it becomes available. 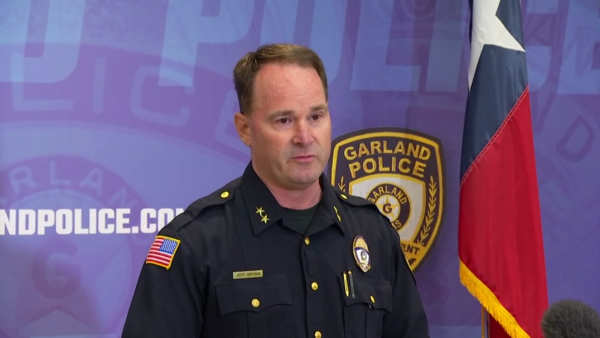 14-Year-Old In Custody in Shooting That Killed 3 at Garland Convenience Store: PD