Fans of the Netflix docuseries 'Tiger King' will have a new place to take a selfie, as long as they practice physical distancing.

A new mural featuring Joe Exotic and one of his cool cats is painted at Riverfont Boulevard and Cole Street in the Dallas Design District.

Joe Exotic, whose real name is Joe Maldonado-Passage, is currently being held at a Fort Worth Federal Medical Center.

The 57-year-old's husband Dillon Passage says Maldonado-Passage is in coronavirus quarantine after inmates at the Oklahoma jail where he was held prior to his transfer tests positive for COVID-19. 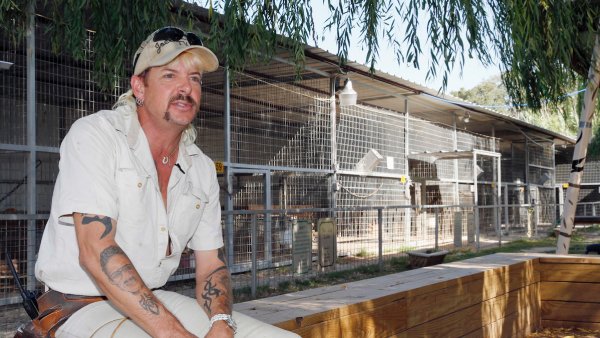 In April 2019, the former owner of GW's Exotic Animal Park in Wynnewood, Okla., was found guilty trying to hire someone to murder Carole Baskin, a prominent animal rights activist and the founder of Big Cat Rescue animal sanctuary in Tampa, Florida.

The mural in Dallas is based on a now-infamous photo of Joe Exotic and a big cat with a "Hey Tiger" banner below.

According to D Magazine it is one of five new murals along Riverfront Boulevard commissioned by Ewing Properties.