The court will hear two separate challenges to Texas' Senate Bill 8, which bans most abortions after six weeks

Texas Senate Bill 8, passed this year, bans abortions after cardiac activity is detected — which can be as early as six weeks after conception. There are exceptions for medical emergencies, but not in cases of rape and incest.

But rather than criminalizing abortion, the law incentivizes private citizens to sue anyone who helps a person get an abortion after six weeks of pregnancy.

Whole Women's Health and the Justice Department are challenging the law as unconstitutional. 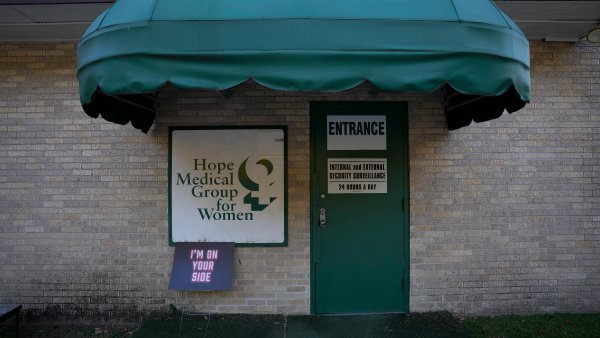 In neither case is the right to an abortion directly at issue. The motivation for the lawsuits filed by the abortion providers and the Biden administration is that the Texas law conflicts with landmark Supreme Court rulings that prevent a state from banning abortion early in pregnancy.

"The Texas law is meant to intimidate, to threaten, to make us afraid of providing the abortion care that people need," Amy Hagstrom Miller, founder of Whole Women's Health Clinic, told NBC.

The law has discouraged clinics from performing the procedure and its unusual enforcement scheme has made it harder for abortion rights groups to persuade courts to block its enforcement.

The Texas law has been in effect since September, except for a 48-hour period in early October when it was blocked by a lower court.

Former Democratic State Sen. Wendy Davis, who famously filibustered for 13 hours to block Republicans from passing an abortion law in 2013, discussed the makeup of the Supreme Court on "Lone Star Politics."

“The fact that they have agreed to take it up tomorrow on a very quick timeline leads me to have the tiniest ray of hope that they may be doing so that they can look at the structure of this law,” Davis said.

At least 12 other states have enacted bans early in pregnancy, but all have been blocked from going into effect.

But rather than have state officials enforce it, the Texas law deputizes private citizens to sue anyone who performs or aids and abets an abortion. If they're successful, they are entitled to at least $10,000. Women who obtain abortions can’t be sued under the law.

The structure of the law threatens abortion providers with huge financial penalties if they violate it. Clinics throughout the state have stopped performing abortions once cardiac activity is found.

The result, both the providers and the Biden administration said, is that women who are financially able have traveled to other states and those without the means must either continue their pregnancies against their will or find other, potentially dangerous ways to end them.

While the Supreme Court will hear the challenges Monday, it could be weeks or months before a ruling.