An ice storm in North Texas has knocked out power to nearly a quarter of a million homes and businesses Friday, canceled about 1,000 flights and contributed to a fatal wreck.

The winter storm warning issued until 6 p.m. Friday was cancelled early, but after several hours of light freezing rain resulted in ice accumulations of up to a half inch across the Meteroplex.

Though the precipitation has ended, temperatures are forecast to stay below freezing into Sunday, meaning residents will have to contend with icy roads through the weekend.

Early Friday morning, Oncor reported as many as 268,000 customers without power across North Texas.   At 9:30 p.m., that number had dropped to about 164,000.  Oncor warns it may take more than 24 hours to restore power to all customers.

Customers can report and monitor outages at stormcenter.oncor.com.  Additionally, phone and power outages can be reported to Oncor by texting the word OUT to 66267 (ONCOR).

DFW International Airport said Friday that they expect more than 4,000 travelers to spend the night in airport terminals, due to weather-related flight cancellations. American Airlines and American Eagle canceled about 1,400 flights system-wide Friday due to bad weather in Texas. Airlines at DFW canceled 750 flights, or 90 percent of the normal daily load. At Dallas Love Field, Delta, United and Seaport Airlines canceled all flights until noon. Dallas-based Southwest Airlines tweeted it had more than 50 cancellations Friday.

The airport continues to struggle with de-icing entrance ramps into the airport. Airport officials urge travelers to check the status of their flight with their airline before heading out to the airport.

Many Schools Closed Friday, Many Events Canceled or Postponed

Dallas and Fort Worth school districts led a list of North Texas school systems, colleges and universities that canceled their Friday classes.

Sunday's MetroPCS Dallas Marathon has been canceled with organizers citing the "safety of our participants, as well as our volunteers and spectators." The race draws thousands of runners from inside and outside North Texas. The race's health and fitness expo was also canceled.

In the livestream video player above, watch a live feed from NBC 5's camera near Klyde Warren Park in Dallas. The shot looks northeast along Woodall Rodgers Freeway toward Central Expressway.

Due to a thick layer of ice covering most bridges and overpasses in the Metroplex, North Texans are encouraged to drive only when absolutely necessary. 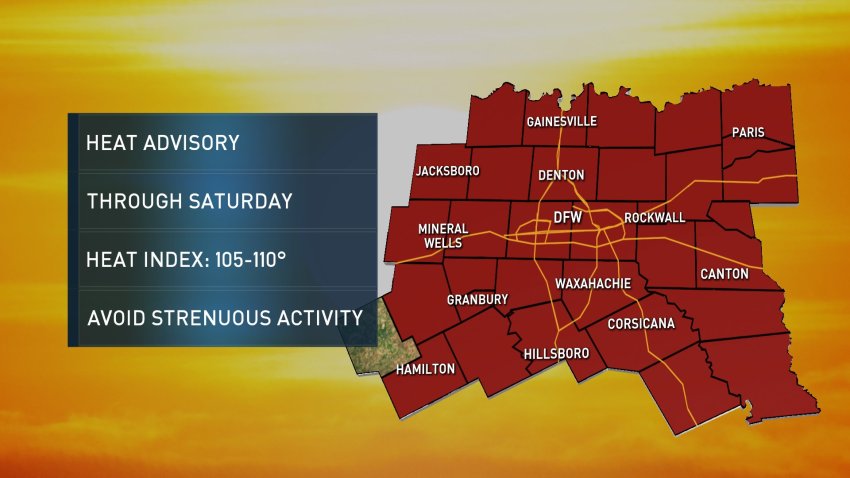 The Fort Worth Police Department reported responding to approximately 240 accidents from midnight to 4:30 p.m. Friday.

Arlington police said a driver died Friday after his car hit a stopped truck on Interstate 20 near Cooper Street at around 12:15 a.m. Friday. Police said inclement weather appears to have been a factor in the crash that killed 29-year-old Chase Brandenburgh.

The Trinity Railway Express is also experiencing weather-related delays, according to DART trains are running between 35 and 60 minutes behind schedule.

Gov. Rick Perry issued an emergency proclamation, mobilizing state resources as many parts of the state brace for a severe winter storm.

His order activates a statewide emergency operations center. It also means 54 Texas Military Forces personnel and 20 supporting vehicles were standing by in Wichita Falls and Sherman to help rescue any stranded motorists.

Texans may call 2-1-1 for winter weather related resources, such as information regarding Warming Centers where individuals may seek daytime shelter from the cold. Relay services and cell phone users who have out-of-state area codes can access 2-1-1 in Texas by dialing 1-877-541-7905.

Residents Prepare for the Worst

In the Dallas area, agencies and residents are still haunted by the fiasco of a frozen Super Bowl week two years ago, when an inadequate response to a winter storm crippled the region and left visitors stranded on impassable highways.

At a Dallas Home Depot, manager James Mulberry said the store was already running out of firewood and ice melt on Thursday afternoon, as freezing rain and wind began hitting the region. Residents were preparing for a storm that threatened to slick en highways, freeze power lines -- and leave them stranded through the weekend.

"It's almost like a Black Friday," Mulberry said, "but I guess we'll call it an Ice Friday."

Debbie Jones was at a supermarket collecting the ingredients for a warm winter meal in advance of Friday.

"I'm going to make a gumbo, then try and lay it in for tomorrow," Jones said.