The aid is expected to be available retroactive to Sunday, Aug. 23, the day it was requested by Texas Gov. Greg Abbott (R).

Trump's action authorizes FEMA to coordinate all disaster relief efforts and to provide appropriate assistance for required emergency measures to save lives, to protect property, public health and safety, and to lessen or avert the threat of a catastrophe. 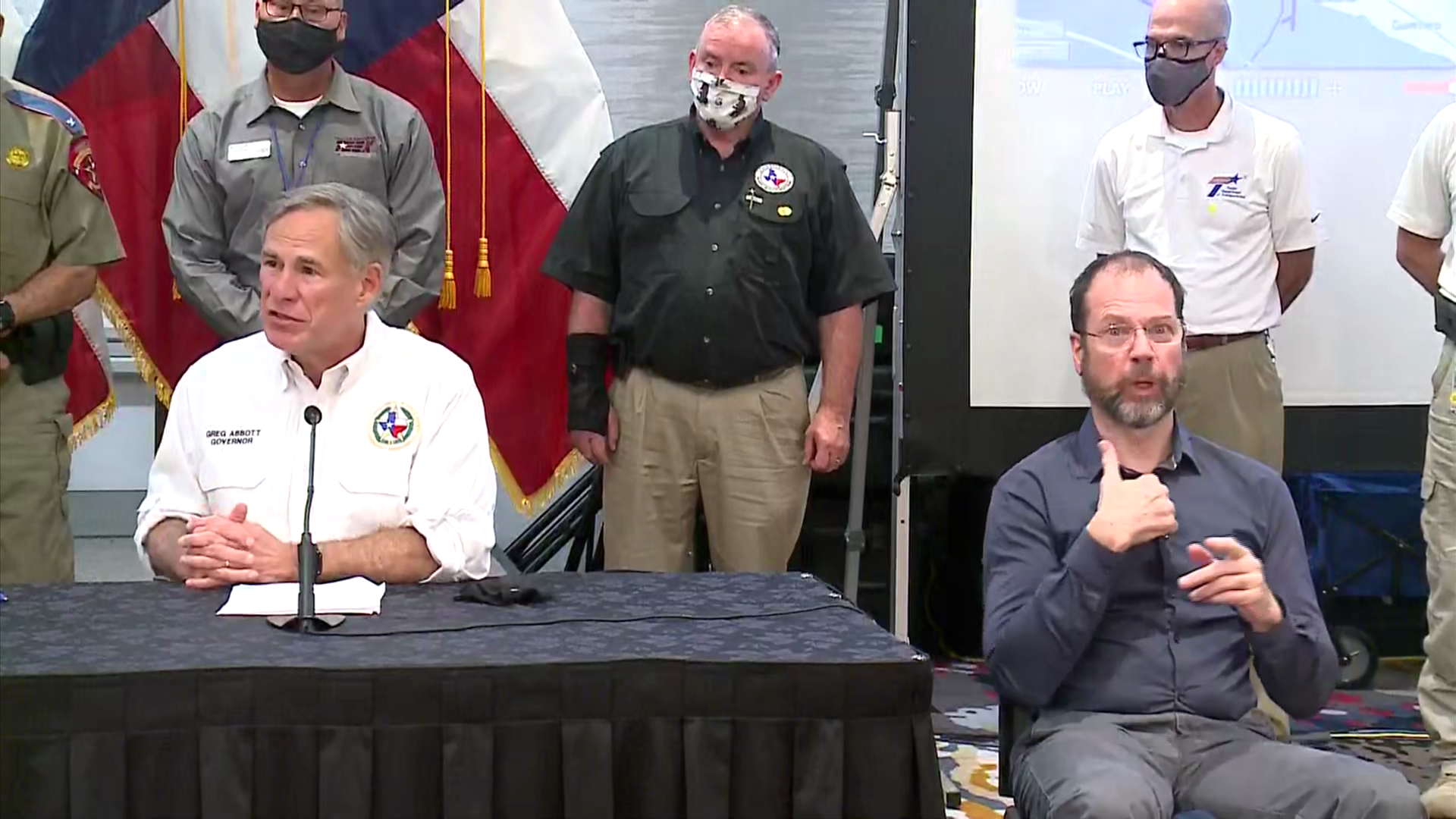 "Specifically, FEMA is authorized to identify, mobilize, and provide at its discretion, equipment and resources necessary to alleviate the impacts of the emergency," the agency said in a news release Monday.

Emergency protective measures (Category B), limited to direct federal assistance and reimbursement for mass care including evacuation and shelter support, will be provided at 75% federal funding.

Locally, NBC 5's team of weather experts say there is a chance North Texas may see some rain from Laura once the storm makes landfall. Get the latest forecast here.

Marco Collapses, Sets Stage for Laura to Hit US as Powerful Hurricane

Tropical Storm Marco began falling apart Monday, easing one threat to the Gulf Coast but setting the stage for the arrival of Laura as a potentially supercharged Category 3 hurricane with winds topping 110 mph and a storm surge that could swamp entire towns.

The two-storm combination could bring a history-making onslaught of wind and coastal flooding from Texas to Alabama, all complicated by the coronavirus pandemic, forecasters said.

Laura, declared a hurricane Tuesday morning, churned just south of Cuba after killing at least 11 people in the Dominican Republic and Haiti, where it knocked out power and caused flooding in the two nations that share the island of Hispaniola. The deaths reportedly included a 10-year-old girl whose home was hit by a tree and a mother and young son who were crushed by a collapsing wall.

Laura was not expected to weaken over land before moving into warm, deep Gulf waters that forecasters said could bring rapid intensification.

"We're only going to dodge the bullet so many times. And the current forecast for Laura has it focused intently on Louisiana," Gov. John Bel Edwards told a news briefing.

Shrimp trawlers and fishing boats were tied up in a Louisiana harbor ahead of the storms. Red flags warned swimmers away from the pounding surf. Both in-person classes and virtual school sessions required because of the coronavirus pandemic were canceled in some districts.

A food bank that has been twice as busy as normal since March providing meals to people affected by the pandemic prepared to shut down for a few days because of the weather, but not before distributing a last round of provisions to the needy.

State emergencies were declared in Louisiana and Mississippi, and shelters were being opened with cots set farther apart, among other measures designed to curb infections.

"The virus is not concerned that we have hurricanes coming, and so it's not going to take any time off and neither can we," Edwards said.

Louisiana was trying to avoid opening state-run shelters because of the COVID-19 threat. The governor encouraged evacuees to stay with relatives or in hotels. But officials said they made virus-related preparations at state shelters in case they are needed.

As Marco collapsed, the National Hurricane Center canceled all tropical storm watches and warnings. Marco's winds died down to 40 mph as it sloshed 40 miles. southeast of the mouth of the Mississippi River.

By midday Monday, an airplane monitoring the system could only find a small area of wind strong enough to keep Marco a tropical storm, and those winds were not near the ragged center. Because strong crosswinds were decapitating the storm, Marco was expected to lose tropical storm designation late Monday, the hurricane center said.

While Marco weakened, Laura's potential got stronger, and forecasters raised the possibility of a major hurricane that would pummel western Louisiana and eastern Texas from late Wednesday into Thursday.

Once Laura passes Cuba, the system could quickly strengthen over warm water, which acts as fuel to supercharge the storm. Forecasters predicted winds of 105 mph before landfall, but some models showed an even stronger storm.

Together, the two storms could bring a total of 2 feet of rain to parts of Louisiana, perhaps raising the storm surge to more than 10 feet along the Louisiana coast and pushing water 30 miles up the rivers in a worst-case scenario, said meteorologist Benjamin Schott, who runs the National Weather Service office in Slidell, Louisiana. Some towns along lakes and rivers could be swamped.

The double punch comes just days before the Aug. 29 anniversary of Hurricane Katrina, which breached the levees in New Orleans, flattened much of the Mississippi coast and killed as many as 1,800 people.

August Creppel, chief of the United Houma Nation, was worried about the group's 17,000 members, spread out over six parishes along the Louisiana coast. He took part in a ceremony Saturday at the Superdome in New Orleans that included Native American singing and prayers to commemorate the hurricane's 15th anniversary.

"We know our people are going to get hit. We just don't know who yet," said Creppel, who has been in contact with the Red Cross to get supplies once the weather eases.

For the residents of the Louisiana coast, "they're certainly lucky that Marco is not worse than it is," said University of Miami hurricane researcher Brian McNoldy. "This will come and go, and they can get ready for Laura. That'll be the main attraction."

Meanwhile, Laura drenched much of Cuba as it headed northwest at 20 mph with top sustained winds of 60 mph.

On the Louisiana coast at Holly Beach in an area nicknamed the "Cajun Riviera," Eric Monceaux was frantically packing what he could take with him. Hit first by Hurricane Rita in 2005 and again by Ike in 2008, he does not plan to come back if Laura does its worse.

"That would be strike three," he said. "I'm 62, and I gave it two strikes. The third one is 'strike three, you're out' like a baseball game."

Closer to New Orleans In Belle Chasse, Chris Leopold stocked up on propane at a hardware store after a weekend spent getting ready for rough weather.

"You pick up everything off the ground, bring in what you can, tie down any boats you have, empty your refrigerator, cut the power, cut the water and say your prayers on the way out," he said.