Cellphone videos shared on social media show tornadoes and funnel clouds in counties east of Dallas-Fort Worth; no immediate reports of injuries

Storms Friday were forecast to be intense with the threat of damaging winds, hail and the possibility of tornadoes. NBC 5 Chief Meteorologist Rick Mitchell had warned for days that "all modes of severe weather" were possible as favorable conditions for storm development were expected ahead of a cold front.

Texas Gov. Greg Abbott put state resources on standby Thursday and directed the Texas Division of Emergency Management "to swiftly provide all necessary resources to protect our communities." The Texas A&M Forest Service said Friday night that its resources were sent to Northeast Texas to help with the storm response.

A Tornado Watch was issued early Friday afternoon and it wasn't long until the first warning was issued by the National Weather Service. The Tornado Watch expired for all of North Texas at 8 p.m. after storms moved east out of the area.

By the time storms rolled out, The National Weather Service said a record amount of rainfall -- 3.01 inches of rain -- was recorded at DFW Airport, breaking the previous record of 1.77 inches set in 1956.

Chasing the storms, NBC 5 crews headed east into Hopkins, Lamar and Henderson counties where there were active tornado warnings and reports of significant damage left behind by the storm.

A Sulphur Springs man said he and his wife were in their pickup when the bed suddenly raised up and seconds later a tree was laying on their hood.

"It happened so quick, a blink of an eye. A twinkling of an eye. Here and gone," David Talley said. "It was so quick you didn't have time to think."

Talley said the home he and his wife Mary have shared for 15 years appears to be a total loss. Talley added he wasn't too worried about it and had faith the Lord would take care of it.

"Just pray about it and the Lord will take care of everything," Talley said.

He said his wife was a little shaken up but the couple was otherwise unhurt aside from a few small scratches from flying glass.

"The Lord was with us, that's all I can tell you," Talley said.

Deputy Fire Marshal Rodney Caudle said after hitting the Talleys' home, the tornado continued across a pasture before hitting at least two other houses on FM 1180, off of Highway 19.

Caudle said he knew of no serious injuries.

Friday night, several homes in the area remained without power.

An NBC 5 viewer sent in video of what appears to be a tornado near Sulphur Springs Friday afternoon.

At least 10 people were hospitalized with injuries from the storm, including two people who were critically hurt but expected to recover, law enforcement officials said Friday night.

Lamar County Judge Brandon Bell has declared a disaster for the county. The damage assessment and cleanup are expected to take several days.

NBC 5's Rick Mitchell explains what he learned from watching a video taken during a fast-moving tornado in the Lamar County community of Powderly.

In the city of Midcity, located just south of the Red River and about 120 miles northeast of Dallas, neighbors say at least a dozen homes are either damaged or destroyed.

Buildings that took a direct hit were almost unrecognizable. Families say they hid in closets and bathrooms and prayed as the tornado passed. One girl said the closet where her family hid was the only part of the house where the roof didn't cave in.

Another neighbor said he rushed home from work to find only a bathroom still standing.

Craig Holcomb said he took cover with his wife in a bathtub after they looked outside and saw clouds swirling.

There are also reports of damage to homes in nearby Powderly and Caveness.

The Lamar County Office of Emergency Management is asking people to stay away from damaged areas.

People are packing up what they can to go stay somewhere safe. The Red Cross has opened a shelter at the Lamar Church of Christ for those who need a place to go:

The Lamar County Sheriff’s Office says, so far, there are no reported fatalities.

The National Weather Service will determine the strength of the tornado.

In the Lamar County city of Midcity neighbors say at least a dozen homes are either damaged or destroyed.

People in the Henderson County city of Athens are cleaning up the damage Friday night after taking a hard hit from the weather.

Volunteers moved in fast to help move furniture from one woman's home. She says the storm came crashing through her ceiling.

"Did sound like a train coming through, and it was over that quick. And since I'm the property manager, I just came around the property and saw all the damage," said Cecil Ragan.

Down the street, Linda Sifford's brother's house has serious damage. 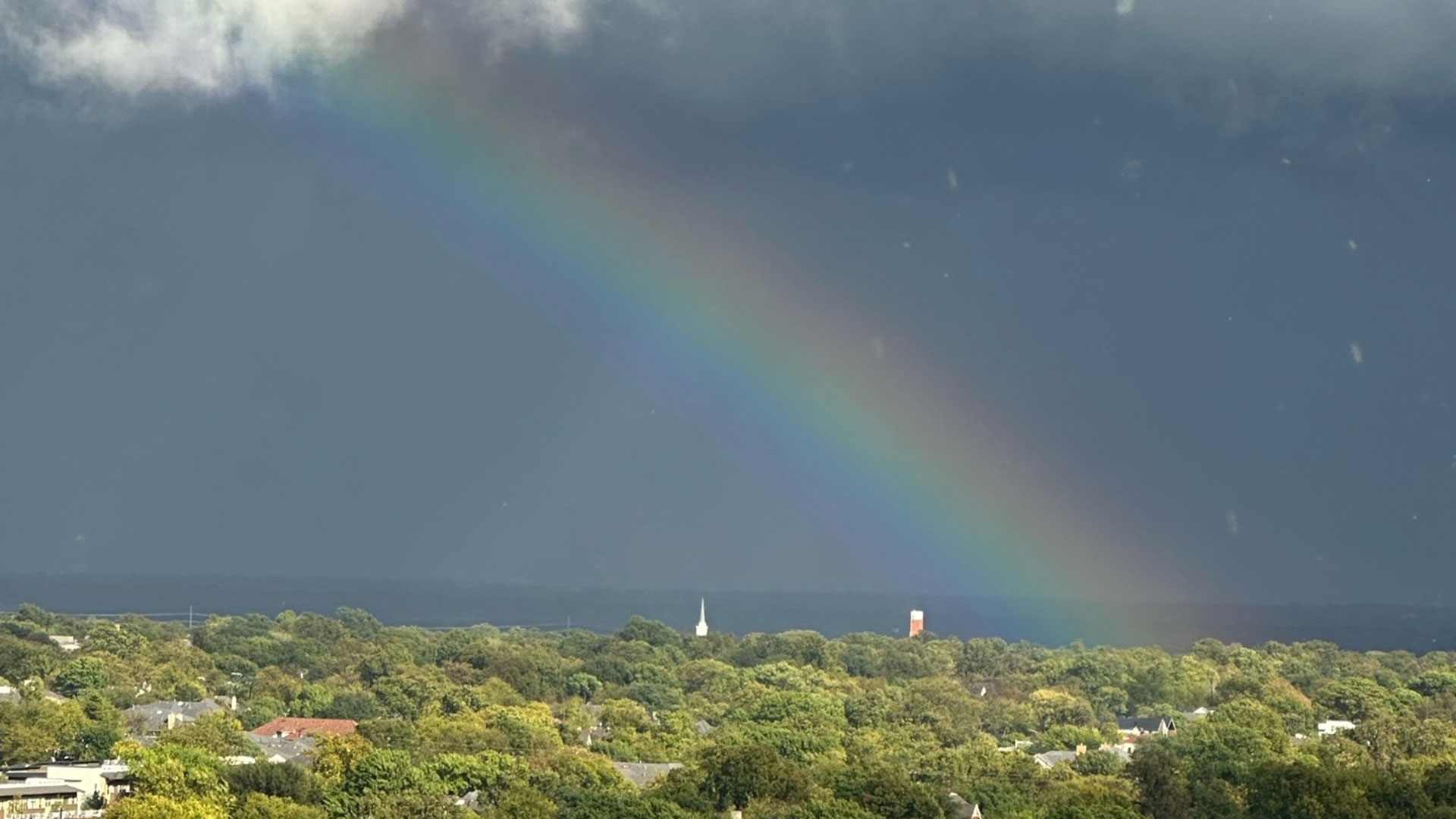 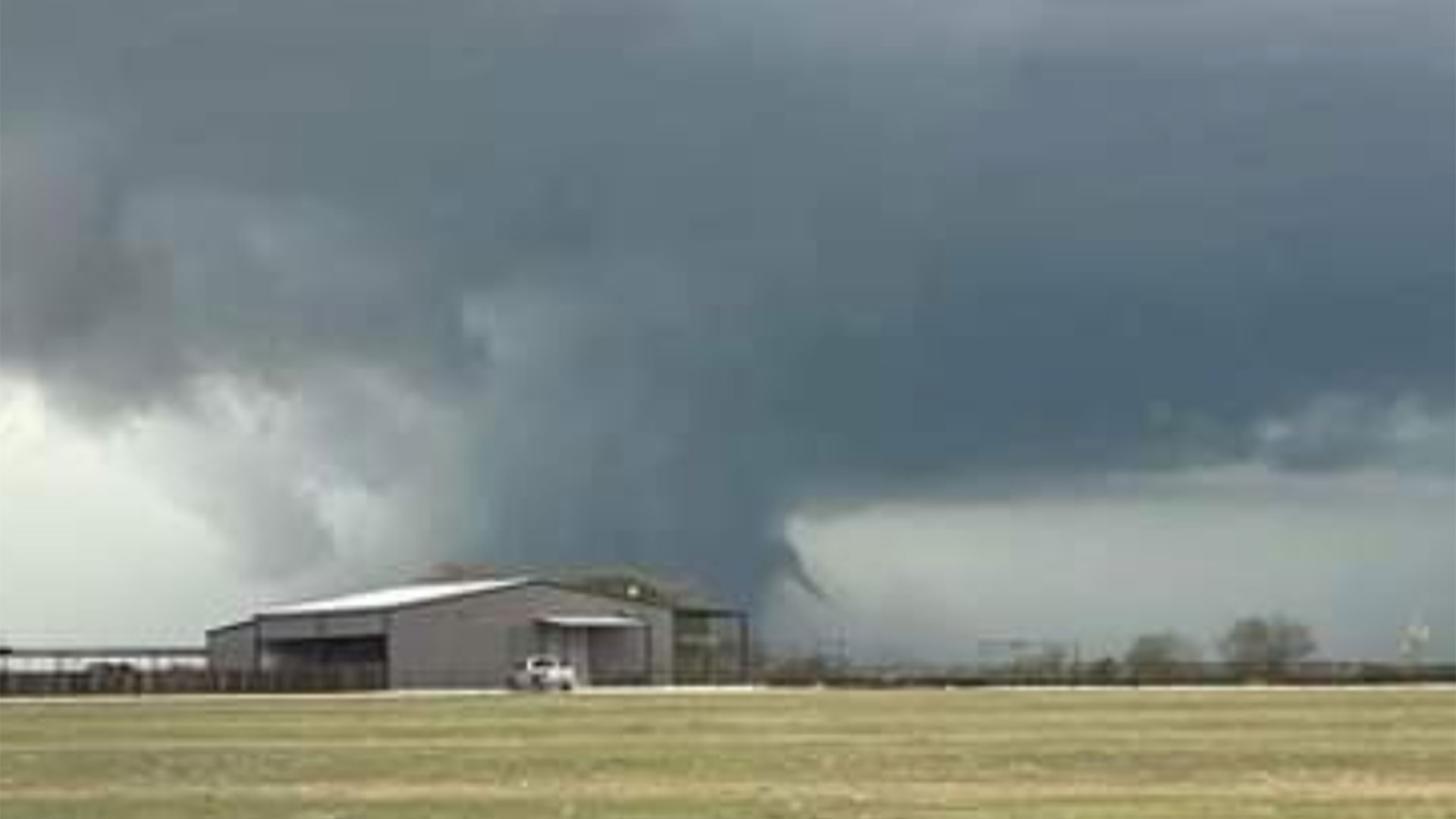 It was a day of tremendous wind and rain, forcing drivers to stay off the highways and seek safety. Downed trees and power lines remain a threat after dark.

"We've got Oncor as well as the street department assisting getting these roads clear, power lines clear, so the road is safe to travel on. Everyone is safe at this time," said Athens Police Det. Zach Harris.

"It's strange because we just live right over there and it seems like it touched down and raised up, I guess," said Sifford

Police and firefighters are keeping watch on the places that were more seriously damaged.

In an old neighborhood just off the Dallas North Tollway, ferocious winds split a huge tree in three.

It landed on a pickup, a roof, and a yard.

"We were just inside and felt a big shake like it was an earthquake I guess. It wasn't lightning because the whole house shook," said Grady Schleier.

Schleier says the tree was probably as old as his house -- 100 years old.

Deb Schweikert saw intense rain at her house in Denton. At a loading dock at DFW Airport, the heaviest flooding workers there say they've ever seen.

And all across North Texas, these early November severe storms reminded everyone Mother Nature can flex her muscle any time of the year.

In an old neighborhood just off the Dallas North Tollway, ferocious winds split a huge tree in three.

Make sure you stay weather aware! If you haven't already, download our mobile apps to get weather alerts on your phone and watch streaming weather coverage on mobile devices as well as on Roku, Fire TV and more. See our suite of digital products here. 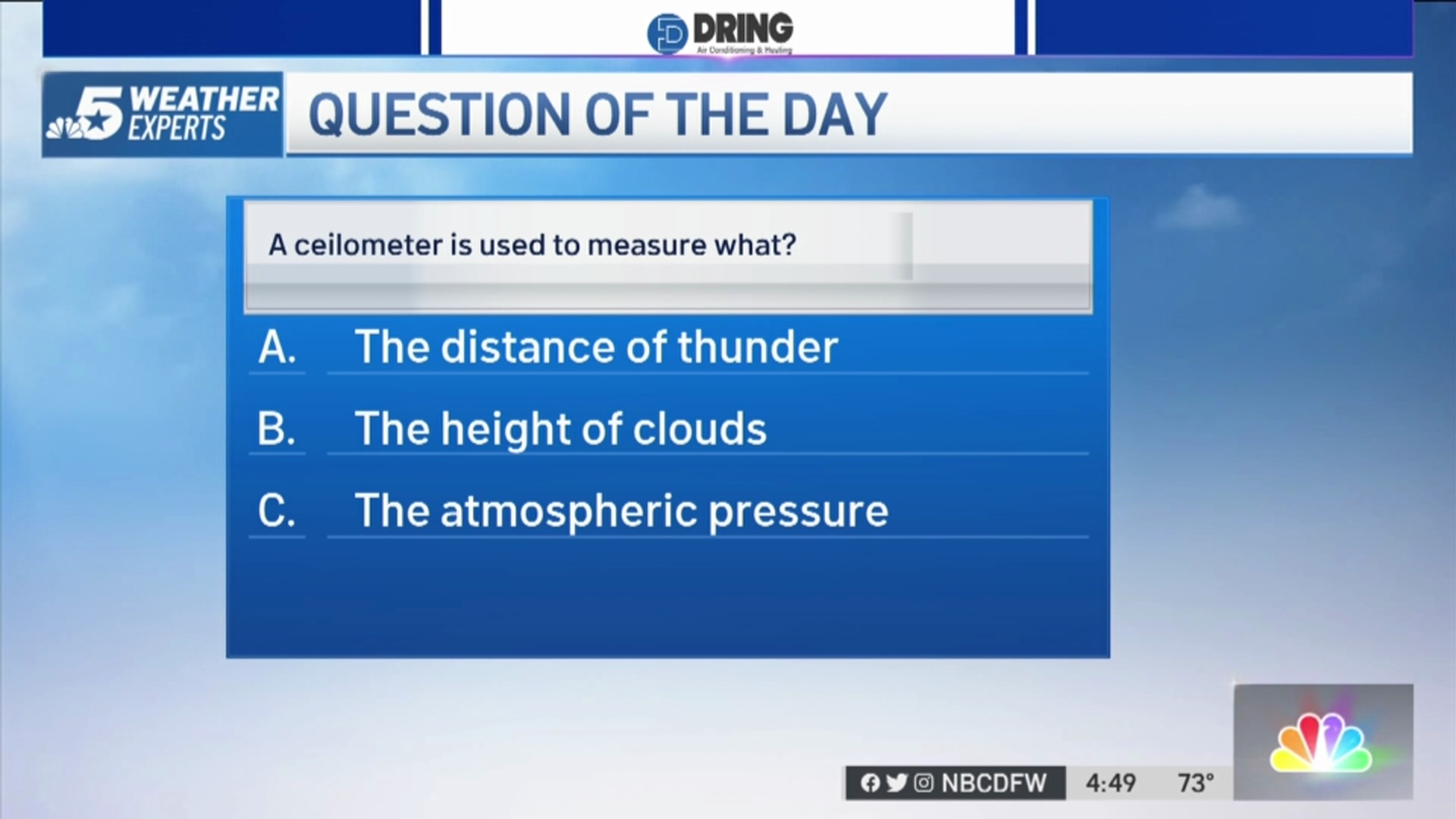 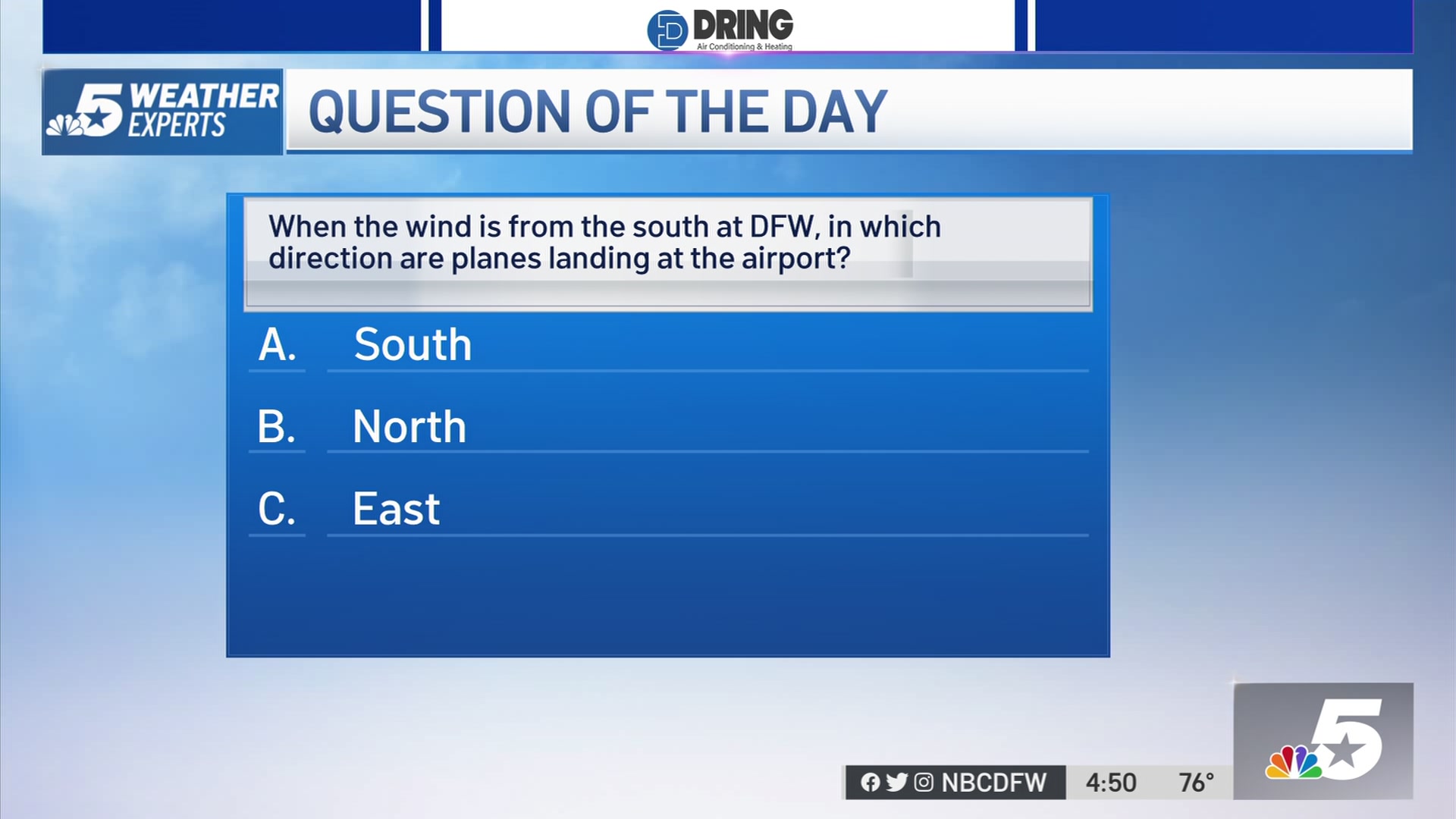