Overnight freezing rain and sleet made for slick surfaces on roads and freeways, leading to collisions and closures across the region

At least six people have died and dozens more were injured in a massive pileup involving at least 133 vehicles on the North Texas Express toll lanes in Fort Worth early Thursday morning that occurred after overnight sleet made for treacherous driving conditions.

All southbound lanes of Interstate 35W north of downtown, including the interior toll lanes where the crashes took place, remained closed through the day and overnight as dozens of firefighters and other first responders continued to work in bitterly cold temperatures to clear the damaged vehicles from the highway.

The investigation is just getting started after a chain-reaction crash left at least six people dead along I-35W in Fort Worth. Officials know icy roads played a role in the crash, but speed may have also been a contributing factor. NBC 5’s Ken Kalthoff reports.

Dubbed a "mass casualty incident" by firefighters earlier in the day, officials said during a news conference Thursday afternoon that at least 65 people are receiving treatment at area hospitals including 36 who were transported from the scene by ambulance.

MedStar says 13 ambulances were used at the scene. 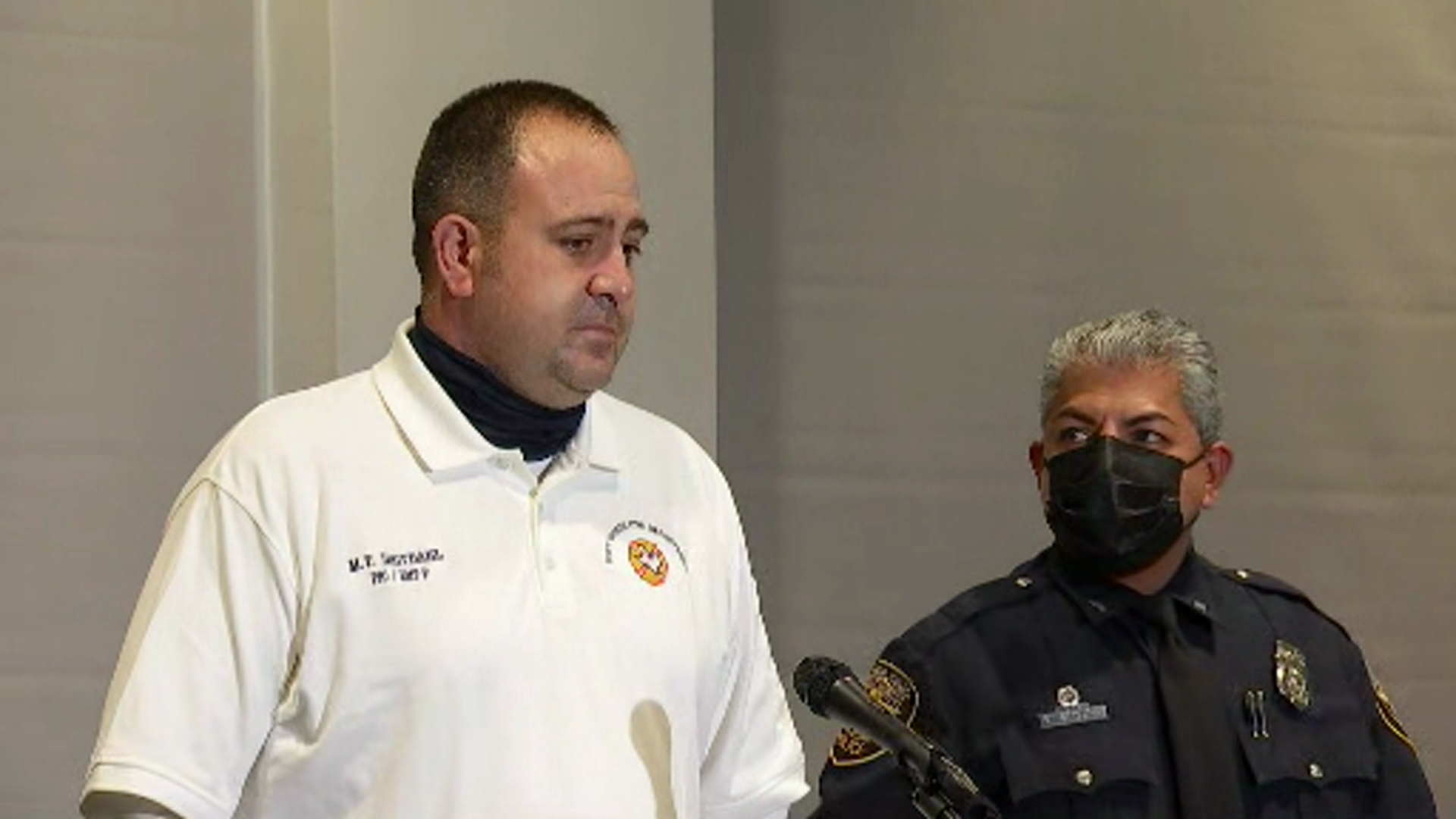 Fort Worth Officials Update on Latest in Deadly Chain Reaction 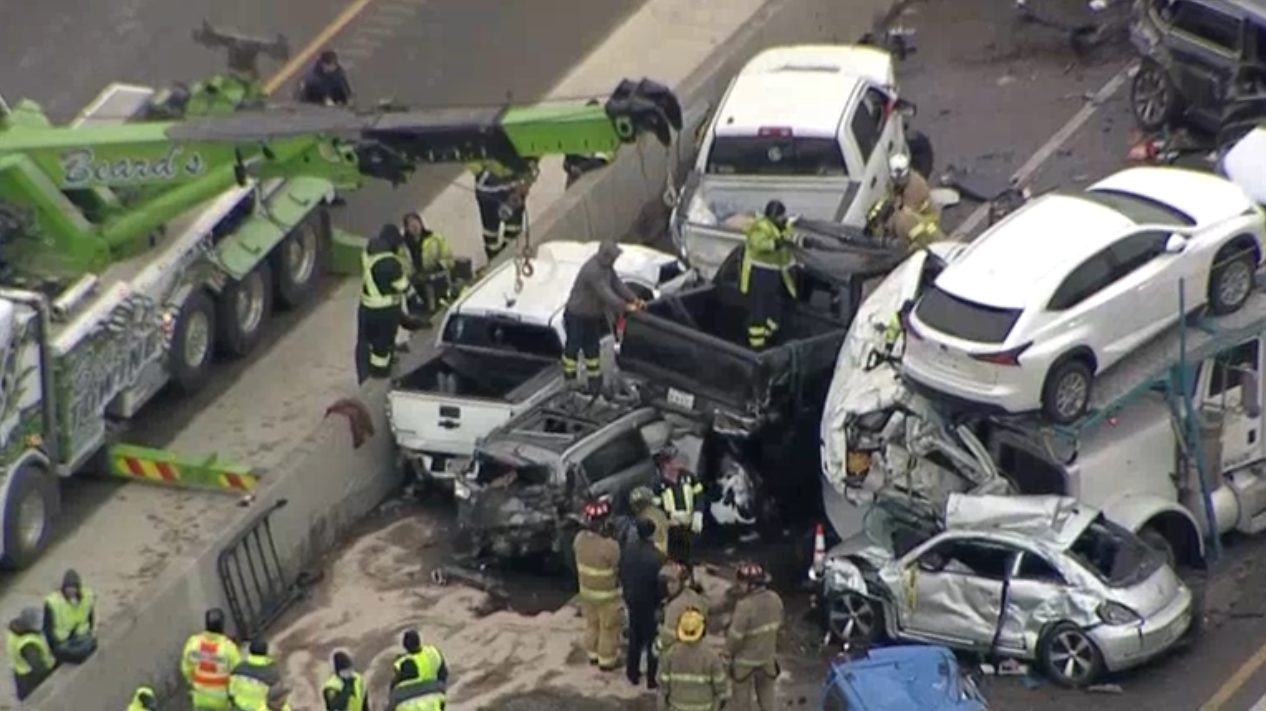 Area hospitals and first responders train for and coordinate to receive patients in a mass casualty situation like this and compare it to the response to a plane crash or tornado.

"This is an incident that our agencies try to train for but hope and pray never happens," MedStar Mobile Healthcare spokesman Matt Zavadsky said.

“Not only does each individual hospital do it they coordinate with fellow hospitals," Dallas Fort Worth Hospital Council President and CEO Stephen Love said. "They coordinate with people like MedStar so they can take the patients and distribute them to the appropriate care they need.”

There were no children involved in the accident, likely due to the time of day. However, there were frontline health care workers involved who appeared to be leaving or heading to a shift at the time of the crash.

"We did see a large number of people who were victims of this accident that were in scrubs, that had hospital IDs on which, to be quite frank, made it a little bit more stressful for those of us, because in some cases some of us might know those folks," said Zavadsky.

The names of those killed in the crash will be released after their families have been notified of their deaths. 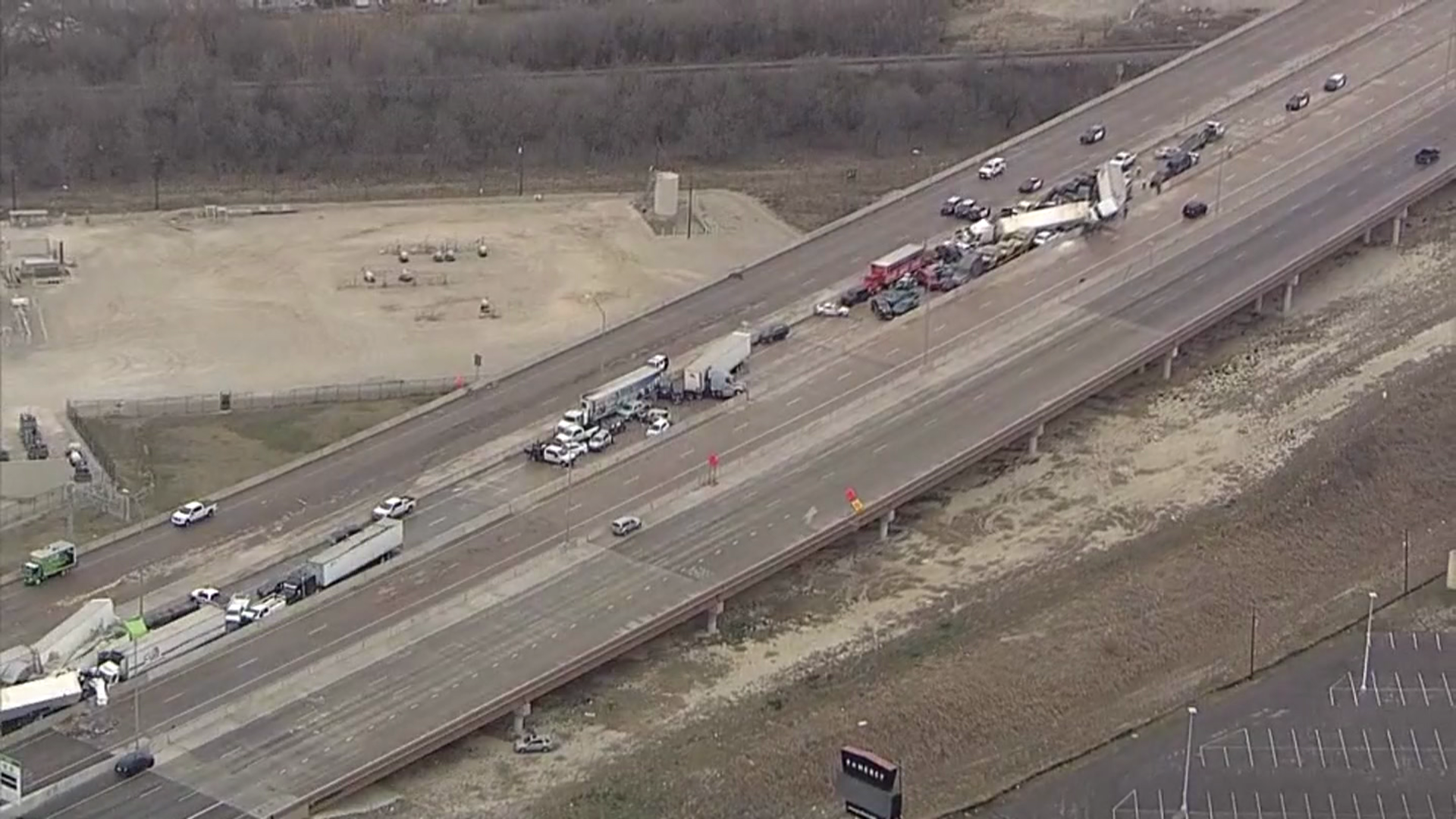 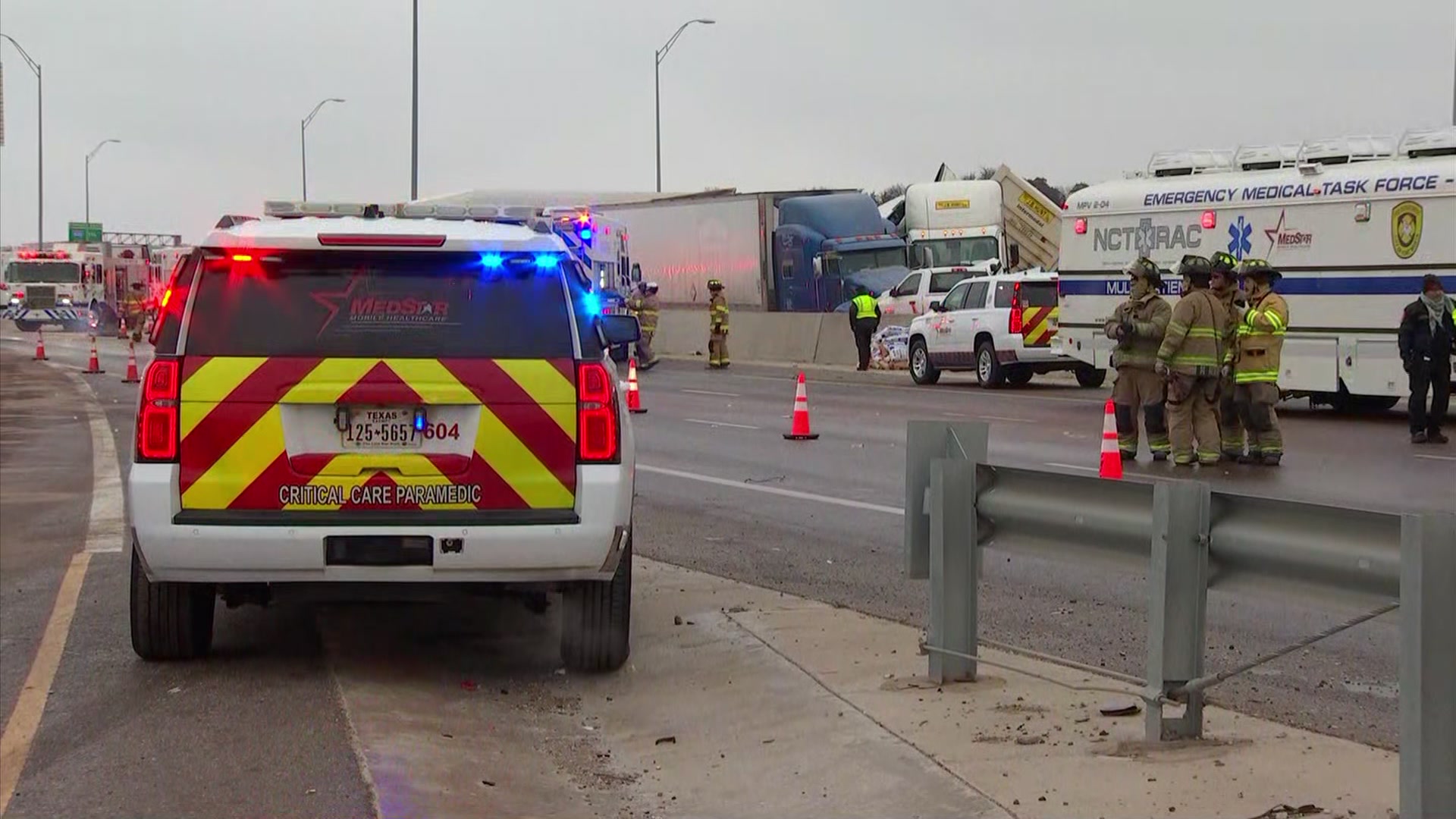 First Responders Say the Deadly Crash on I-35W is One They Train for, But Hope to Never See

At the scene of the crash, which stretches for more than a half-mile in the southbound toll lanes between NE 28th Street and Northside Drive, a tangle of semitrailers, cars and trucks had crashed into each other and had turned every which way, with some vehicles on top of others.

The two toll lanes are within two concrete barrier walls, leaving little room if any, for disabled drivers to escape the oncoming traffic.

A family reunification location was set up for families to pick up and meet drivers or passengers involved in the pileup. The location is the Riverside Community Center at 3700 East Belknap Street. Those trying to reach loved ones involved in the crash are asked to call 817-546-7826.

NBC 5 Meteorologist Grant Johnston said a tenth of an inch of ice fell in parts of North Texas during the morning commute, which resulted in ice accumulations on many roads, bridges and overpasses.

Mike Drivdahl with the Fort Worth Fire Department said Thursday morning that firefighters were going car-to-car, looking for people in need of medical care. 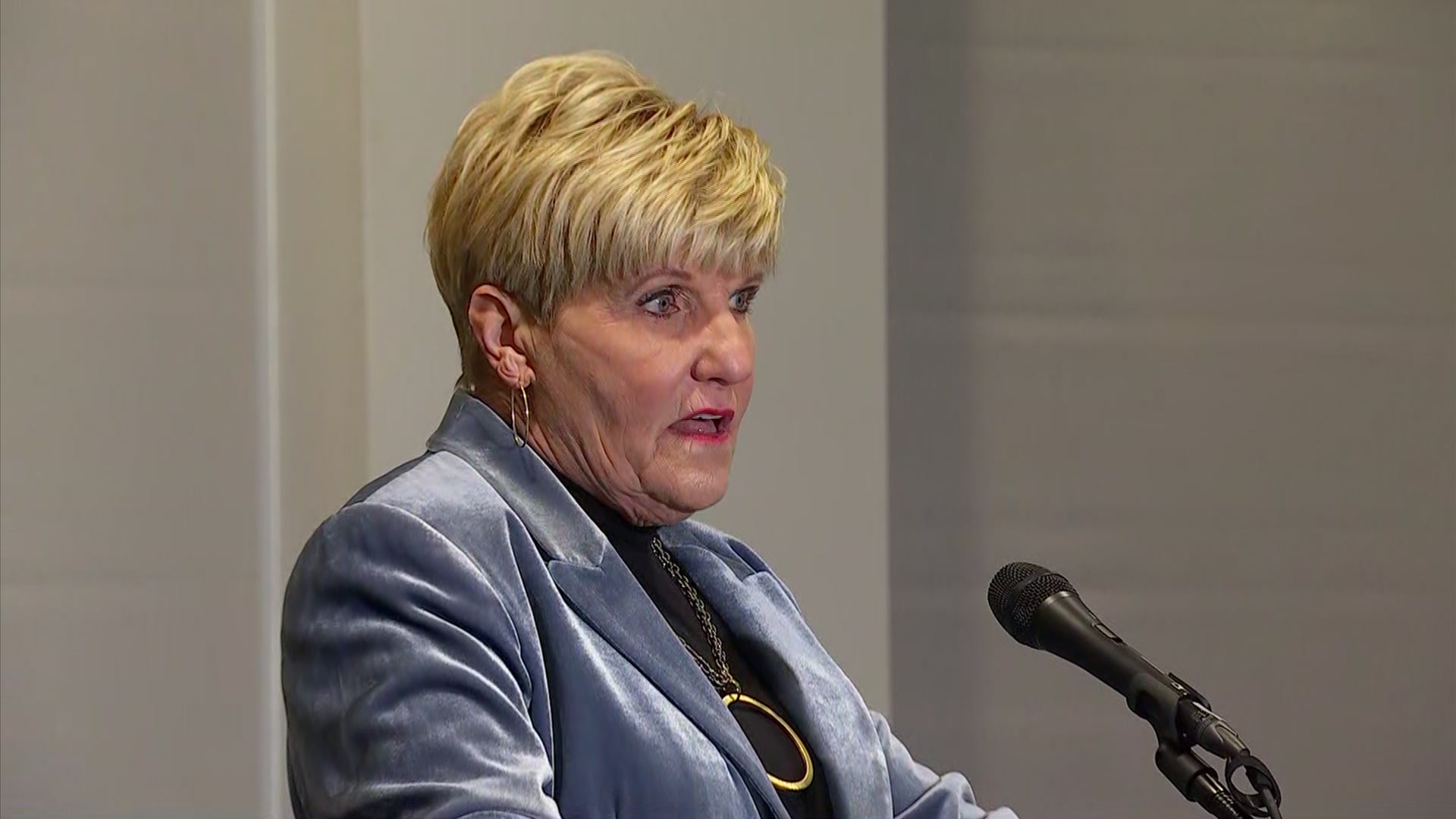 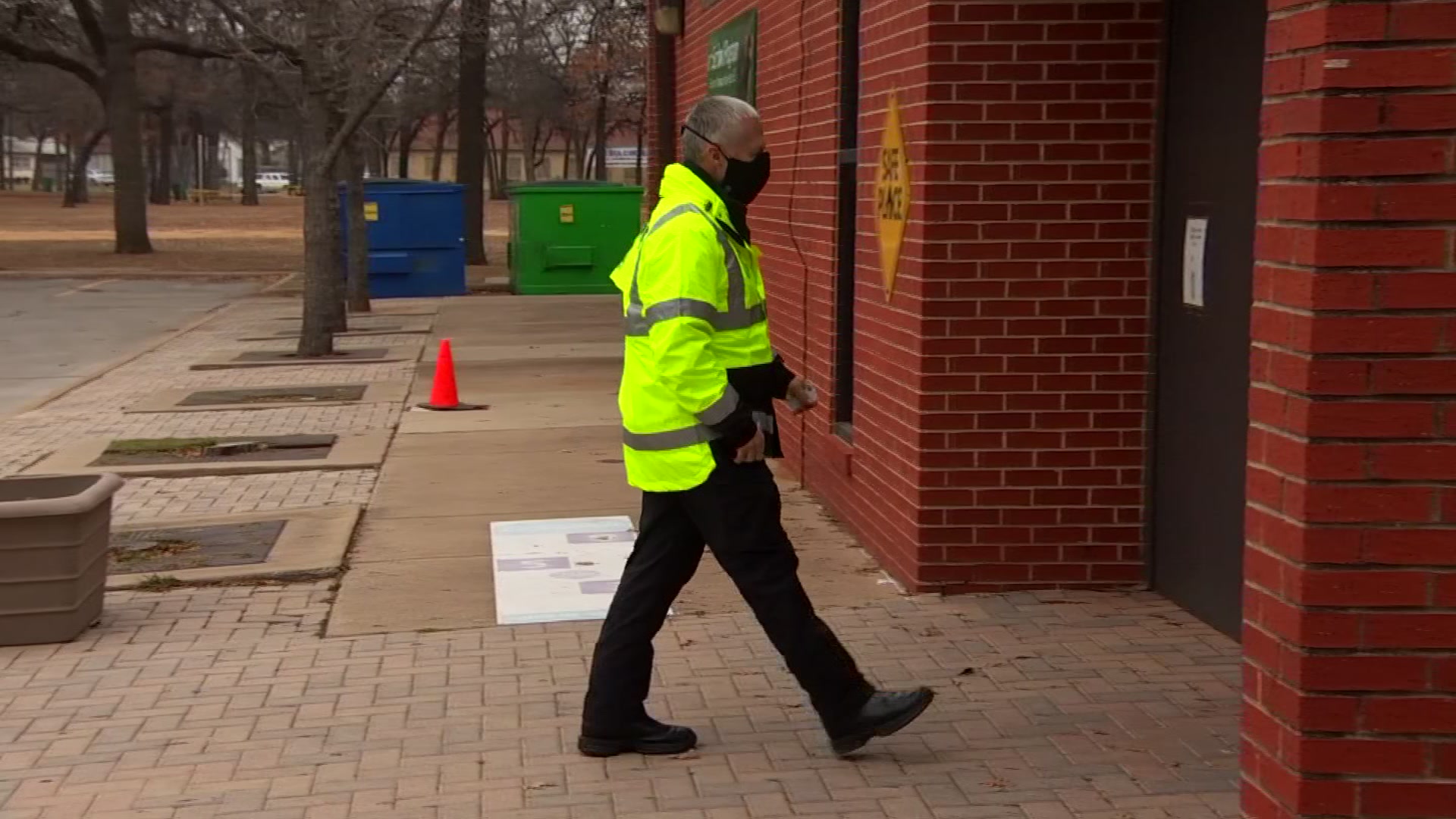 Fire Chief Jim Davis said as crews arrived, the pileup continued. The scene was so large the department set up sectors to determine where each person would focus their rescue efforts.

"There were multiple people trapped within the confines of their vehicles and requiring the use of hydraulic rescue equipment to successfully extricate them," said Davis.

Zavadsky said it's a scene and rescue efforts were extensive.

“The vehicles are just mangled,” said Zavadsky. “Multiple tow trucks are on scene. It’s going to take a lot to disentangle this wreck.” 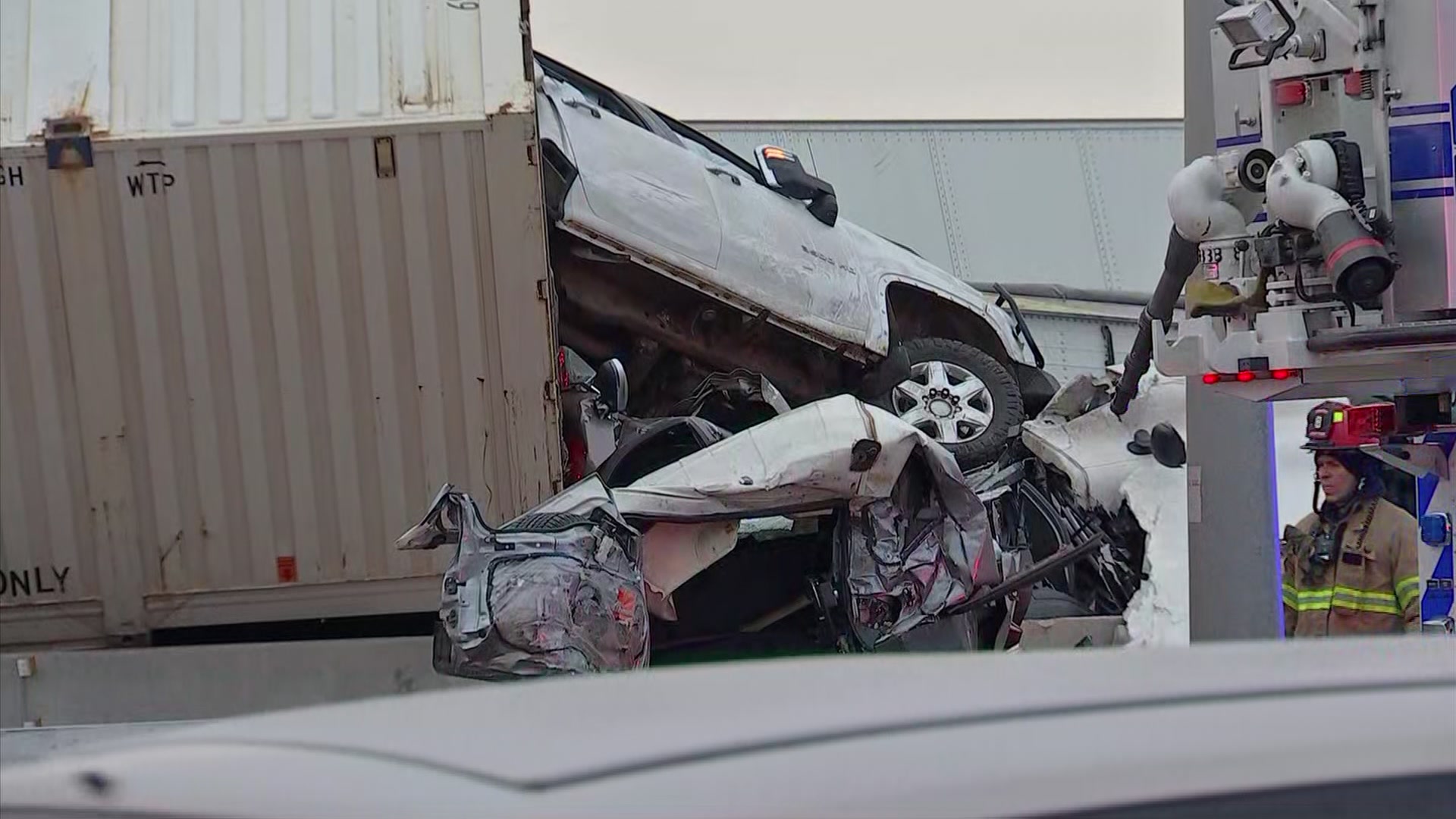 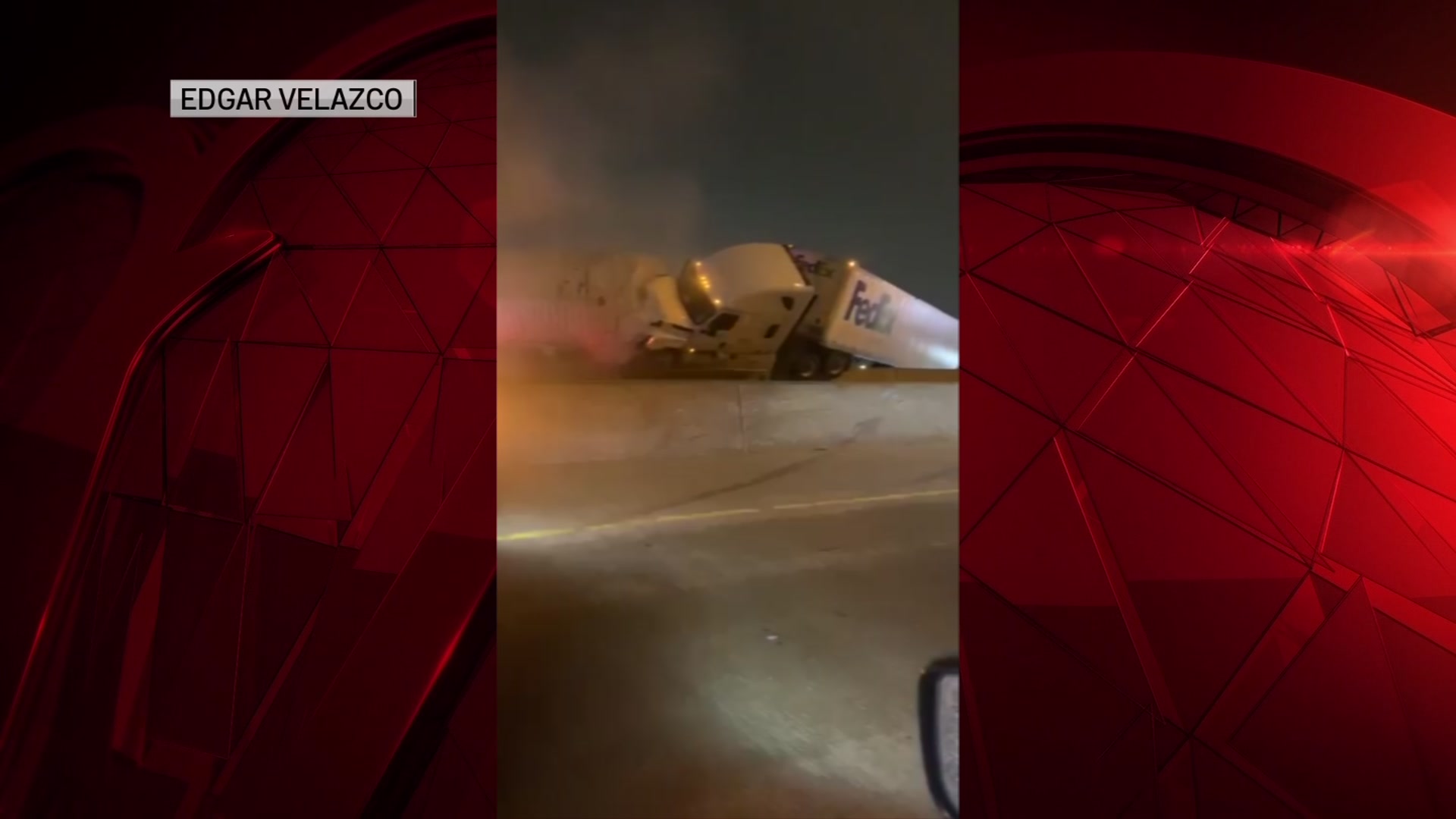 As many as 100 cars are estimated to be tangled in the pileup, Zavadski said earlier Thursday morning. Authorities said it will "take a lot of time" to clear the damage and are recommending people stay home and off the roads if possible.

"If you don't have to get out, please don't get out," Drivdahl said in a live phone interview on NBC 5. "We have a lot of emergency crews doing a lot of work. The last thing we need is people who don't need to be out getting into any type of accidents."

Rescue crews faced slippery conditions and used anything they could -- sand, salt and kitty litter -- to melt the ice as they triaged patients injured in the crash, Drivdahl said.

“The roadway was so treacherous from the ice that several of the first responders were falling on the scene,” Zavadsky said.

He said his crews carry a sand and salt mixture in the ambulances, which they began using at the scene. At one point, he said, one of the ambulances was hit, but it sustained only minor damage and the crew members were fine.

"Right now we’re asking that you keep all of those involved in your thoughts and prayers. In the days ahead we will be posting how you can help most and what that might look like," said Price.

Elsewhere in DFW, three people were killed in two crashes in Dallas overnight and a pedestrian was killed while crossing a street in Arlington. 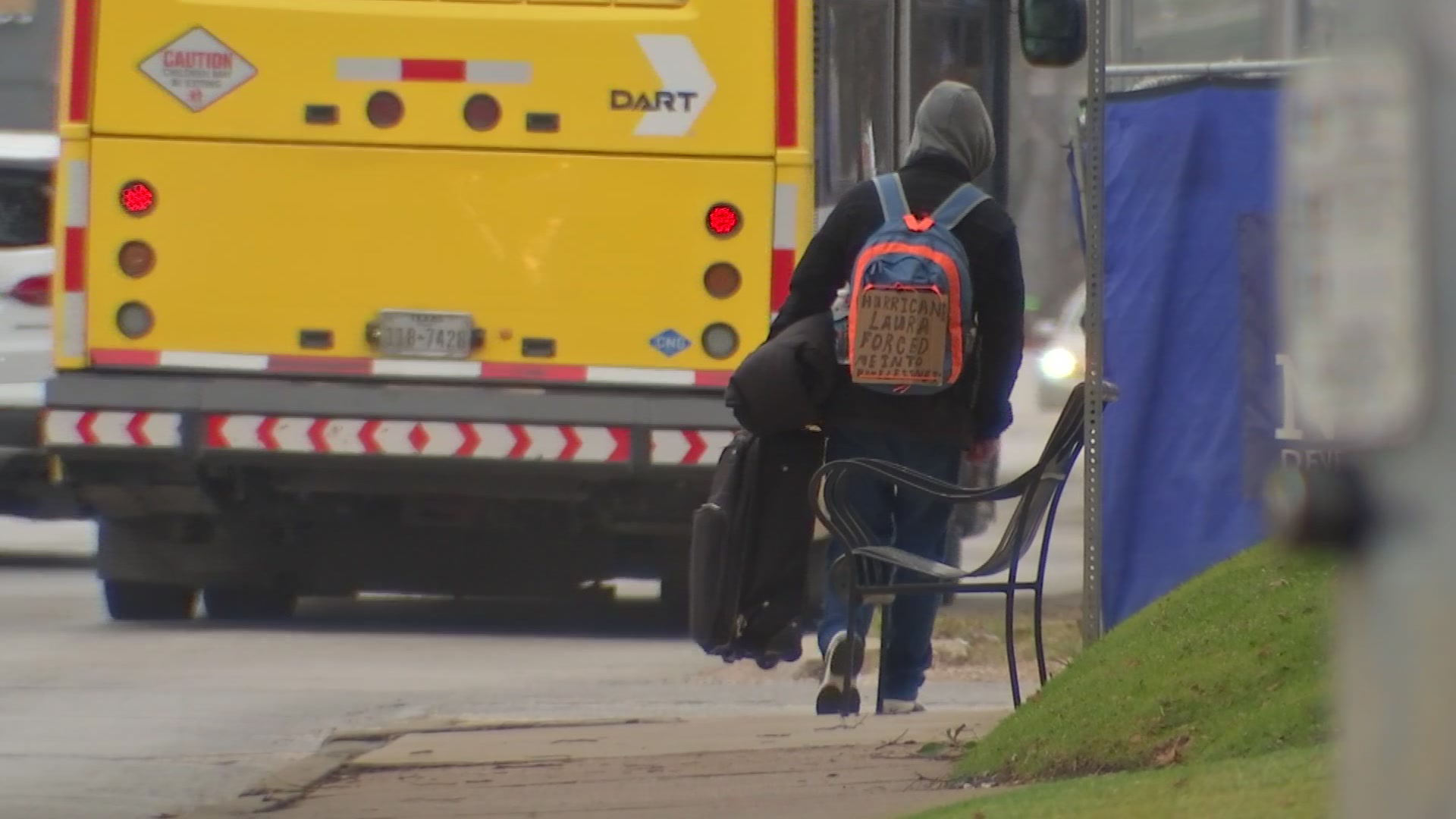 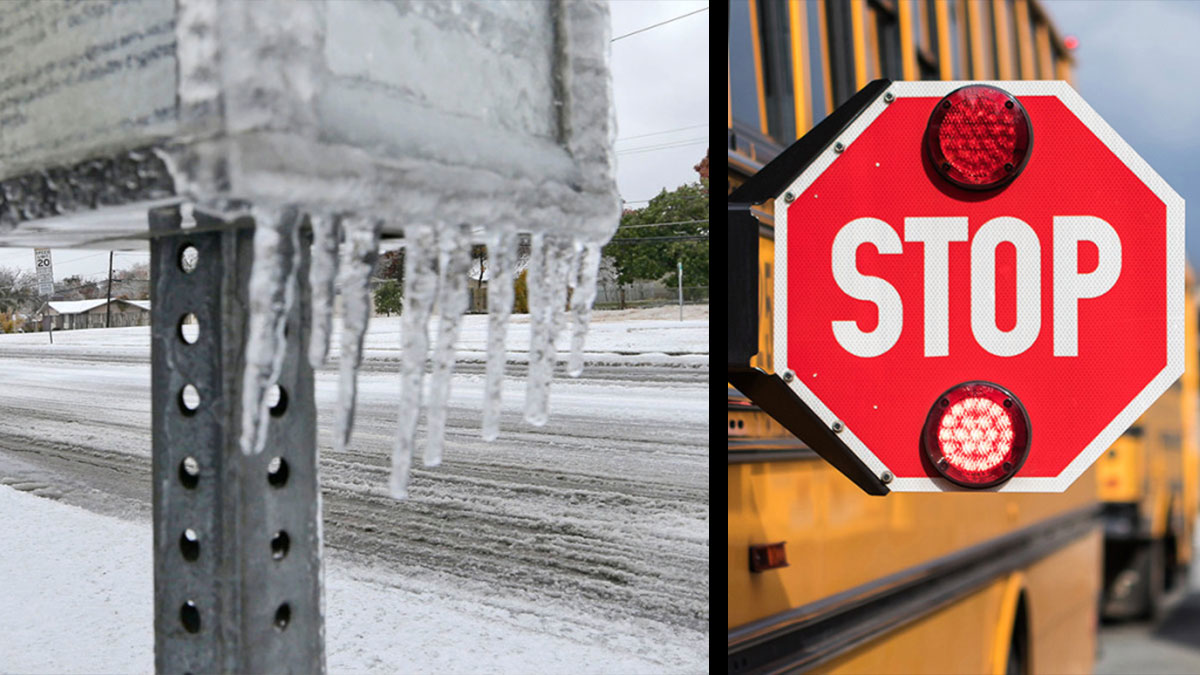