TCU Director of Intercollegiate Athletics Jeremiah Donati announced the hiring Tuesday afternoon, confirming speculation that Saarloos had been given the job.

“I am thrilled that Kirk Saarloos has accepted our offer to become TCU’s next head baseball coach,” Donati said. “It became very apparent from our meetings with numerous current and former baseball student-athletes that this program is about the family-like atmosphere and amazing culture that exists among the players, coaches and staff. One of the biggest objectives in this search was finding a coach who would make preserving these values a priority."

“We have an elite baseball program at TCU. We set out to find a coach in the search process that had a vision and a plan to elevate this program even higher. In Coach Saarloos not only did we find a great coach with a tremendous plan, we found someone who is a perfect fit for this baseball program and university.”
TCU's Jeremiah Donati

Saarloos is now the 20th head coach in the program's history. He has been an assistant with the TCU baseball team since 2012 and in 2013 was promoted to also oversee recruiting. Prior to joining the staff at TCU, Saarloos spent two seasons as the pitching coach at Cal State Fullerton.

The Frogs on Tuesday named assistant coach and recruiting coordinator Kirk Saarloos the next head coach of the baseball team.

Saarloos replaces Schlossnagle, who, after 18 years coaching the Horned Frogs announced last week he was packing up and moving to College Station to coach the Aggies. Following Schlossnagle's departure, TCU said they would conduct a national search for his replacement but apparently didn't need to go too far to find one. 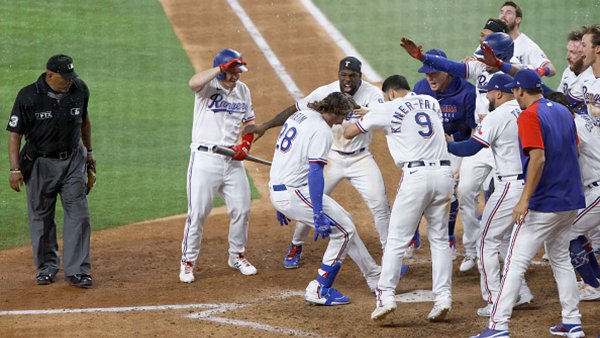 “One of the main ingredients in the secret sauce of the success of our baseball program over the past nine seasons has been having Coach Saarloos on our staff,” TCU Chancellor Dr. Victor J. Boschini Jr. said. “We were blessed the year that Kirk and Kristen came to TCU and Fort Worth. Megan and I are excited to be able to watch as Coach Saarloos takes our baseball program to that proverbial next level.”

The Horned Frogs this year shared the Big 12 regular-season title with Texas, won the conference tournament and were a No. 6 national seed in the NCAA Tournament before losing at home last weekend.

"We weren't done yet, we haven't reached what we want to reach," Saarloos said. "It wasn't done yet. This is where my heart is."

The school credits Saarloos' mentorship of the pitching staff as being one of the key reasons the program made four straight trips to the College World Series from 2014-17.

"On the recruiting trail, Saarloos has become a force to be reckoned with," the school said in his bio. "The incoming class for the 2021 season was ranked 13th nationally. That comes on the heels of the No. 4-ranked recruiting class in 2019. Since his arrival, TCU's recruiting classes have continuously been ranked in the top-25."

NBC 5 Sports Director Newy Scruggs talks about the mark Jim Schlossnagle left at TCU and looks ahead to the future of the Horned Frogs’ baseball program.

Saarloos and his wife, Kristen, have a son, Brady, and two daughters, Emery and Lane. Learn more about Saarloos here in his TCU biography.