Semien, Seager RBI Singles for Texas in Win Over Astros

Marcus Semien and Corey Seager had RBI singles in the decisive seventh inning, Adolis Garcia added a bases-clearing double in the eighth, and the Texas Rangers beat the Houston Astros 6-2 on Monday night in the opener of a four-game series at Globe Life Field in Arlington.

Pinch-hitter Willie Calhoun opened the Texas seventh with a double off just-in reliever Phil Maton (0-1), who after getting his only out allowed Semien's single through the left side of the drawn-in infield that tied the game at 2-2. After another pitching change and a wild pitch, Semien came home with the go-ahead run on Seager's sharp single to right.

Garcia's bases-loaded double into the right-field gap came with two outs in the eighth for Texas, which won for only the second time in seven home games this season.

Yordan Alvarez hit his fourth homer for the Astros. Kyle Tucker drove in a run with a single on which he initially slammed his bat to the ground in disgust thinking he had popped out to shallow left.

Houston starter Framber Valdez allowed only an unearned run over six innings, striking out five, walking two and hitting a batter. The lefty departed after throwing 60 of his 97 pitches for strikes.

Valdez seemed OK after Nathaniel Lowe's bat shattered in the fourth and helicoptered into the pitcher's upper back. That happened when Lowe, who had two hits to raise his batting average to .381, grounded into an inning-ending double play. 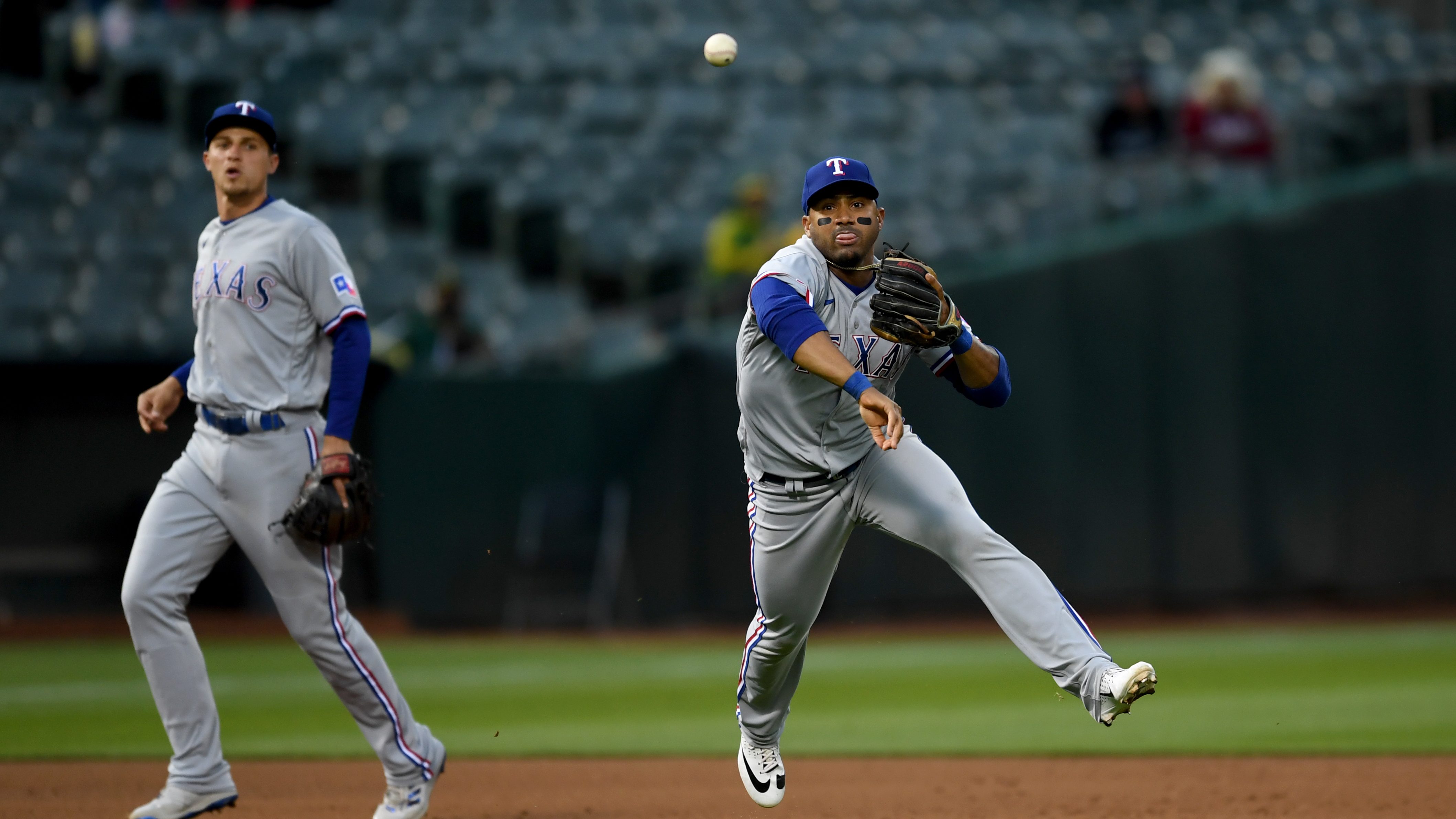 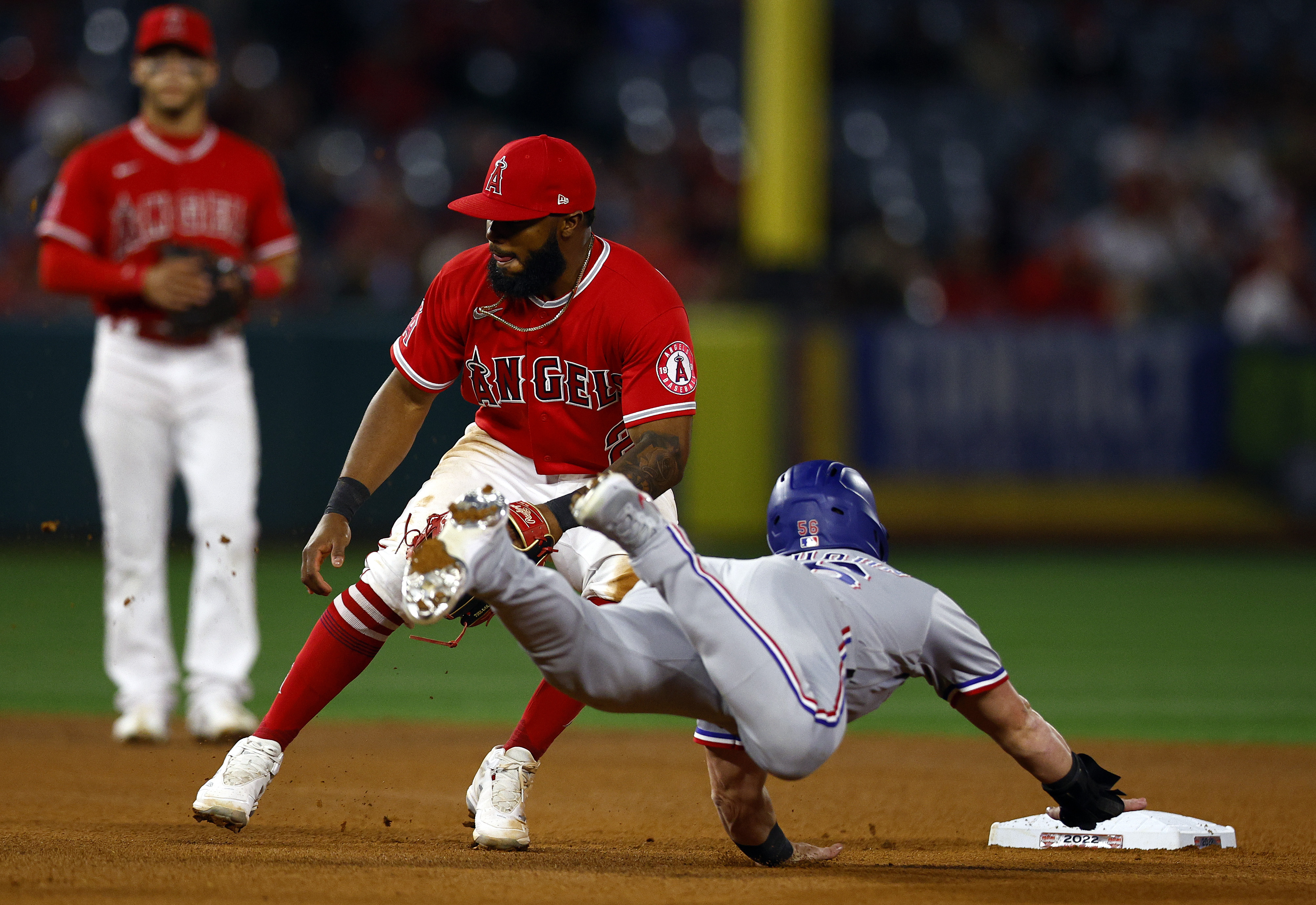 Alvarez hit his fourth homer in the second, but Texas got even with an unearned run in the bottom the inning when Nick Solak reached on rookie shortstop Jeremy Pena's error and scored on Charlie Culberson's groundout.

After Yuli Gurriel had a two-out single and a stolen base in the sixth, Tucker slammed his bat when he hit a popup to shallow left. But he instead got an RBI single for a 2-1 lead when fielder Solak was unable to make the catch after running a long way and then lunging toward the line.

Astros: Alvarez fouled a pitch off his right shin while batting in the third inning. He immediately jumped away from the plate in pain and dropped to both knees with his head bowed toward the ground. He eventually got up and stayed in the game, then hit an inning-ending comebacker to Dunning.

Rangers: Manager Chris Woodward said RHP Spencer Patton's right oblique issue isn't thought to be serious even though the right-hander was put on the 10-day injured list Sunday. Woodward said before Monday's game that Patton had been pitching through some soreness.

Jake Odorizzi (0-2, 9.00 ERA), who didn't make it out of the first inning in his last start, is scheduled to take the mound for the Astros. Rangers lefty-hander Taylor Hearn (0-1, 7.59) is 2-0 in seven career appearances against Houston, the only team he has multiple victories against.