With just over two months to go until the first event at Globe Life Field, workers continue working on the stadium’s retractable roof.

Here's more from the Rangers on each player.

Bahr, who turns 25 on Feb. 15, was named the organization's 2019 Nolan Ryan Minor League Pitcher of the Year after going 10-4 with a 2.51 ERA over 23 games/starts with Frisco and Down East while being named a Carolina League mid-season All-Star.

Barlow, 24, combined to go 6-2 with a 3.16 ERA in 49 relief appearances with Nashville, Frisco, and Down East in 2019, earning Carolina League mid-season All-Star honors. His 14.68 strikeouts per 9 innings rate ranked sixth in all of minor league baseball (min. 50 IP). 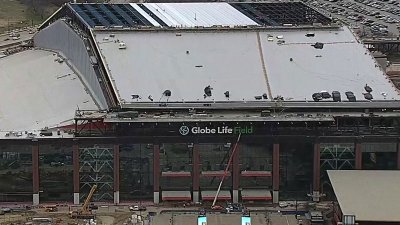 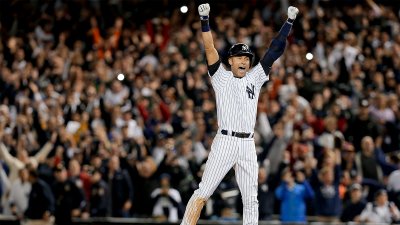 Herget, 26, was acquired on a waiver claim from Cincinnati on Dec. 2. He was designated for assignment on Dec. 21 and assigned outright to Nashville. The right-hander reached the Major Leagues for the first time in 2019, posting no record and a 4.26 ERA over five relief appearances with the Reds.

Huff, who turned 22 on Jan. 14, combined to bat .278 with a career-high 28 home runs and 72 RBI over 127 games with Down East and Hickory in 2019. Following the season, he was rated as the fifth-best prospect in the Carolina League by Baseball America.

Travis, 26, was acquired from Boston in exchange for left-hander Jeffrey Springs on January 15 and assigned to Nashville. He split last season between Boston and Triple-A Pawtucket, batting .215 with 6 home runs and 16 RBI over 59 contests in the Majors.

White, 25, batted .253 with a career-high 14 home runs and 43 RBI over 116 games with Nashville in 2019, his first career Triple-A action. He served as the Sounds' primary shortstop and also saw extended action in center field for the first time in his career.

Texas Sky Ranger flew over Globe Life Park Tuesday, Jan. 21, 2020 and recorded the following video showing the retrofitting done to convert the stadium from a baseball facility into one capable of hosting football and soccer games.

With the additions of these players, the Rangers now have 62 players on the spring training roster: a full 40-man roster along with 22 non-roster invitees.

Sagara has served as the Chicago Cubs Minor League Pitching Coordinator for the past two years. He spent six seasons from 2012-17 in the Miami Marlins system, including the final year of that span as assistant pitching coordinator. He was selected as the Marlins' Player Development Man of the Year in 2015. Sagara has been a pitching coach in various capacities for 20 seasons, and has also worked as a part-time scout for the Mets (2006-09) and Braves (2010-11). The Hawaii native and former pitcher was selected as the University of Hawaii-Hilo Male Athlete of the Year in 1995-96.

Torres, 29, will be in his first professional coaching role after an 11-season professional career from 2008-18. The former catcher was originally selected by Texas in the 45th round of the 2008 June draft and played 10 seasons of affiliated baseball, all in the Rangers system, before finishing his career in 2018 with New Jersey of the independent Canadian-American Association. The Puerto Rico native reached the Triple-A level with the Rangers in 2017.

Hibbard has served as pitching coach at Double-A Frisco in each of the past two seasons and this will be his fifth year in the Texas organization. Prior to joining the Rangers, he spent 13 seasons as a pitching coach in the Cleveland farm system.