You may have heard we're icing a team for the 2008-09 Hockey Blogger Invitational; which is put together by our esteemed friend James Mirtle, who is either painfully oblivious or keenly aware that we suck at fantasy hockey.

This isn't to say we haven't had success in the past -- the Elias Sports Bureau (pronounced "El-eee-ahsh") has been competitive in a D.C.-based Yahoo! league for years -- but rather that we're about as lucky as that guy who finally had a chance to draft Tom Brady in his football league this season. 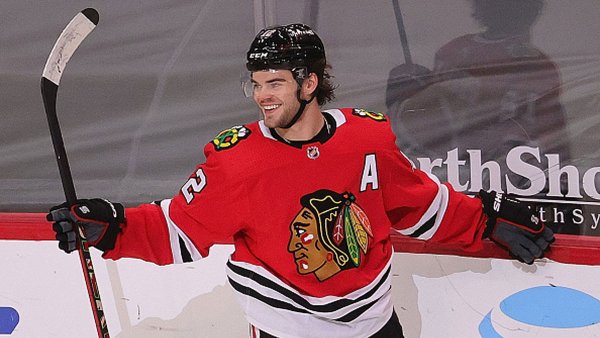 The draft was held last week, and it was the first time we've ever taken part in an 18-team live draft before. It's pretty much like running a marathon, but without the eventual sense of exhaustive euphoria. The deeper the draft goes, the slimmer the pickins'. By the end of the thing, we were performing split-second Internet searches to make sure the player on our draft board wasn't in the KHL, crippled or dead. At one point the 20th round, the Puck Daddy team was deciding between Wendel Clark, Garth Snow and Paulina Gretzky.

The Forechecker published his team already. He's like the love child of Mel Kiper and Bill James on these fantasy leagues. Earl Sleek offered up both the Battle of California team and PJ from Sharkspage's squad. PJ drafted Steve Sullivan in the 20th round; too bad there wasn't a 21st  round so he could have drafted a male nurse to push Sully around in his wheelchair by midseason.

As you can see from the image above, we managed to draft a few decent forwards. Here's a look at the Puck Daddy fantasy hockey team:

The hope here is that Briere has a right wing option added by Yahoo!, because that would really help out the lineup. Gaustad is, of course, already injured. Zajac can still be a viable player if he earns his place in a Devils' lineup that's deeper offensively thanks to Brian Rolston. And sources say that Datsyuk may be playing with a pretty decent new winger this season.

Modin was our team's Mr. Irrelevant, but after having drafted just two goalies, he had to go. So basically this group is a total crap shoot, huh? Elias can be one of the best offensive players in hockey, or a middling snooze. Lucic has regressed in camp. Perron could be the next Brad Boyes or a slumping sophomore. Brunnstrom is, as we've written many times, the unicorn at the circus until proven otherwise.

The Bouchard pick is a good one, but you can see why Briere flipping to the wing would help our squad immeasurably. Pretty sure we didn't realize "RW" was an actual part of the lineup until the seventh round ...

Fairly happy with this group, outside of Morris, who we drafted with about two seconds on the clock after making an ill-timed beer run. Klesla could be a steal if the Jackets give him mondo power-play time. Jovanovski could be, what, about 90 percent of our PIM?

There was a massive run on goalies; we took whatever was still available. At least neither of the starters is in a platoon this season. There's also zero chance either of them will start more than 70 games. Boo.

What do you think? OK, scratch that: How screwed are we?