The offensive scheme, for the most part, is effective but unimaginative.

The Cowboys have lost consecutive games by a combined score of 64-16, and their playoff hopes without suspended running back Ezekiel Elliott are slim.

It’s at a moment like this Dak Prescott must remain true to himself. 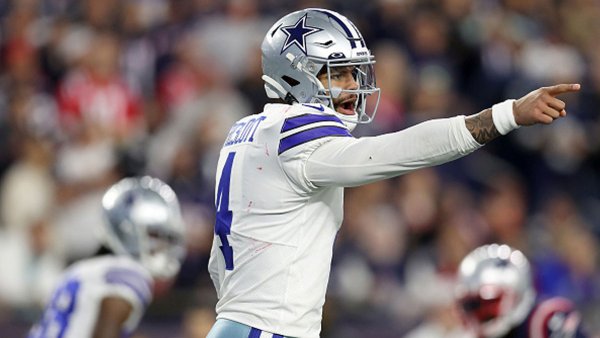 The urge for any player facing this circumstance is to do more. That’s a bad idea.

He tried to do more against Philadelphia, whether it was conscious or subconscious, and it failed miserably. He passed for 145 yards with a career-high three interceptions and a passer rating of 30.4.

It was the worst game of his career in a game the Cowboys needed to win to remain in contention for the NFC East title.

Frankly, it wasn’t all that different from his performance against the New York Giants last December, when he passed for 165 with two interceptions and a passer rating of 45.4.

He responded with one of the best games of his career, completing 32 of 36 passes for 279 yards in a win over Tampa Bay.

Play this game long enough whether you’re New England’s Tom Brady or Green Bay’s Aaron Rodgers and there’s going to be a night like Prescott had against the Eagles.

Heck, Tony Romo owns every significant passing record in franchise history and he had 12 games with at least three interceptions and seven with a passer rating of less than 50.0.

So it happens; Prescott’s response is what matters.

Prescott never looked comfortable in the pocket against Philadelphia, as you might expect considering Byron Bell was protecting his blindside instead of Smith. He forced some passes into coverage like his second interception and he simply missed others.

Coach Jason Garrett has suggested Prescott held the ball too long on some passes, giving the pass rush time to get to him.

Against Los Angeles on Thursday, Prescott said he wants to give his receivers more opportunities to make plays.

“Me, personally, I have to take some passes underneath and let guys run with the ball in their hands,” he said.  “The game goes back to two or three   plays and you can always say if we had this or that on that play it would’ve been a different game.

“For me, it’s about measuring the risk vs. reward. I want the big shot but there might be a guy underneath who might run for just as much as the deep ball.”

That’s an interesting approach considering the Cowboys are among the league’s worst at making big plays in the passing game. Owner Jerry Jones has spent $26 million on his receiving corps, third most in the league, but they rank 29th in the NFL with 22 receptions of 20 yards or more.

Only the New York Giants, Chicago Bears and Baltimore Ravens have fewer.

But it’s not in Prescott’s nature to complain about things that aren’t in his control. For a second-year player, Prescott has a wonderful sense of self-awareness.

He doesn’t get caught up in the noise that surrounds a stellar performance or the chatter that accompanies a poor one.

All he knows is work.

Instead of having a pity party for playing poorly in a national TV game, he’s been studying the Chargers and working on ways to improve his own play.