Martin and Arlington high schools are scheduled to host five games, and Bowie, Lamar, Sam Houston and Seguin would each host one

At least 14 Arlington ISD high school football games are expected to be held at Globe Life Park during the 2020 season.

As part of an agreement between the Texas Rangers and the school district, the AISD would play a minimum of 14 regular season football games at the old Rangers stadium. The decision was finalized at a school board meeting late Thursday.

"The Rangers want to thank the Arlington Independent School District for helping make Globe Life Park in Arlington a destination for high school football," said Sean Decker, the Rangers executive vice president for sports and entertainment in a written statement. "We are certainly hoping to have the honor of hosting these high school games this fall."

But the plan could still be up in the air. Decker noted that health and safety come first, and that they will await further guidance from the city. 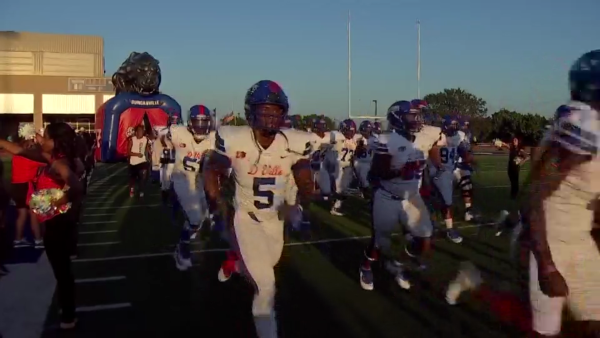 As part of the agreement, Martin and Arlington high schools are scheduled to host five games, and Bowie, Lamar, Sam Houston and Seguin would each host one.

The games would be held Thursday, Friday and Saturday nights at 7 p.m. with the opening game scheduled for Aug. 27 between Lamar and Euless Trinity high schools.

The final regular season game is scheduled for Nov. 5.

The district is also scheduled to hold its annual Dean Corey Band event at the park in early October.

"This is an outstanding opportunity for our district at Globe Life Park," AISD Superintendent Marcelo Cavazos said in a statement. "This will provide a unique and lasting experience not only for our football players, but also for our students, cheer teams, bands, families and everyone coming to the park."

The stadium was converted with a synthetic grass field after the Rangers played their final game there in 2019.

Globe Life Park was most recently the new home to the Dallas Renegades, an XFL football team, but the XFL canceled the remainder of the season in early March because of the new coronavirus, just a month after the team played their inaugural game. The team has since said the league will fold and not return in 2020.

Globe Life Park is also playing host to North Texas SC, a professional soccer club playing in the USL League One. The team is owned by FC Dallas and operates as a reserve team of the MSL club. The 2020 USL League One Season was to run from March 28 through Oct. 3, but like all sports is on hold due to the coronavirus pandemic.