The rush of being the first one out on the field has never gotten old, Ramon De Paula said

When the lights come on for Friday night football at Walt Whitman High School, the smile of one coach shines just as bright.

Assistant Head Coach Ramon De Paula is celebrating 20 years with the team. He was born with Down syndrome but says he will never let it stop him from following his dreams.

"Being out there on the football field — anyone else who has disabilities, they also can do the same," he said.

At 36, De Paula has been with the team in Bethesda, Maryland, longer than his players have been alive. He attended the school himself. 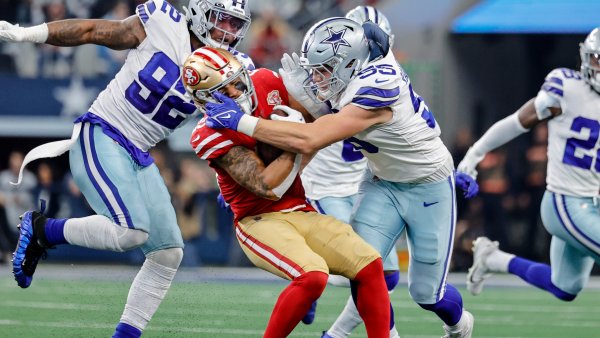 "He said, 'Mom, I just signed up for football.' And I said, 'You did what?'" his mother, Haydee De Paula, recalled.

De Paula started as an equipment manager. His mom was worried, but the team promised her they would take care of him. Over the years, he rose through the ranks to become a coach. He leads the team in running through a banner at every home game.

The rush of being the first one out on the field has never gotten old, De Paula said.

"You see me? I led the charge," he recently told the head coach.

De Paula calls the team his second family. Forming family is an effect he seems to have everywhere he goes. He volunteers for the Glen Echo Fire Department. Every Christmas, he dresses up as Santa.

Being a coach to his players, though, is his biggest success. The team recently marked his 20th anniversary with hugs and cheers.

"I love them very much. Being 20 years with the football team, it’s the biggest landmark in my life," he said.

The Down Syndrome Network of Montgomery County holds its annual Step Up walk to fund inclusive activities and educational programming that supports the community around those with Down Syndrome. The walk takes place from 10:30 a.m. to 2 p.m. on Oct. 5, and De Paula has encouraged those interested to register online.