Already a productive player for the Plano Wildcats program on the field, deaf athlete is also inspiring others off the field

The noises and sounds of high school football on Friday nights in North Texas are unmistakable, but for Plano defensive lineman Andrew Suarez, it’s the sights and mentality that comes with playing the game he loves that has made football unmatched.

"I love the intensity, the feeling inside your heart," Suarez said. "It's fun. It’s hard work, but it pays off."

Extra hard work for the Wildcats junior is paying off in more ways than just success on the football field. Andrew is deaf, using an interpreter provided by Plano High School to communicate before, during and after games.

"I have to focus and watch, I'm visually (dependent) all the time," Suarez said through a sign language interpreter. "It's kind of nice to have 'hearing friends' now. It's the first time I've ever had that." 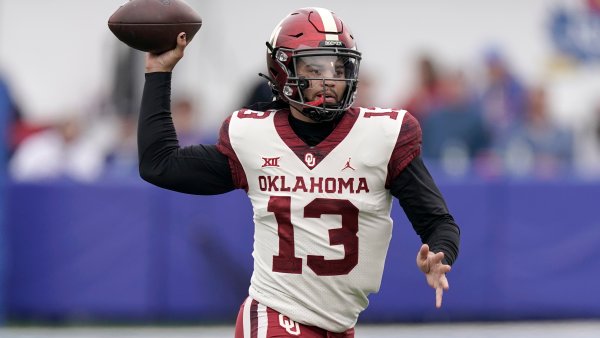 No. 3 Oklahoma Holds Off Kansas 35-23 Behind Williams' Runs

His first 'hearing friends' after a life that began with a hearing impairment diagnosis immediately after birth, and a childhood that almost always revealed a kid not afraid to challenge preconceived limitations usually assigned to those unable to hear.

"When someone tells him he can't do something he fights harder to do it to make sure that he's just the same as everyone else," said Andrew's mother Sheryl Suarez. "He doesn't want to be looked at as different."

Which is why Andrew, who looks the part of a high school football defensive lineman, was open to the idea of joining the Wildcats program, making a big impression on his first day.

"He was kind of like a bull in a china closet," said Plano High School football coach Todd Ford. "He was running around crazy everywhere and he was hitting and had unbelievable effort and intensity and he really, really cared. It left a mark on us and we knew ultimately he was going to be a productive player in our program and he already is."

Already a productive player for the Wildcats program on the field, and inspiring others watching him from the stands, including members of the Dallas Hearing Foundation – an organization dedicated to helping kids with hearing loss – cheering him on as he continues to break down barriers.

"It makes me so proud not only that he's achieving overcoming adversity, but he's inspiring others to do the same," said Andrew’s father Kelvin Suarez.

Inspiring others, but also his Plano High School teammates, who have embraced Andrew, going out of their way to make sure he feels included in every aspect of being a Wildcat.

"Every time we see the kids giving him high fives and participating with signing and helping him out, we just get so excited," said Sheryl.

"It's really cool for us to see in our program how they've welcomed Andrew and his disability, but also made him feel extremely welcome," said Coach Ford. "That makes us feel good because it's a great story."

A great story about a kid experiencing the greatness of Texas high school football, unable to hear the sounds that are unmistakable on Friday nights, but embracing the sights and the mentality that comes with playing the game he has learned to love.

"Don't be scared because I'm deaf," Andrew said. "I want to challenge, I want to hit, I want to practice. Nobody is going to hurt my feelings or me. I'm just going to go out there, do my job and go out there and work."