The loss ended a six-game winning streak for Dallas

Jonathon Cooper and the Denver defense pestered Dak Prescott a lot more than the rookie's first two sacks in the NFL showed.

The final score wasn't much of a reflection of the Broncos' dominance either.

Teddy Bridgewater threw for a touchdown and had a sneak for another, and the Broncos stymied the NFL's No. 1 offense when it mattered in a 30-16 victory Sunday, ending the Cowboys' six-game winning streak.

Prescott returned after missing a game with a strained right calf but couldn't get the Cowboys (6-2) moving until two meaningless late touchdowns that merely avoided what would have been their worst shutout loss at home since 1985. 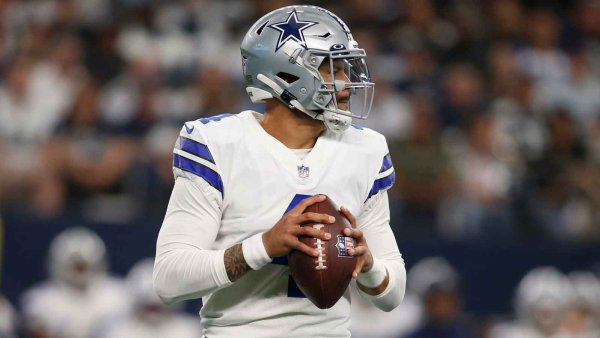 What to Know as Cowboys Seek First Road Win vs. Saints Since 2009

"Those guys had the right mindset, which you have to when you're playing against an offense that's that good," Denver coach Vic Fangio said. "They bought into what we had to do to have a chance to slow them down. We did more than slow them down."

From Dak Prescott's first game back from a calf injury to penalties, turnovers and a bevy of other mishaps, NBC 5's Pat Doney breaks down what you need to know after the Cowboys' home loss to the Broncos on Sunday.

Denver also began without left tackle Garett Bowles (ankle) and lost right tackle Bobby Massie and right guard Graham Glasgow to ankle injuries. Glasgow was taken off on a cart with an air cast on his lower left leg on the final play of the first half.

Still, the Broncos got their offense moving with the running game. They handed Dallas its first double-digit deficit of the season at 13-0 on Bridgewater's 41-yard touchdown pass to Tim Patrick, who beat NFL interceptions leader Trevon Diggs at the goal line.

The lead reached 30-0 in the Broncos' seventh consecutive victory in the series, a streak that goes back to 1995. Prescott threw two touchdown passes to Malik Turner in the final five minutes.

"The message is don't take the cheese, and frankly we were outcoached, we were outplayed all the way through," Dallas coach Mike McCarthy said. "This is the first time I've felt clearly our energy didn't exceed our opponent. That's disappointing."

Even when the frustrated Cowboys thought they had something going right, they didn't. Turner blocked a punt to start the second half, but Dallas didn't take over inside the Denver 20 because rookie Nahshon Wright touched the loose ball beyond the line of scrimmage and Denver recovered.

The Broncos got to start over at their 19 and drove to a 19-0 lead on the last of three field goals from Brandon McManus, who earlier had bounced back from his first missed extra point of the season to nail a 53-yarder.

The Cowboys were 0 for 4 on fourth downs, including failures on their first two possessions. Receiver Amari Cooper had his first drop of the season to force one of those failed fourth downs and Dallas finished with a season-low 290 yards -- about half with the game decided.

"You take the field with a little anger, honestly," Bridgewater said, referring to Dallas' early fourth-down tries. "They're saying our offense is not going to score. We talked about it in the huddle and we used it as motivation."

Prescott, the NFL leader in completion percentage at better than 73%, was 19 of 39 for 232 yards as his franchise-best, four-game run with at least three touchdown passes ended.

Bridgewater finished 19 of 28 for 249 yards with several big throws that helped the Broncos convert 8 of 15 third downs.

Javonte Williams had 17 carries for 111 yards, including a 20-yarder to kick-start Denver's first scoring drive, which ended on Melvin Gordon's 3-yard run. Gordon had 80 yards as the Broncos ran for 190 against the league's sixth-best run defense.

PREGAME COVID-19 SCARE
Denver had a pregame scare when quarterback Drew Lock was ruled out because of COVID-19 protocols, and there was an error in Bridgewater's test that forced him to delay his warmup routine. Ultimately, the Broncos didn't lose anyone else for the same reason and managed multiple lineup changes for injuries.

Patrick, who had four catches for 85 yards, was helped off after an incompletion in the third quarter. Defensive tackle McTelvin Agim didn't return after injuring a knee, and rookie cornerback and first-round pick Pat Surtain II also injured a knee.

SLOWED ELLIOTT
Cowboys running back Ezekiel Elliott appeared slowed by a right knee injury that has bothered him this season. He limped off after one of his 10 carries (for 51 yards) and went to the sideline again a play after taking a screen pass 21 yards. Elliott was still playing with the game out of reach late. When he wasn't playing, Elliott had a large covering on the knee.

"Something I've been dealing with the past couple of weeks," he said. "It helped to just keep it warm."

ANOTHER LINE SHUFFLE
The Cowboys also had a retooled offensive line with left tackle Tyron Smith (ankle) inactive. Terence Steele moved across the line to his spot and RT La'el Collins started for the first time since the opener. Collins didn't get his job back from Steele after serving a five-game suspension for violating the NFL's substance-abuse policy.

UP NEXT
Broncos: Denver tries to go 3 for 3 in consecutive weeks against the NFC East. After beating Washington and Dallas, the Broncos get Philadelphia at home next Sunday.

Cowboys: Atlanta at home next Sunday.