After 16 years representing people in parts of Tarrant, Denton and Dallas counties, Republican Congressman Kenny Marchant is stepping down, leaving the seat open and primed for a flip.

Tuesday night, 12 candidates, both Democrat and Republican, will have their first fight in the battle for Marchant's District 24 seat -- five of the Democrats them sat down with NBC 5 and a portion of their interviews can be seen below where the candidates share their takes on healthcare, immigration and divisiveness.

For more on the Republicans in the race, click here.

Jan McDowell came close to taking the seat in 2018, losing to Marchant by just 8,000 votes. She also ran against the Congressman in 2016.

She said she believes there’s a frustration with the last political cycle that will turn the district blue.

“Now we’re seeing that we clearly haven’t done enough yet and are motivated to take that forward because we need to make more changes to preserve our democracy,” McDowell said.

Among McDowell’s priorities are putting protections in place for the environment by turning America’s reliance on fossil fuels into one on renewable sources. She’s also stated her support for a Medicare-for-all approach.

Neuroscientist John Biggan is also a repeat visitor to the District 24 race.

Biggan’s pushing to become the second scientist in Congress after learning about what he calls massive cuts to the National Institute of Health, the National Science Foundation. the Centers for Disease Control and Prevention and the Department of Energy.

“Forty years ago, we were the leaders in the world per capita per spending on research and development. Today we’re tenth. That is going to make it harder for us to advance. It’s going to hurt our economy, and it’s going to make our healthcare system not as good as it could be,” Biggan said.

A sixth-generation resident of Dist. 24, former school board member and small business owner Richard Fleming is running on matters he says matter to most everyday people.

Though new to the race, Richard Fleming’s not new to politics.

The small business owner has served on local boards including Carrollton-Farmer’s Branch ISDs.

He said the catalyst that pushed him into the race was the divisiveness that plagues American politics.

“It’s once you establish that rapport, establish that relationship and the only thing that’s going to divide us is going to be partisan. I think that’s where we’ve got to come together in the middle and have a give or take. And at the end of the day, we have to do what’s best for the American people. Not the party,” said Fleming.

After watching a young family member deal with crippling medical bills while battling AIDS, Fleming said he wants to see quality affordable healthcare for all regardless of pre-existing conditions.

After serving as one of the first generations of female pilots and later veterans, Kim Olson is running to serve her district.

Kim Olson has received several of the race’s endorsements.

She said her experience as one of the United State’s Air Force's first generation of female pilots has prepared her to work in a Congress dominated by men.

“I have a long history of working within bureaucracies that have not been easy to bend and change, and that’s what I think is happening today within our U.S. House and our political structure. We need folks who are leaders and bring in substantive changes that are needed by our American people,” said Olson.

When it comes to immigration, Olson said she wants to find a way to allow asylum seekers in while targeting the problem with a Marshall Plan in Central America.

Sam Vega is running with no political experience. He jumped in the race after seeing there were no candidates whose ideas aligned with his.

Sam Vega was the last to jump into the race.

He has no political experience and said a disconnect with those running inspired him to campaign on the idea of Medicare-for-all.

“It’s wrong when we live in the richest nation in the world when we actually have the means to take care of each other,” Vega said.

Candace Valenzuela and Crystal Fletcher are also on the ticket.

Fletcher, a former school board member in the Carrollton-Farmers Branch ISD, was unavailable for an interview. She said she's running for Congress to stand up for all Texas children and their families.

To win Tuesday’s primary, one candidate will have to win at least 50.1% of the vote. If that doesn’t happen, the top two candidates will face off in a runoff election on May 26.

Click here to read more about the Republican candidates for House District 24. 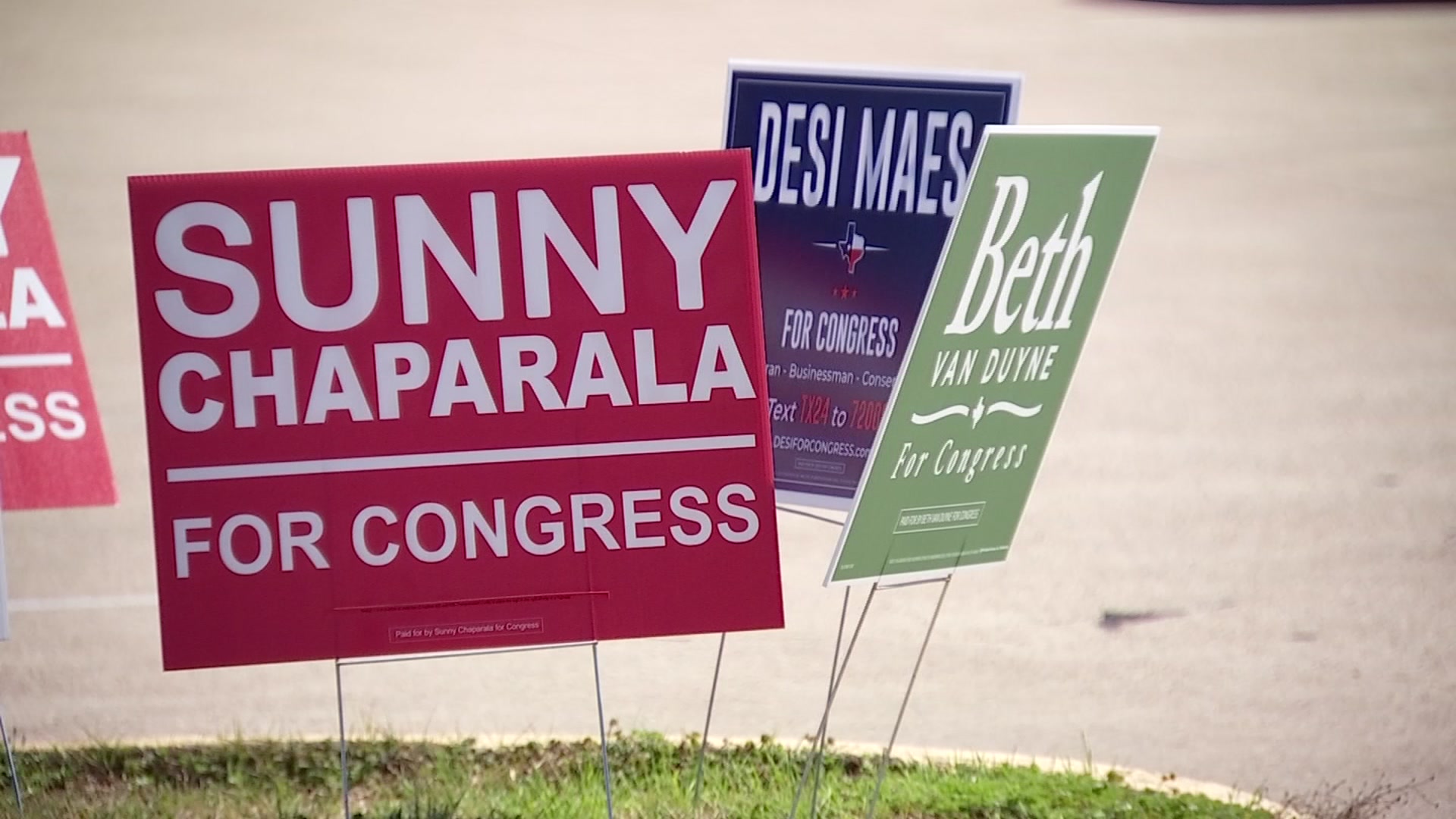