Dole Honored in Kansas as Tough But Compassionate Statesman

Fellow Kansans on Saturday celebrated Bob Dole as a tough but compassionate patriot shaped by small-town values, a strong partisan leader who could nevertheless work with political opponents, and a war hero who ultimately became “the greatest of the Greatest Generation.”

Dole made his last journey to his prairie state for memorial services in his western Kansas hometown of Russell and at the Statehouse in Topeka. He was honored for the military service during World War II that left him severely wounded and the distinguished political careerthat followed his recovery.

Elected officials and former elected officials from both parties said Dole embodied the state's motto, “To the stars through difficulties,” and never stopped trying to help others.

“He did not hide in a time of crisis. He looked for solutions,” former U.S. Rep. Jim Slattery, a Kansas Democrat, said during the Statehouse event. ”I often told Bob he was the toughest man I ever knew, both physically and mentally, but he had a tender heart." 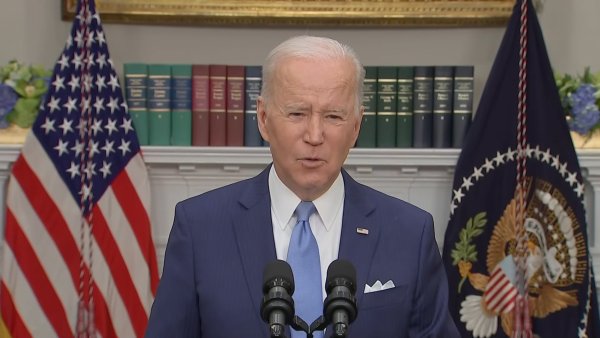 Biden Will Nominate a Black Woman to the Supreme Court

Dole died Sunday at the age of 98 after a lifetime of service that included nearly 36 years in Congress and running as the GOP nominee for president in 1996. U.S. Senate Minority Leader Mitch McConnell, who served more than a decade with Dole in the Senate and later surpassed Dole as the longest-serving GOP leader there, attended both Kansas events as well.

Saturday's events began with a public viewing of his casket and a memorial service at a Roman Catholic church in Russell, the small town some 240 miles (386 kilometers) west of Kansas City where he grew up during the Great Depression. Speakers for the state capital event Saturday afternoon noted that Dole’s career in elective office began in the Kansas House in the early 1950s.

Kelly said in remarks in Dole's hometown that Russell was “where his roots run deepest.” Dignitaries in dark, formal business attire mixed in the congregation with local residents dressed in less formal farm and work clothes, a KWCH-TV livestream showed.

“As we gather here today to come together to salute our state’s most favorite of favorite sons and the greatest of the Greatest Generation, we pause to reflect with immense gratitude on all that Bob Dole's life meant to Kansas and to Kansans, to our nation and to the world,” Kelly said.

Dole — known for a caustic wit that he sometimes turned on himself — also was honored Friday during a service at Washington National Cathedral. President Joe Biden was among the speakers there. Another tribute followed at the World War II Memorial in Washington — a monument to Dole’s generation that he worked to get built.

Dole became known as a congressional leader who could bridge partisan divides to pass legislation such as the landmark Americans with Disabilities Act aimed at preventing discrimination on the basis of disability. In Russell, Moran attributed that ability to Dole’s ties to a small town, where people who disagree on politics still mix in their daily lives.

Speakers also pleaded for more civility in politics, with Kelly calling on her Statehouse audience to “pledge ourselves to be more like Bob Dole.”

Moran added: “Think of all the things he's been through and how hope had to be so important to his life to get through the day."

Dole will be buried in Arlington National Cemetery, but his casket was flown Friday evening to Salina, Kansas, then transported 70 miles (113 kilometers) west to his boyhood hometown, which now has about 4,400 residents.

Oil production allowed Russell to boom when Dole was growing up, even during the Great Depression, with the first local well drilled in 1923, the year he was born. In Russell, Moran quoted Dole's speech accepting the 1996 presidential nomination, in which Dole said, "the first thing you learn on the prairie is the relative size of a man compared to the lay of the land.”

“His family and this community endured the Dust Bowl of the Great Depression,” Moran said. “In Russell, you could feel and see the challenges, the obstacles, the barriers that were put in people’s lives. Nothing was easy.”