Kentucky Funeral Home Prepares for Burial of Tornado Victims, Including 2 of Its Own

Tight-knit communities still digging out from the deadly tornadoes that killed dozens of people across eight states in the South and Midwest are turning to another heavy-hearted task: honoring and burying their dead.

The storms that began Friday night destroyed lives and property from Arkansas to Illinois and in parts of neighboring states, carving a more than 200-mile (320-kilometer) path through Kentucky alone. The National Weather Service recorded at least 41 tornadoes, including 16 in Tennessee and eight in Kentucky.

Along the violent storm path, a funeral home in western Kentucky prepared to welcome the families of those who lost loved ones while grieving losses of its own.

Beshear Funeral Home in Dawson Springs was preparing for at least four services in coming days for storm victims and has to catch up on funerals delayed by the massive storm, said funeral home owner Jenny Beshear Sewell, a cousin of Kentucky's governor.

The storm-related deaths include those of two sisters who had worked at the funeral home, the only one in the small western Kentucky town.

Eighty-year-old Carole Grisham and 72-year-old Marsha Hall decided to “ride it out” in their home as the tornado barreled down in the dark of night, Sewell said by phone Wednesday. The home, which lacked a basement, was demolished.

Climate change may not be increasing the number of tornadoes, but some parts of the country are seeing tornado-friendly conditions more often than in the past. NBCLX Storyteller Chase Cain explains the science behind the climate shift after a destructive storm spawned several tornadoes that destroyed parts of Kentucky, Arkansas and Missouri.

Hall, a fixture at the funeral home, had a hard day's work Friday, hours before she died in the storm, Sewell said. As she left work, Hall's parting words were: "‘Well, I’ll see you.”

As the tornado approached, Sewell texted Hall with an update on the storm’s path and urged the sisters to shelter in the funeral home’s basement or a church basement. Hall replied “OK” to a text — the last she heard from the longtime employee she considered a member of the family.

But the business of laying the dead to rest won't wait. A service at the funeral home was being planned for Friday for a woman whose funeral was delayed since last Saturday, the day after the storm hit. If the building's natural gas hasn’t been restored once services resume, “everybody will just need to bundle up. But that’s the best we can do,” Sewell said.

Arrangements were still pending for Grisham and Hall, but a double funeral is expected, Sewell said.

Kentucky Gov. Andy Beshear has pledged $5,000 payments to each of the victims' families to help with burial expenses. The state was the hardest hit with 74 deaths reported so far. 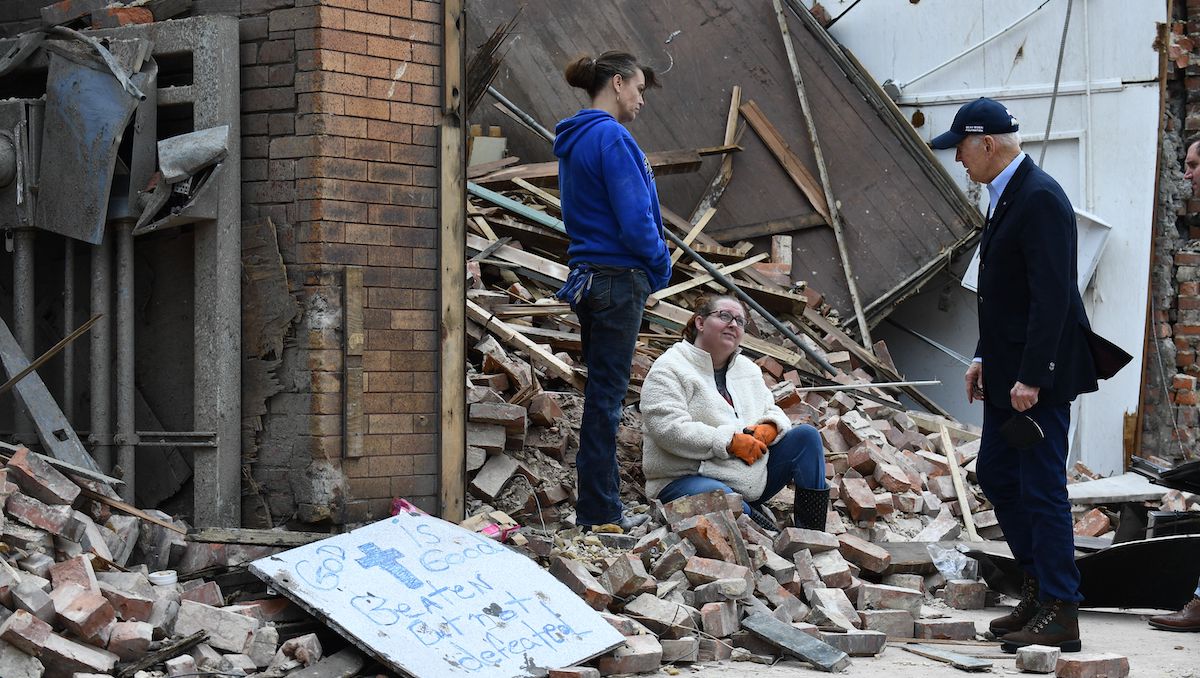 Biden Pledges ‘Whatever It Takes' to Assist Tornado Victims 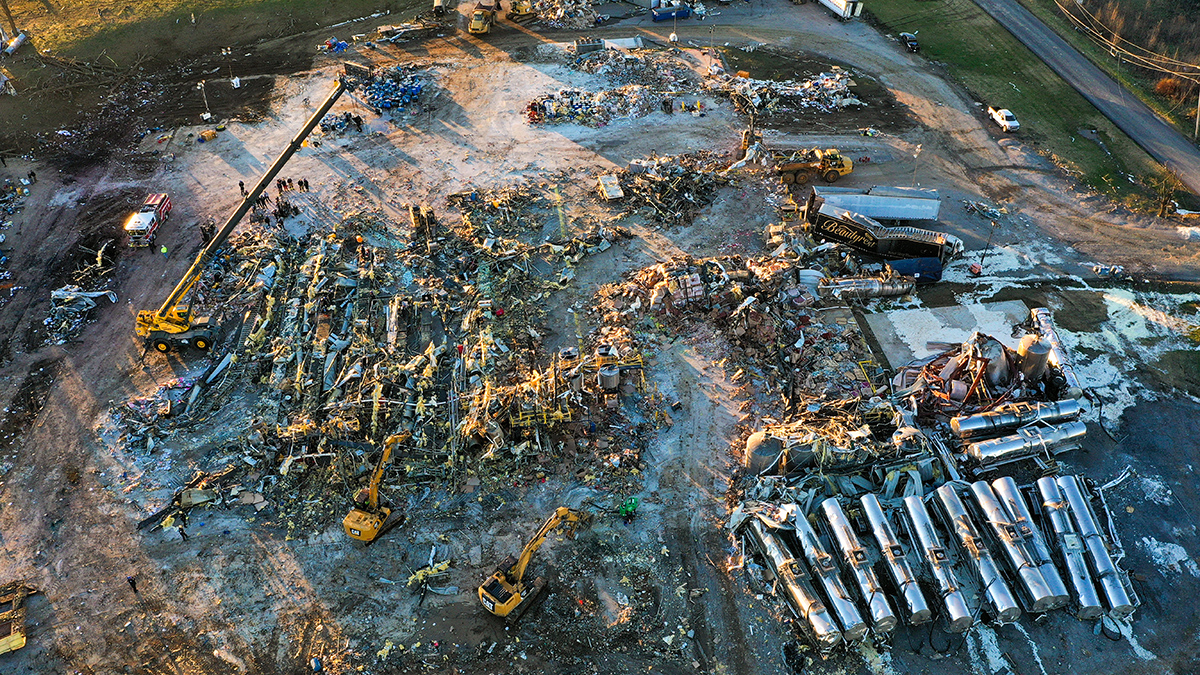 In the western Kentucky town of Madisonville, family and friends on Wednesday mourned a couple killed when the twister ripped through nearby Dawson Springs.

Jeffrey Eckert, 70, was remembered as “mysterious and cool" by his nephew, Mike Eckert, who recalled his uncle playing in various bands, always owning a boat and buzzing his home after he'd earned his pilot's license to let the family know it was time to meet him at the airport.

Many of the mourners wore animal prints in honor of Jeffrey Eckert's wife, Jennifer Eckert, 69, who loved to wear them and was remembered by her niece, Kathy Moore, for her chocolate merengue pies and the love of her grandchildren.

Moore said her grief was tempered by the memories and the relationships Jennifer Eckert left behind.

“When it's all said and done, relationships are all that matters," Moore said. “Life has to end. Love does not."

The grieving, meanwhile, has extended beyond the states hardest hit and into Florida, the home of a father and son killed while staying at a west Tennessee resort.

Steve Gunn and his 12-year-old son Grayson were staying at the Cypress Point Resort, a popular destination for hunters and anglers. They will be buried in Florida this weekend.

“You couldn’t go to Walmart with him without a hundred people stopping him," said his sister, Sandy Gunn. “His son was the kid you grew up dreaming to have.”

Her brother-in-law, Jamie Hall, also was part of the hunting group and remains missing.

“Our world has been shattered,” she said. “I’m terrified each time I hear the phone ring. My brother in law was the kindest and most gentle man you would have ever known.”

In Mayfield, a vigil was held earlier this week for the victims of a Kentucky candle factory flattened by a tornado. A deputy jailer, Robert Daniel, who was escorting a group of inmates working at the factory, was one of the eight victims. He will be buried Saturday.

Across town at the heavily damaged courthouse in downtown Mayfield, Makayla Wadkins, 24, helped set up a makeshift memorial. Flyers with color photographs and the names of victims were taped to the fence surrounding the building.

“We’re just going to allow the families to have a place to come where they can grieve and see their loved ones surrounded with flowers and beauty,” said Wadkins, from neighboring Kirksey.