“With this amount of damage and rubble, it may be a week or even more before we have a final count on the number of lost lives,” Gov. Andy Beshear said

Workers, volunteers and members of the National Guard fanned out in areas of Kentucky slammed by a series of tornadoes to begin the long process of recovery, including replacing thousands of damaged utility poles, delivering bottles of drinking water and continuing to search for the dead.

The tornado outbreak Friday that killed at least 88 people in five states — 74 of them in Kentucky — cut a path of damage that stretched from Arkansas, where a nursing home was destroyed, to Illinois, where an Amazon distribution center was heavily damaged.

In Kentucky, Gov. Andy Beshear said the death toll could grow as authorities continued to work around debris that slowed recovery efforts. Nearly 450 National Guard members have been mobilized in the state, and 95 of them are doing fatality searches.

“With this amount of damage and rubble, it may be a week or even more before we have a final count on the number of lost lives,” the governor said.

Kentucky authorities said the sheer level of destruction was hindering their ability to tally the damage. Still, efforts turned to repairing the power grid, sheltering those whose homes were destroyed and delivering supplies.

Tornadoes and severe weather caused catastrophic damage across multiple states late Friday, killing at least six people overnight as a storm system tore through a candle factory in Kentucky, an Amazon facility in Illinois and a nursing home in Arkansas. The Kentucky governor said he feared dozens more could be dead.

A fund set up by the state has collected $6 million in donations, according to the governor. Kentucky First Lady Britainy Beshear has launched a Christmas toy drive for children affected by the storm. She is asking for unwrapped toys, books and gift cards of $25 that will be distributed to families in need.

State and local officials said it could take years for some of the hardest-hit areas to fully recover.

“This again is not going to be a week or a month operation, folks. This will go on for years to come. This is a massive event,” Dossett said.

Five twisters hit Kentucky in all, including one with an extraordinarily long path of about 200 miles, authorities said. 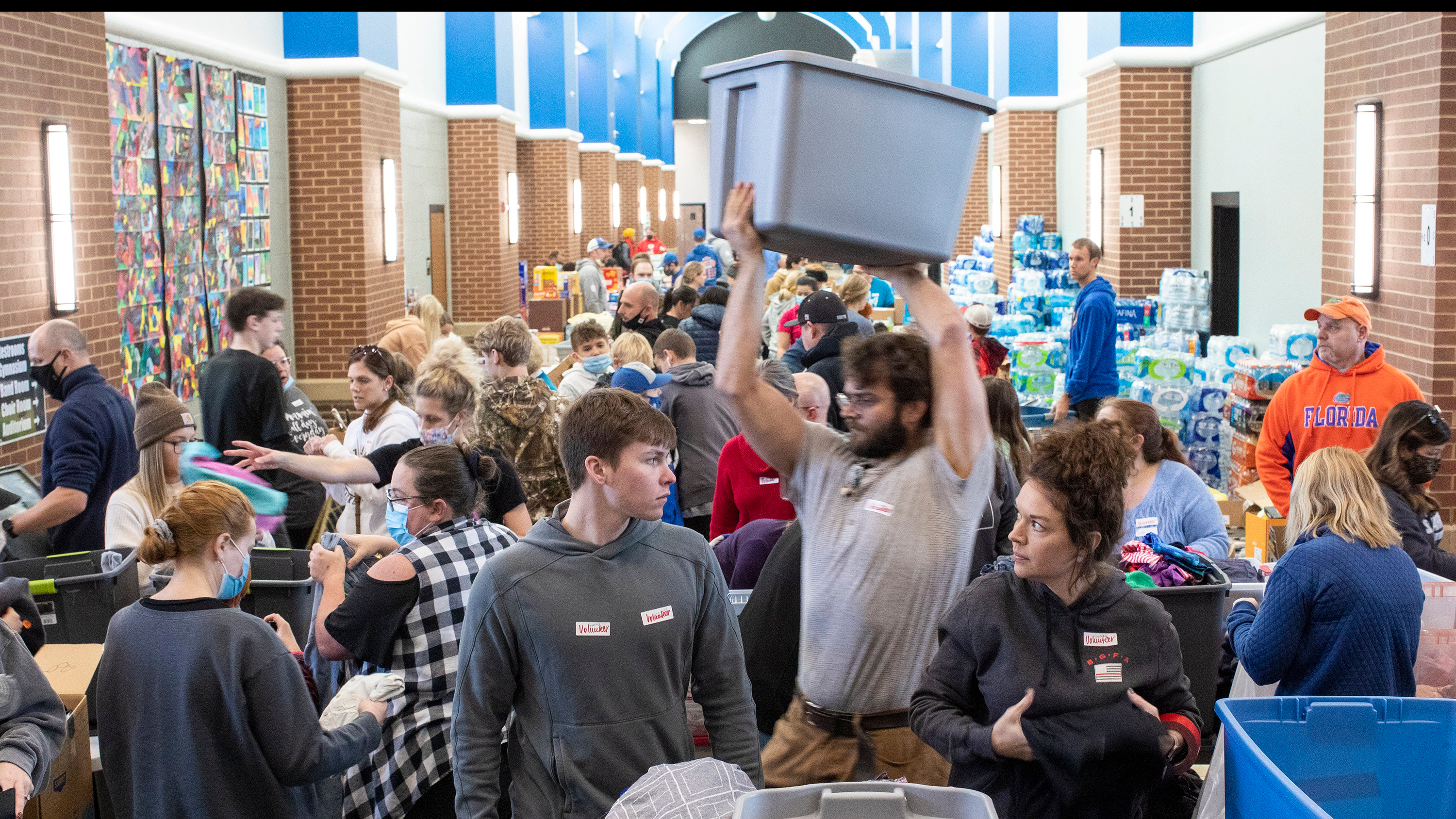 How to Help Tornado Victims in Kentucky and Other States Severe Tornadoes in December Are Rare. Did Climate Change Cause Friday's Disaster?

In addition to the deaths in Kentucky, the tornadoes also killed at least six people in Illinois, where the Amazon distribution center in Edwardsville was hit; four in Tennessee; two in Arkansas, where the nursing home was destroyed and the governor said workers shielded residents with their own bodies; and two in Missouri.

The federal Occupational Safety and Health Administration announced Monday that it has opened an investigation into the collapse of the Amazon warehouse in Illinois.

Mayfield, home to 10,000, suffered some of the worst damage. Debris from destroyed buildings and shredded trees covered the ground in the city. Twisted sheet metal, downed power lines and wrecked vehicles lined the streets. Windows were blown out and roofs torn off the buildings that were still standing.

Not far from Mayfield, a church serving as a shelter in Wingo said it expected to host more than 100 people Monday night.

Glynda Glover, 82, said she had no idea how long she would stay at the Wingo shelter: Her apartment is uninhabitable since the wind blew out the windows and covered her bed in glass and asphalt.

“I’ll stay here until we get back to whatever normal is,” she said, “and I don’t know what normal is anymore.”

On the outskirts of Dawson Springs, another town devastated by the storms, homes were reduced to rubble and trees toppled, littering the landscape for a span of at least a mile. Jack Whitfield Jr., the Hopkins County judge-executive, estimated that more than 60% of the town, including hundreds of homes, was “beyond repair.”

“A full recovering is going to take years,” he said.

Tornadoes and severe weather caused catastrophic damage across multiple states late Friday, killing at least six people overnight as a storm system tore through a candle factory in Kentucky, an Amazon facility in Illinois and a nursing home in Arkansas. The Kentucky governor said he feared dozens more could be dead.
Copyright AP - Associated Press