Taliban Focus on Governing After US Withdrawal

The Taliban reveled in their victory after the American withdrawal from Afghanistan, reiterating their pledge Tuesday to bring peace and security to the country after decades of war. Their anxious citizens, meanwhile, are waiting to see what the new order looks like.

Having humbled the world’s most powerful military, the Taliban now face the challenge of governing a nation of 38 million people that relies heavily on international aid, and imposing some form of Islamic rule on a population that is far more educated and cosmopolitan than it was when the group last governed Afghanistan in the late 1990s.

Thousands who had worked with the U.S. and its allies, as well as up to 200 Americans, remained in the country after the massive airlift ended with the last U.S. soldiers flying out of Kabul international airport just before midnight Monday.

“Afghanistan is finally free,” Hekmatullah Wasiq, a top Taliban official, told The Associated Press on the tarmac. "Everything is peaceful. Everything is safe.”

He urged people to return to work and reiterated the Taliban's offer of amnesty to all Afghans who had fought against the group over the last 20 years. “People have to be patient,” he said. “Slowly we will get everything back to normal. It will take time.” 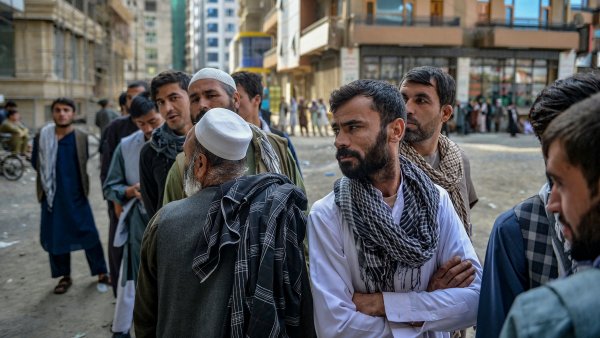 US Military Departs Kabul Leaving Some Americans, Many Afghans Behind 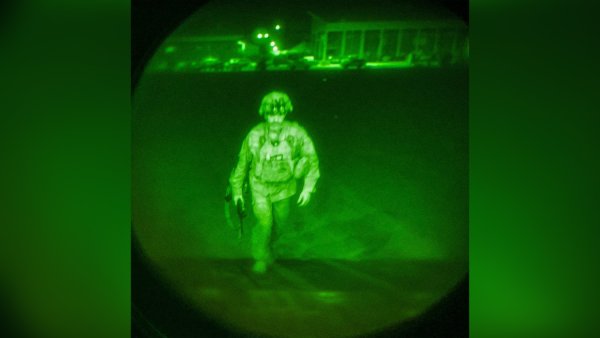 Army General Was the Last Soldier to Leave Afghanistan

A long-running economic crisis has worsened since the Taliban's rapid takeover of the country in mid-August, with people crowding banks to maximize their daily withdrawal limit of about $200. Civil servants haven't been paid in months and the local currency is losing value. Most of Afghanistan's foreign reserves are held abroad and currently frozen.

“We keep coming to work but we are not getting paid,” said Abdul Maqsood, a traffic police officer on duty near the airport. He said he hasn't received his salary in four months.

A major drought threatens the food supply, and thousands who fled during the Taliban's lightning advance remain in squalid camps.

“Afghanistan is on the brink of a humanitarian catastrophe,” said Ramiz Alakbarov, the local U.N. humanitarian coordinator. He said $1.3 billion is needed for aid efforts, only 39% of which has been received.

The challenges the Taliban face in reviving the economy could give Western nations leverage as they push the group to fulfill a pledge to allow free travel, form an inclusive government and guarantee women's rights. The Taliban say they want to have good relations with other countries, including the United States.

There are few signs of the draconian restrictions the Taliban imposed last time they were in power. Schools have reopened to boys and girls, though Taliban officials have said they will study separately. Women are out on the streets wearing Islamic headscarves — as they always have — rather than the all-encompassing burqa the Taliban required in the past.

“I am not afraid of the Taliban,” said Masooda, a fifth-grader, as she headed to school on Tuesday.

In this new era of rule in Afghanistan, "we can't be duped by the spin cycle of what the Taliban is saying that they are,"says Farah Pandith of the Council on Foreign Relations. She doesn't want the world to forget that women and girls will have a hard time in the new Afghanistan.

When the Taliban last ruled the country, from 1996 to 2001, they banned television, music and even photography, but there's no sign of that yet. TV stations are still operating normally and the Taliban fighters themselves can be seen taking selfies around Kabul.

On Tuesday, the sound of dance music trickled out of an upscale wedding hall in Kabul, where a celebration was in full swing inside.

Shadab Azimi, the 26-year-old manager, said at least seven wedding parties had been held since the Taliban takeover, with festivities moved to daytime because of security concerns. He said the Taliban have yet to announce any restrictions on music, but that wedding singers have canceled out of caution, forcing him to use tapes.

Azimi said a Taliban patrol stops by a couple times a day, but only to ask if he needs help with security. Unlike the now-disbanded police of the toppled, Western-backed government, the Taliban don't ask for bribes, he said.

“Former officials, including police officers, were always asking us for money and forcing us to host their friends for lunches and dinners,” he said. “This is one of the positive points of the Taliban.”

Abdul Waseeq, 25, runs a women's clothing shop in downtown Kabul selling Western-style jeans and jackets. The Taliban have left him alone, but his clientele seems to have vanished and he's concerned about the banking crisis.

“Most of our customers who were buying these kinds of clothes are gone, evacuated from Kabul," he said.

For now, the Taliban appear to be less interested in imposing restrictions on daily life than on getting the country running again, a task that could prove challenging to fighters who have spent most of their lives waging an insurgency in the countryside.

Sharia means “Islamic law” and is a broad set of ethical principles drawn from the Quran. The Taliban has historically had an ultra-conservative interpretation of Sharia. Here’s what it has entailed.

They are expected to focus on the Kabul airport, where scenes of desperation and horror played out for weeks as tens of thousands fled in a massive U.S.-led airlift.

Early Tuesday, the airport was littered with artifacts of the withdrawal. Inside the terminal were scattered piles of clothes, luggage and documents. Several CH-46 helicopters used by American forces were parked in a hangar. The U.S. military says it disabled 27 Humvees and 73 aircraft before leaving.

Taliban spokesman Zabihullah Mujahid said a “technical team” would survey the airport and try to restore normal operations, potentially requesting help from Qatar or Turkey, which have been involved in negotiations on running the airport going forward.

The Taliban have said they will allow people with legal documents to travel freely, but it remains to be seen whether any commercial airlines will be willing to offer service.

“I hope you will be very cautious in dealing with the nation," Mujahid said in a speech at the airport, addressing the Taliban fighters gathered there. "Our nation has suffered war and invasion, and the people do not have more tolerance.”

At the end of his remarks, the fighters shouted: “God is greatest!”

Despite billions of dollars in Western aid over the past two decades, more than half of Afghans survive on less than a dollar a day. For the poorest, the change from one ruling system to another hardly matters in their daily struggle to survive.

Sal Mohammad, 25, collects scrap metal and sells it to support his wife and 2-year-old daughter. On a good day, he makes about $5.

“I don't feel that anything has changed in my life since the Taliban took over Kabul," he said. "I don’t care about any of them, neither the Taliban, nor the government, nor the U.S. I would like peace in my country, nothing more.”