Harris will speak about security, economic partnerships and global health in the region

U.S. Vice President Kamala Harris delivered a sharp rebuke to China for its incursions in the South China Sea, warning its actions there amount to “coercion” and “intimidation” and affirming that the U.S. will support its allies in the region against Beijing’s advances.

“We know that Beijing continues to coerce, to intimidate and to make claims to the vast majority of the South China Sea,” she said in a major foreign policy speech Tuesday in Singapore in which she laid out the Biden administration’s vision for the Indo-Pacific. “Beijing’s actions continue to undermine the rules-based order and threaten the sovereignty of nations.”

The speech sought to cement the U.S. commitment to supporting its allies in an area of growing importance to the Biden administration, which has made countering China’s influence globally a centerpiece of its foreign policy.

Harris, who is on a weeklong swing through Southeast Asia, declared that the U.S. “stands with our allies and our partners" in the face of threats from China. 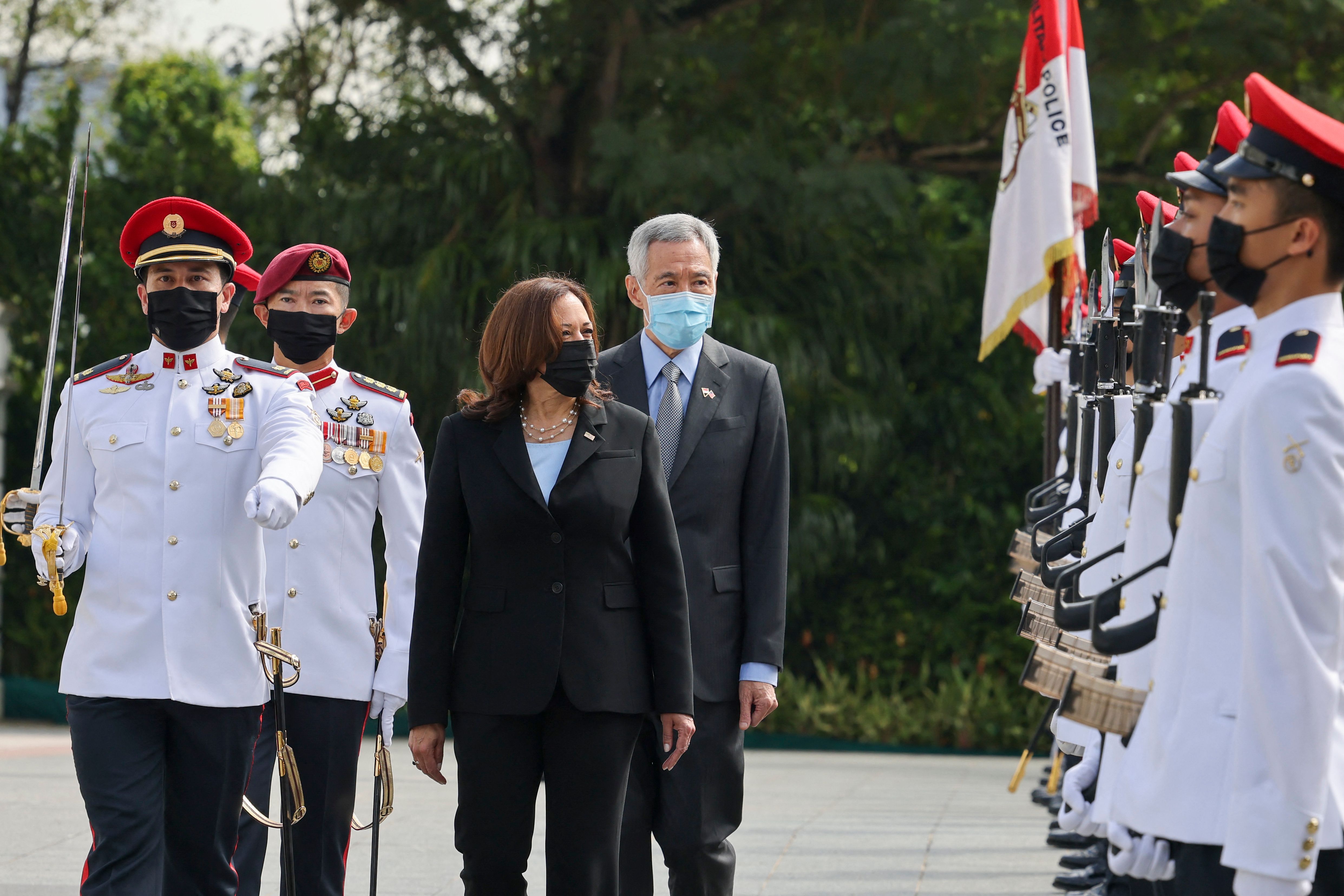 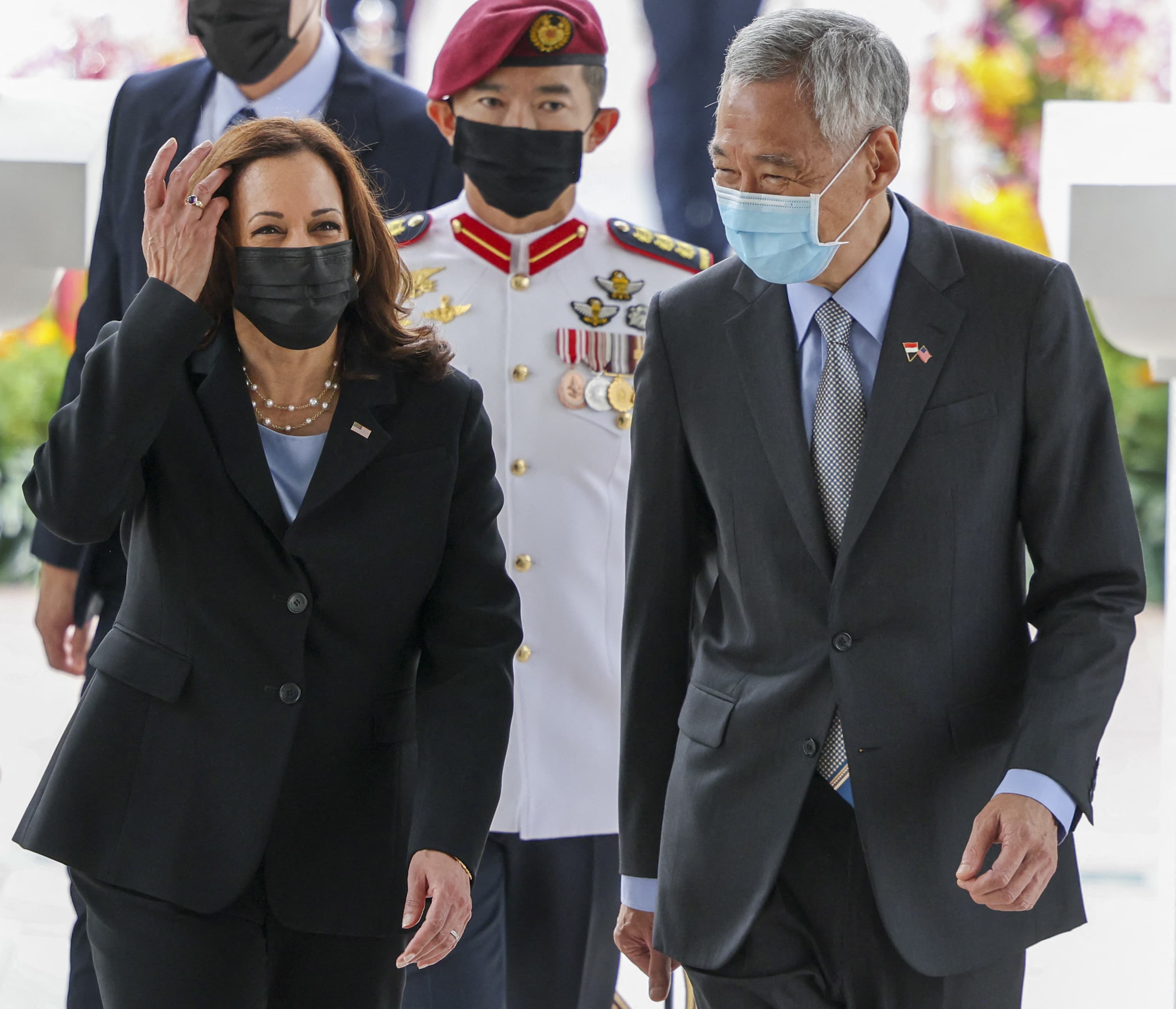 The address Tuesday morning at Singapore’s iconic Gardens by the Bay waterfront park offered an opportunity for the former state attorney general and U.S. senator to prove her fluidity with diplomatic and security issues.

Harris' remarks also come during a critical moment for the United States as the Biden administration seeks to further solidify its pivot towards Asia while America’s decades-long focus on the Middle East comes to a messy end with the chaotic withdrawal from Afghanistan.

Harris' remarks echoed and expanded uponremarks she delivered at the U.S. Naval Academy graduation in June, where she described a world that is “interconnected," “interdependent” and “fragile.”

On Monday, Harris told sailors aboard a U.S. combat ship at the Changi naval base in Singapore that “a big part of the history of the 21st century will be written about this very region” and that their work defending the region was pivotal.

"It is in our vital interest to stand united with our allies and our partners in Southeast Asia in defense of a free and open Indo-Pacific," she said.

After her speech Tuesday, Harris will hold a roundtable discussion with business leaders on supply chain issues, and then travel to Vietnam, where she’ll meet with top officials Wednesday.

President Joe Biden himself has repeatedly emphasized his focus on China as one of America’s main adversaries, pledging in a February speech at the State Department to “confront China’s economic abuses; counter its aggressive, coercive action; to push back on China’s attack on human rights, intellectual property, and global governance” — a message he echoed again later that month to European allies at the virtual G7 Summit and Munich Security Conference.

And in recent months, his administration has ramped up outreach to the Indo-Pacific region, with Defense Secretary Lloyd Austin and Deputy Secretary of State Wendy Austin both visiting the area in the spring and summer. Secretary of State Antony Blinken also held a number of virtual meetings with Southeast Asian officials earlier this month.

The chaotic U.S. withdrawal from Afghanistan, however, complicated that message of support to the region, raising questions about the U.S. commitment to its allies. While Biden said last week that an indefinite engagement would’ve benefited “true strategic competitors” China and Russia, China has seized on the images of violence from the evacuation to slam the U.S. for its engagement there.

Chinese Foreign Ministry spokesperson Wang Wenbin said Monday that the U.S. had done “unscrupulous and dishonest things” in Afghanistan and called on the nation to help rebuild.

“The United States is the root cause and the biggest external factor in the Afghan issue,” Wenbin said. “It cannot just run away like this.”

But Harris, during a joint news conference with Prime Minister Lee on Monday, said that her presence in the country, combined with the agreements around greater cooperation that the Biden administration has pursued with Indo-Pacific countries, speak “volumes in terms of the integrity of the relationships that the United States has around the world on many issues.”