At least five tornadoes were reported in the Metroplex in Tuesday's massive line of storms.

The twister registered winds of 95 to 105 mph, and left a 150-yard wide, half-mile-long path on the ground. Five homes and some apartments were damaged by the tornado. 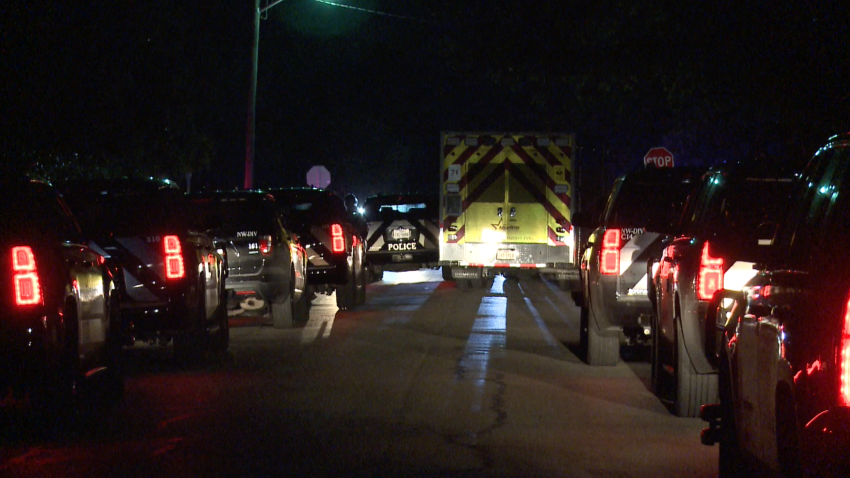 Police: Man Killed in Stabbing in Northwest Fort Worth

Mark Fox, a NWS meteorologist as he toured an apartment complex said the was "very good evidence of tornado damage all around."

But the NWS said it ruled reports of a tornado in the Dallas Love Field area as inconclusive, saying there were winds in the area of 85 to 90 mph.

A man found dead atop storm-related debris in Dallas was electrocuted by a downed power line, Dallas-Fire Rescue said Wednesday.

The man was found Wednesday morning by someone assessing storm damage for the Sycamore Tree Apartments in the 5000 block of Lahoma Street, Dallas Fire-Rescue spokesoman Jason Evans said.

The body was burned and lying on top of downed tree limbs. The Dallas County Medical Examiner's Office said electrocution from accidental contact with a downed power line was the cause of death.

Evans said the victim apparently decided to cross a safety perimeter. Firefighters set up "Fire Lane Do Not Cross" when they responded to a 911 call about downed power lines shortly after 10 p.m.

In Irving, police said an officer was hospitalized Wednesday after being struck by lightning while placing flares in the road at Loop 12 at Shady Grove. The name of the officer was not immediately released, but he was in good condition at the hospital Wednesday morning.

The American Red Cross said that more than 100 homes were damaged, most of which sustained minor damage. Two homes were destroyed in Dallas County and 32 homes in a Dallas apartment building had major damage.

A tornado was reported on the ground in Azle at about 7:45 p.m. Clerks at a convenience store in Azle said they saw rotation in the clouds and at least one tornado. Part of the store's roof was damaged in the storm.

Firefighters reported seeing two touchdowns near Blue Mound but no damage was reported.

Brief touchdowns were also reported in Corinth and Bedford.

Storm damage was reported in Argyle, where at least 10 homes were damaged. No injuries were reported.

Heavy rain and hail across North Texas were also reported in the storms, such as the baseball-sized hail in Euless and ping-pong-sized hail at Northwest Highway and Stemmons Freeway in Dallas.

It will cost thousands of dollars to repair hail damage to the Woodland Hills apartment complex.

Golf-ball- and baseball-sized hail broke more than 200 windows, damaged gutters and shattered the windshields of dozens of cars.

Many residents were planning to call their insurance adjusters to get their car windows replaced Wednesday.

Resident Traci Smiley placed blankets around her car windows to protect them from the hail and said it saved her car from severe damage.

It will take residents and the property owners days to fix the broken apartment windows.

Dallas/Fort Worth International Airport took tornado precautions shortly before 9 p.m. and pulled all passengers off planes. About 10,000 passengers were stranded at DFW Airport on Tuesday.

DFW Airport spokesman David Magana said about 200 departures were canceled Tuesday night. He said cots were made available to passengers for flights that were canceled or diverted and concession areas stayed open throughout the night. Magana said flight operations were returning to normal Wednesday, although 90 flights were canceled.

American Airlines spokesman Ed Martel said systemwide the airline had 719 cancellations with 325 of those flights being departures or arrivals at DFW Airport.

The game went into a rain delay in the fourth inning.

Oncor Electric Delivery reported more than 39,000 customers without power in the DFW area early Wednesday. Utility spokesman Ashley Burton said at the height of the storm 70,000 were without electricity.

In the Irving Independent School District Lamar Middle School was closed Wednesday after power crews could not restore power to the school.

There is a slight risk of a few severe storms on Wednesday, but those should stay well east of Dallas and Fort Worth.