Texas Gov. Greg Abbott (R) says the Texas Department of Public Safety and Texas National Guard have sealed the border in Del Rio where approximately 16,000 people, mostly Haitian refugees, have crossed into the United States from Mexico by walking over a dam in the Rio Grande River in the last week.

"They have created a steel barrier preventing people from being able to cross the border," Abbott said. "One day there were countless people coming across the border, then the DPS put up all these DPS vehicles, and suddenly, in an instant, people stopped crossing the border in this location. That strategy is working."

While most of the migrants have been staying under the international bridge, Abbott also said they are also arresting and jailing people who trespass onto private property or public land. The governor didn't specify how many migrants have been arrested under this policy.

"It's not the Biden Administration catch and release policy, it's the arrest and jail policy, sending a message to these folks and anybody thinking about coming here if they're thinking about coming and crossing this river here in Texas, that you may wind up with handcuffs on your hands going straight to jail as opposed to being released to the general population," Abbott said.

Texas Gov. Greg Abbott (R) says the border in Del Rio is sealed by a wall of vehicles, preventing more migrants from walking over a dam in the Rio Grande River and into the U.S.

The governor added that migrants are moving to other areas along the Rio Grande hoping to find places to cross into the United States and that he'll redistribute state resources into those areas to prevent crossings.

"Now that we have sealed this particular area of the border, we see the migrants now trying to penetrate other areas of the border. As a result, our strategies are shifting also," Abbott said, adding that the state will continue moving national guard and DPS officers to other areas to "reduce the unprecedented influx of people trying to cross the border."

The governor said a lack of action from the Biden Administration has forced Texas to spend $3 billion to address border security, adding that it's essential that Texas continue to face the challenges at the border to not only assist border patrol agents overcome by the influx of migrants but to also work to deny drug cartels easier passage into the state. 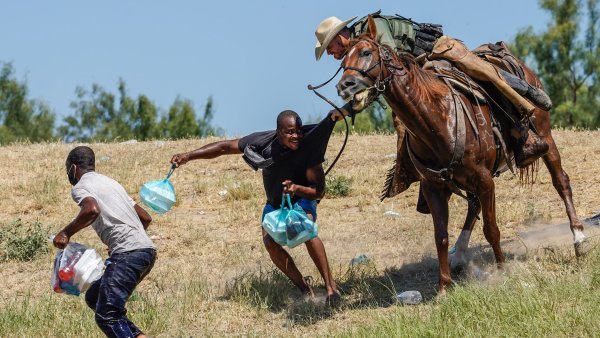 Brandon Judd, president of the Border Patrol Council, a labor union representing agents and staff of the US Border Patrol, said border patrol agents are overwhelmed and are suffering the consequences of not being provided with the personnel or resources needed to do their job.

Judd thanked Abbott for sending the DPS and Texas National Guard to the border to assist in the effort and said it could be a much different situation under the bridge if the DPS officers were not present.

"We saw something yesterday that we knew was going to happen. When those people that were in buses south of Kingsville, Texas, when they found out that they were going to be sent back to Haiti, they took the bus over and fled. If it wasn't for the men and women in uniform, the DPS officers, if it wasn't for that, we do not know what would happen right here under the bridge as word starts to spread that they could potentially be sent back to Haiti," Judd said.

Texas Gov. Greg Abbott (R) says the Texas Department of Public Safety and Texas National Guard have sealed the border in Del Rio where approximately 16,000 people, mostly Haitian refugees, have crossed into the United States from Mexico by walking over a dam in the Rio Grande River in the last week. Meredith Yeomans reports.

U.S. Immigration and Customs Enforcement said three migrants attempted to run from the bus, but were apprehended and returned to the bus, which made it to Brownsville without further incident.

"ICE fully respects the rights of all people to peacefully express their opinions, while continuing to perform its immigration enforcement mission consistent with our priorities, federal law and agency policy," an ICE spokesperson said in a statement.

More than 8,000 migrants, mostly Haitians, remain huddled under the bridge Tuesday waiting to be processed. For many that may mean being deported back to Haiti while others will be allowed to seek asylum or other forms of humanitarian protection.

Rose Pierre of the Haitian Social Circle in Dallas said the group is collecting donations so that they can head to Del Rio to provide toiletries, bedding and translation services.

The non-profit Dallas Haitians United plans to drive to Houston to help migrant couples and pregnant women being bussed there from Del Rio. The group is seeking volunteers fluent in Haitian Creole.

"So that we can welcome them and assure them that we are there with them. We are here to support them and treat them the way that they deserve to be treated in a humanly way," said Josephine Duviella-St. Surin, DHU president.

Most migrants arriving in Houston planned to stay with family members already in the U.S. until their court dates.

Abbott described the conditions under the bridge as a "man-made disaster of inhumanity of epic proportions" and blamed the Biden Administration directly for the crisis. The governor vowed to keep the pressure on as word another caravan of migrants was headed toward McAllen.

"Failure to enforce laws that exist in the United States leads to chaos and chaos leads to inhumanity," Abbott said. "It must end. It must end immediately. And the way to end it is by the Biden Administration stepping up and finally enforcing the immigration laws of the United States of America."

Abbott said they had been told by the federal government in February and March that they would be providing resources to prevent events like what's happened in Del Rio from taking place.

"All of those promises were never fulfilled," Abbott said. "As a result, it had to be the state of Texas … that steps up and provides the resources that are needed to staunch the flow of illegal immigration on our border and we will continue that effort."

Abbott said he has filed a request for a presidential disaster declaration for counties along the border but that as of Tuesday afternoon the Biden Administration has not yet replied to that request.

The governor, meanwhile, made no comments about a federal investigation into the border patrol's horseback patrol using split reins to deter migrants, leading to outrage from advocates and Haitian Americans.

White House press secretary Jen Psaki on Monday called pictures that appeared to show a U.S. Border Patrol agent on horseback using the reins like a whip to deter migrants "horrific," but declined to say what consequences there should be for the agent's actions.

Psaki said Tuesday the federal government was surging resources and food to the area while expediting repatriation flights to return migrants to their home countries.