'He Is Going to Change the World': Funeral Held for George Floyd

George Floyd was fondly remembered Tuesday as “Big Floyd” — a father and brother, athlete and neighborhood mentor, and now a catalyst for change — at a funeral for the black man whose death has sparked a global reckoning over police brutality and racial prejudice.

Hundreds of people lined the procession route for George Floyd on Tuesday. NBC 5’s Sophia Beausoleil was there and spoke to several people along the route.

More than 500 mourners wearing masks against the coronavirus packed a Houston church a little more than two weeks after Floyd was pinned to the pavement by a white Minneapolis police officer who put a knee on his neck for what prosecutors said was 8 minutes and 46 seconds.

Cellphone video of the encounter, including Floyd's pleas of “I can't breathe,” ignited protests and scattered violence across the U.S. and around the world, turning the 46-year-old Floyd — a man who in life was little known beyond the public housing project where he was raised in Houston’s Third Ward — into a worldwide symbol of injustice. 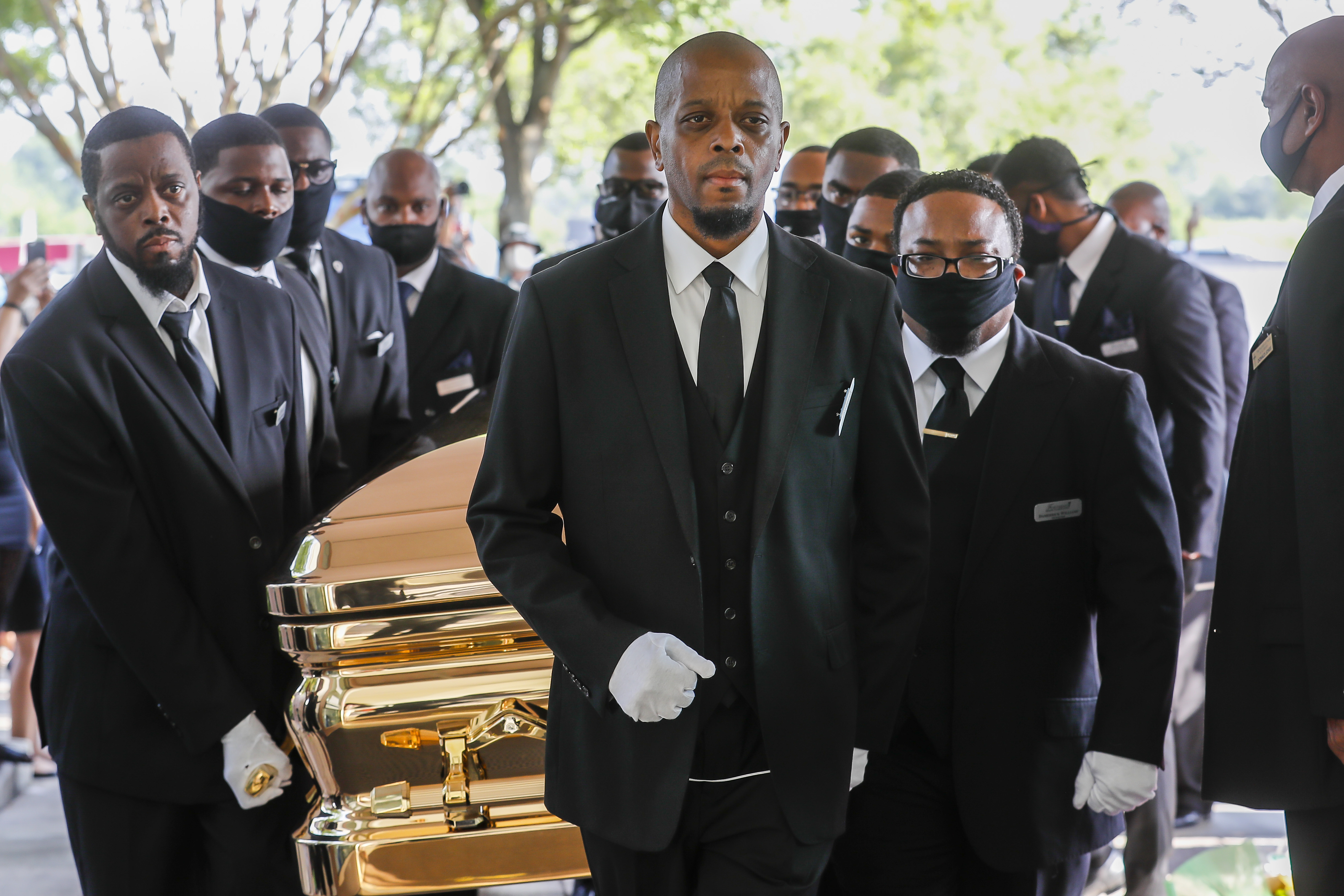 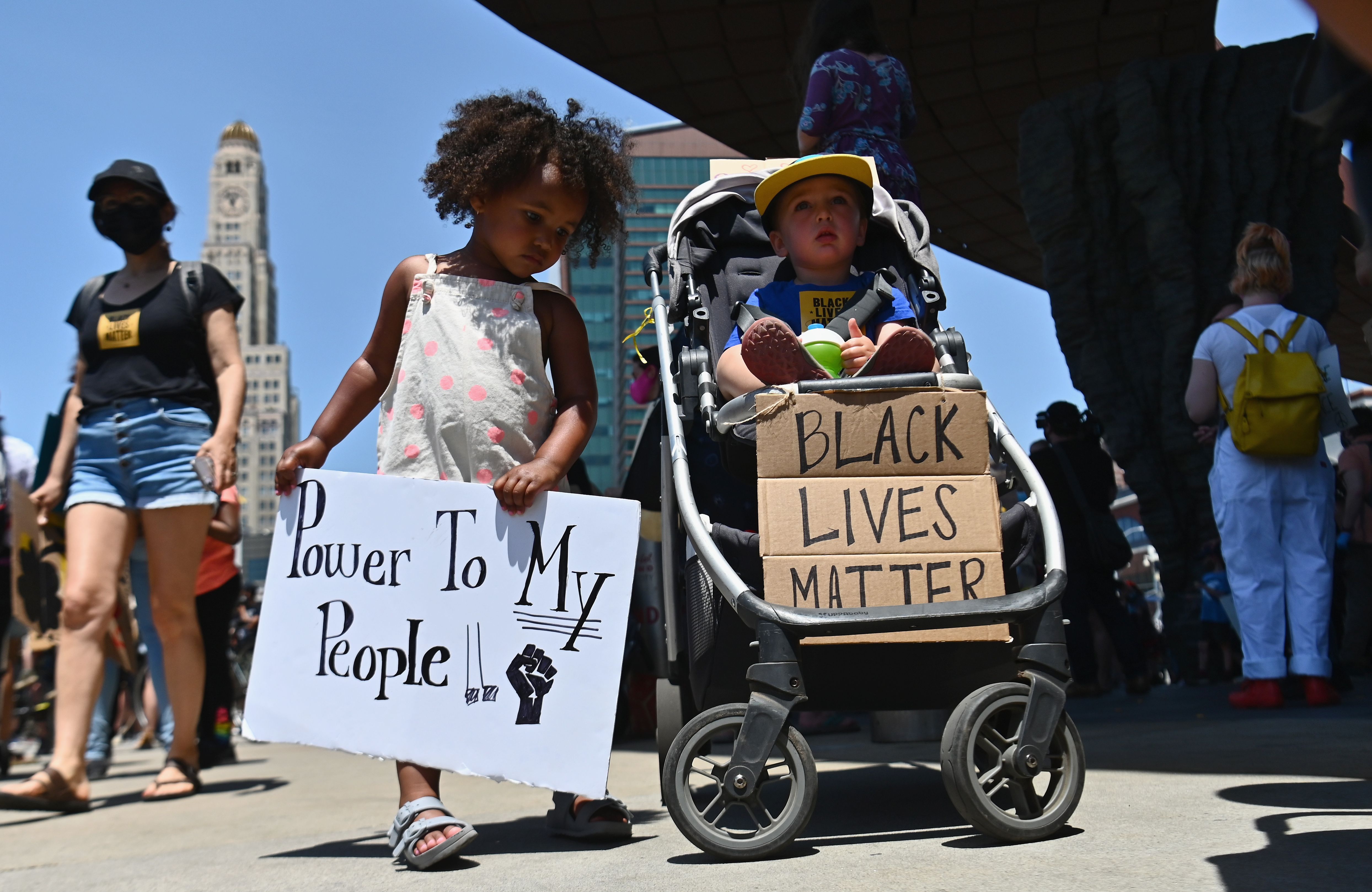 “Third Ward, Cuney Homes, that's where he was born at," Floyd's brother, Rodney, told mourners at the Fountain of Praise church. “But everybody is going to remember him around the world. He is going to change the world.”

The funeral capped six days of mourning for Floyd in three cities: Raeford, North Carolina, near where he was born, Houston, where he grew up, and Minneapolis, where he died. The memorials have drawn the families of other black victims whose names have become familiar in the debate over race and justice — among them, Eric Garner, Michael Brown, Ahmaud Arbery and Trayvon Martin.

A celebration of life was held for George Floyd Tuesday in Houston, two weeks after he died while in Minneapolis police custody. NBC 5’s Brian Curtis reports from outside the church.

Following the service, Floyd’s casket was taken by hearse to the cemetery in the Houston suburb of Pearland where he will be entombed next to his mother, for whom he cried out as he lay dying. A mile from the graveyard, the casket was transferred to a glass-sided carriage drawn by a pair of white horses.

Hundreds gathered along the procession route and outside the cemetery entrance in the mid-90s heat.

George Floyd's passing is being memorialized by an iconic street artist who's already painted beloved street murals of Barack and Michelle Obama along a famous Houston breakfast spot dubbed "The Breakfast Klub."

“I don’t want to see any black man, any man, but most definitely not a black man sitting on the ground in the hands of bad police," said Marcus Brooks, 47, who set up a tent with other graduates of Jack Yates High School, Floyd’s alma mater.

In the past two weeks, amid the furor over Floyd’s death, sweeping and previously unthinkable things have taken place: Confederate statues have been toppled, and many cities are debating overhauling, dismantling or cutting funding for police departments. Authorities in some places have barred police from using chokeholds or are otherwise rethinking policies on the use of force.

Dozens of Floyd’s family members, most dressed in white, took part in the four-hour service. Grammy-winning singer Ne-Yo was among those who sang.

Houston on Monday mourned George Floyd with an afternoon public viewing and an evening vigil as his death two weeks ago at the hands of police continues driving protesters, leaders and cities around the world into action over demands to address racial injustice and police brutality.

"I know you have a lot of questions that no child should have to ask, questions that too many black children have had to ask for generations: Why? Why is Daddy gone?” former Vice President Joe Biden, the Democratic presidential candidate, said, addressing Floyd's 6-year-old daughter in a video eulogy played at the service. “Now is the time for racial justice. That's the answer we must give to our children when they ask why.”

Hundreds of mourners visited the Fountain of Praise Church in Houston, Texas, to pay their respects at the funeral of George Floyd, who was killed by a Minneapolis police officer on May 25. Floyd’s death has sparked weeks of protests against police brutality in cities around the world.

Biden made no mention of his opponent in November. But other speakers took swipes at President Donald Trump, who has ignored demands to address racial bias and has called on authorities to crack down hard on lawlessness.

“The president talks about bringing in the military, but he did not say one word about 8 minutes and 46 seconds of police murder of George Floyd," said the Rev. Al Sharpton, the civil rights activist. "He challenged China on human rights. But what about the human right of George Floyd?”

Most of the pews were full, with relatively little space between people.

“So much for social distancing today,” the Rev. Remus Wright told mourners, gently but firmly instructing those attending to wear face masks.

While the church service was private, at least 50 people gathered outside to pay their respects.

“There’s a real big change going on, and everybody, especially black, right now should be a part of that,” said Kersey Biagase, who traveled more than three hours from Port Barre, Louisiana, with his girlfriend, Brandi Pickney. They wore T-shirts printed with Floyd’s name and “I Can’t Breathe.”

Floyd served nearly five years in prison for robbery with a deadly weapon before becoming a mentor and a church outreach volunteer in Houston. He moved to Minnesota several years ago through a program that tried to change men’s lives by helping them find work in new settings.

At the funeral for George Floyd, Floyd's niece Brooke Williams gave an emotional speech about the systemic injustice that led to her uncle's death, saying, "These laws need to be changed. No more hate crimes, please. Someone said, 'Make America Great Again'. But when has America been great?"

At the time of his death, Floyd was out of work as a bouncer at a Minneapolis club that had closed because of the coronavirus outbreak. He was seized by police after being accused of passing a counterfeit $20 bill at a convenience store.

Four Minneapolis officers were arrested in his death: Derek Chauvin, 44, was charged with second-degree murder. J. Alexander Kueng, Thomas Lane and Tou Thao were charged with aiding and abetting. All four could get up to 40 years in prison.

Some of the mostly peaceful demonstrations that erupted after Floyd’s death were marked by bursts of arson, assaults, vandalism and smash-and-grab raids on businesses, with more than 10,000 people arrested. But protests in recent days have been overwhelmingly peaceful.